Meanwhile… we’ve actually been playing games. Each week we recap our recent gaming experiences and tell you what we’re looking forward to, so you can use your time more wisely than we have. Get the interventions ready, we are about to lose Justin and Ethan to crafting, even if no one else seems to understand their obsession. Too bad it’s not as healthy as all of those Angry Bird-aholics out there. 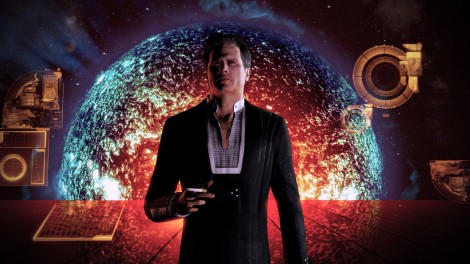 JDevL
With the help of Coopopolopolis’s bro, we sucessfully formed the official Horrible Night guild in World of Warcraft. That also means I’ve been able to play with people I know rather than just going solo with random strangers. The Cataclysm launch was successful for Blizzard, and I couldn’t be enjoying myself more exploring everything that has been updated in my absence. I give it until the end of January before the fix wears off and I start looking for other games to play. However, when I don’t feel like questing I’ll be making climbing to the top of a few more leaderboards on Need for Speed: Hot Pursuit. The game is the best arcade racer to come out in a long time, and already discounted in most stores. What else can I do to convince you to try and beat me?

Colefacekilla
There is no snow where I live, only overcast skies, fog and the occasional rainy day so I don’t have the built in excuse of a snow day. That’s okay though, I don’t need any excuses to play video games. I’m still playing Mass Effect 2 but didn’t get as much time in as I wanted. After taking a long break from Angry Birds, I set out to get 3 stars on all the levels this past week. Frustrating is one word that comes to mind during that quest. I’m actually excited to be playing that game again. Basically I want to finish the single player campaign before I get any of the DLC. Wait, am I still talking about Angry Birds?

Wizardtrain187
Still playing Minecraft but have decided I am a week away from cutting myself off a bit to focus on finishing other titles. At this point in the game I am buidling a city and messing around with the mine car systems. Its still pretty dang addicting and when i’m tired of mining, I start crafting, then when I am sick of that I build, et, etc. Really excited for what this game has for the future but again, I may need to cut it off soon. 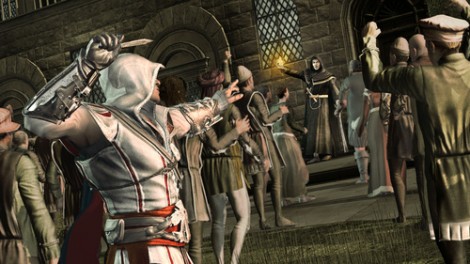 Ezio claims another one

GiffTor
I got to the point that I got frustrated with Halo: Reach because I really want the black effing visor color but it’s still…7 grades above my rank, I think? So I went to GameStop where they had a Buy 2, Get One Free! deal. I picked up Halo Wars (RTS), Assassin’s Creed II and Lost Planet II. Halo Wars, so far (about 3 hours in?) is fine. Yes. Fine. I had never tried to play an RTS on a console and am pleasantly surprised by how well the control scheme was done. It is somewhat dumbed down from some of the PC titles I’ve played, but I think the purpose for buying it was to not play something where I had to pay an absurd amount of attention, sort of like playing an XBL download. And for that, it suits. I haven’t even played Lost Planet II. I read its horrible, horrible instruction manual, which made me mad.

So I started up Assassin’s Creed II. I might as well have started doing blow. Holy crap. I would appreciate it if someone would check in on me every once in a while and make sure I have remembered to eat/bathe, etc. It hasn’t risen to the Messianic status I ascribe to ME2…but I might consider it an early contender for one of the Apostolic roles considering I’ve only had it for two days.

Jadetiger CG
Not much gaming going on this week. Played a little more Comic Jumper, but made no progress. Jumped into Minecraft again, got bored, and stopped. Sent Splinter Cell Conviction back last Tuesday and I’m still waiting for Gamefly to confirm they got it. I may have to cancel it. It takes 3-4x longer than Netflix and you never get what you ask for. 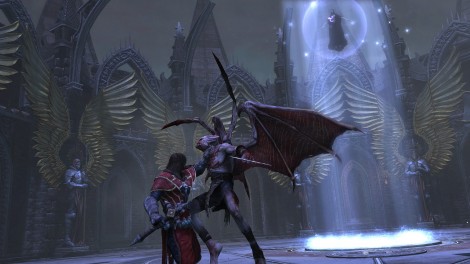 Vampires have been confirmed... finally

streetalchemist
Yes, I’m still alive and playing games! I’ve been currently obsessed with a few good ones. I’m currently neck deep in Castlevania: Lords of Shadow and think it’s the longest I’ve actually spent actually progressing through one AAA game without switching things up since I went through all of Super Mario Galaxy this summer. The more I play that game the more I love it. I hit a lull with it for a week or so but as soon as I got past that I got a really good handle on the controls and am having a ton more fun with it now.

Next up, is Trade Nations, a little iOS game kinda like Farmville except not so douchy… you pretty much progress by building a little medieval village… that’s about it, but it’s fun. It’s one of your typical “play for free, but pay to progress faster” type of games but I proudly haven’t spent a penny on it yet :) Last, but not least is Infinity Blade which I’ve been playing non-stop for the last 5 days. It’s the $5.99 iOS game that flaunts the Unreal 3 Engine and demonstrates what it can do with flying colors. I won’t give much away since you can expect a review up on the site soon, but the storyline and gameplay is GENIUS!

I’ll likely just be continuing with those three for the foreseeable future. Or at least until I get Donkey Kong Country Returns!

Coopopolopolis
I’m looking ahead to another gameless week. I do have the house to myself this weekend so I might have some time to squeeze a little time in there as long as I get all my Christmas shopping done. As far as what I’ll play who knows. I’ll more than likely try finish up Halo: Reach. I’ve kind of had an itch for Red Dead Redemption. It’s been long enough that I might not be bored with it.

Dimmett
It’s been a slow couple of weeks for me with gaming. I’ve been playing more of the same COD: Black Ops, Battlefield Bad Company 2 (with the new maps), and randomly some Dirt 2. I’m also trying out the new iPhone game Infinity Blade which is pretty nice, my only complaint is that it doesn’t let you move around like the tech demo did. Besides that small complaint, the graphics are top notch. I never would have thought you could put a game that looks as good as a 360 on a iPhone but they did it.