Every person who identifies himself as an -er remembers the watershed moment that made them want to be an –er, and by –er, I don’t mean the onomatopoeic word used in conjunction with “Um” and “well,” I mean the suffix attached to activities to make a person a part of a group.  E.g., a soccer player, a dog lover or, in this sense, a gamer.  Earthsiege was the watershed moment for me.  It pushed the limits of my computer at the time, taught me the importance of mastering WASD controls instead of trying to use the arrow keys, and setting up macros on the F keys. It also helped me learn the very important lesson that no matter how cool the Colossus-series of robots was with its abilities to carry two rocket pods, a mass driver, large-scale fast-recovery laser cannon and jump jets, sometimes a Roadrunner-series with nothing more than a single head-mounted medium laser was enough to get the job done, assuming you mastered circle-strafing around the Cybrid-produced Mastiff-series quadrupedal mechs. But that goes without saying. 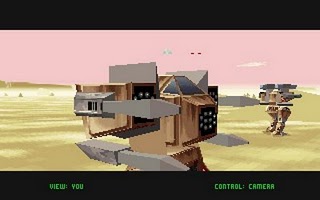 External camera work at its finest

Simple as a robot can get

Despite the impact that this game had on me, not in the least because of the window into the future of particle modeling and physics processing units, I don’t really remember the plot beyond what Wikipedia told me and I can’t even remember if I played it all the way through to the end.  But in thinking about it, I do remember how much I hoped that mech games would never go away and how great it was to play a game that aimed high in its technical performance and design but didn’t get distracted by extraneous b.s.  There were no mini-games, there was no meaningful interaction between my silent protagonist and NPCs and the cut-scenes, if I recall correctly, generally involved painstakingly pre-rendered combat between mechs I couldn’t afford yet and at least a thousand polygons on the screen at the same time. 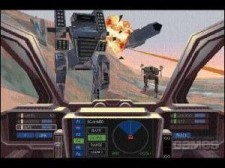 Earthsiege is a decade and a half old and when I remember playing it, it is a real-life example of 13-going-on-30…but when it came time to sit down and write my first retro review article, I felt compelled to write about this game. Its graphics were pushing the envelope at the time but they hardly even measure up as retro-cool now, like Double Dragon.  There was some storyline, I’m sure of it, but I remember Wing Commander better.  Although I know that I bought an after-market sound card for playing Doom (shareware), I don’t know if that was pre- or post-Earthsiege.  But Earthsiege was the game; without it, I might not have the -er attached to “game” when you are describing the groups that I fit into.  And regardless of all of the reminiscing, it had something else that few games seem to have today: a clarity of purpose.  There was no moralistic quandary, love interest or sidequest.  There were giant robots with lasers and missiles and jump jets and no sidekicks – that was it, and that was enough.

So, for those that still remember it, cheers.  And for those who are too young, I hope that the game that makes you a gamer strikes you in the same way that Earthsiege struck me.