Minecraft was supposed to be a distraction, a taste test that should have ended with an indifferent shrug and a mouse click on to the next game in my library. I’d read all the stories, but never bought into the hype. It sounded more monotonous than fun and honestly had been turning my nose up at the graphics (something I rarely do). It’s been 24 hours since I first signed on to the cubed world of Minecraft and I just realized that writing this article is taking away from my Minecraft time…and one can never have enough Minecraft time. 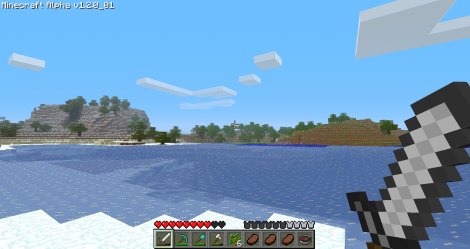 For those of you that haven’t heard about Minecraft, I pity you. The grey and black palette of your life must be horrible in contrast to the vibrant colors that Minecraft has brought into mine. I still experience those drab emotions, but only when I’m not playing Minecraft. Perhaps the simple visuals of the experience don’t cut the mustard for those of you that prefer glitz over heart, but they begin to grow on you and after while every other game just looks overly complicated.

More than a Game

Minecraft is all about mining, crafting  and adventure! The adventure flows like gravy on a southern buffet and the free flow sandbox style game play gives one endless opportunities to explore, build things and make friends… friends that no one else can see but still, friends nonetheless. The greatest thing about Minecraft is the storyline, one that common folk will never understand as it does not present itself easily to the neanderthal minded non-Minecrafters. It is a story that spans eternity and must start and grow within the enlightened mind of a person expose….introduced to Minecraft. 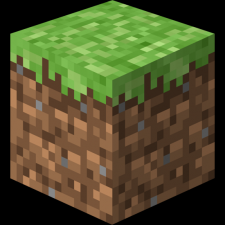 Much more hassle in real life aka stupid life

Everything I see reminds me of Minecraft and this pleases my brain, but the real world is not as grand as the world in Minecraft, which I have dubbed “Sensationapolis.” I tried deconstructing the soil in front of my home yesterday in order to harvest it for later use. I was disappointed to find that it did not form into perfect cubes and required hours of manual labor. My real world “wife” was not happy with the mess I made, despite my reassurance to her that deep below the surface treasures awaited. She does not love Minecraft, thus her title gets quotation marks in order to convey that at this moment, such a relationship is symbolic at best.

I spent 3 hours building a bridge from the island hub of Sensationapolis to the mainland, a heavily wooded location that will eventually become the home for low cost condominiums and a mall. It was a daunting task that required the methodical harvesting and placement of cubes, something the foolish World of Warcraft players refer to as grinding.  Grinding has a negative connotation (unless done at a high school dance of course) and I feel such words are the difference between those that play WoW and those that experience Minecraft. We don’t grind, we create and the sky is the limit for what we can produce. There are so many blocks with so many block enhancing properties, all with their own special place in my fantastic metropolis.

In addition to creating buildings and other structures, Minecraft also has a very interesting and useful crafting mechanic that utilizes the blocks mined from the earth. Tools, decor and other items can be created from certain blocks and range from easy to complicated. The pleasure that derives from these activities can appear boring to some, but those people are morons. They would never survive in Minecraft. 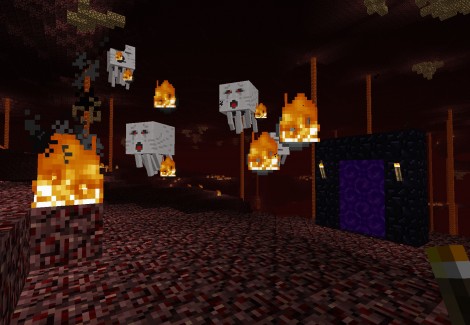 Fear is real in Minecraft

But the land of Sensationapolis is not completely safe from danger. It harbors creatures that make the pitiful dungeon inhabitants from WoW look like diaper wearing children who have pooped their diapers out of fear after seeing the monsters in Minecraft. They come in form of zombies, skeletons, spiders and tend to attack in the night, which makes competent shelter a necessity. Stumbling upon scary monsters is really creepy when you first start your experience with Minecraft and hear a low moan or growl emitting from the shadows of a cave. Fortunately, the crafting abilities bestowed upon me by the Minecraft gods allow for the creation of weapons and armor for protection. Battling these threats, while simple still gives me a sense of accomplishment.

A work in progress

The most amazing aspect of Minecraft is the fact that it is considered unfinished. The fearless creator, one known as Notch has promised updates to further our new lives, all at the low cost of  $13.00. Strike now, however as the price will go up once the improved world, known as “Beta” is released. This improved world will allow me to make friends that are considered “real” by outsiders and interact with their day to day exploits. 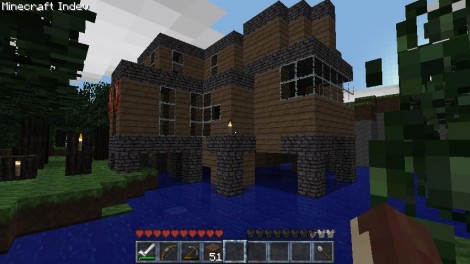 Note: This article, while seen by most as a review, should not be considered as such because reviewing constitutes an item can be judged by mere mortals. Consider this an enlightenment of sorts.

2 Comments → Minecraft Wants Your Soul, Just Give In