Over the years, I’ve developed into a very methodical gamer when it comes to any game that has aspects of exploration. Games take me much longer than they should, but I get my money’s worth. I try to get to know the boundaries of the game world in front of me and if it’s engaging enough, I try to find every place I’m not supposed to be able to get to. However, just once I’d like to play a game that punishes me for testing its boundaries. Not by glitches or crashing, but by actually catching me in the act and ending the game or making it impossible to complete a goal. I call it The Dumbass Law. 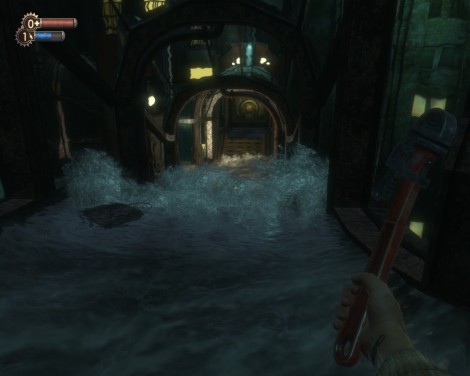 What'd you think was going to happen?

I’ll use a simple example from BioShock:

If I am dumb enough to try and explode the glass protecting Rapture from the ocean with frag grenades, the glass should give way and I should drown slowly and painfully.

It would be unexpected easter egg, but at the same time how could you get mad at the game for killing you for taking actions you obviously shouldn’t.

Well, that was a short game.

The only game that has come close to fighting back would be Eternal Darkness with its insanity tricks. I would intentionally get my sanity bar as high as it could go just to see what would happen, and then it tricked me into thinking I had deleted my game. I was seconds away from throwing my controller through the screen, and years later I can’t stop talking about it.

Honestly, if a game was smart enough to react to moronic actions of the user without affecting the difficulty of the game, I’d find it endlessly entertaining. The developers could use it to set boundaries for the gamer to keep them focused on the experience, or they could do it just to be cruel and funny. It would become a Darwin security system for sophisticated games. Only the true dumbasses would become frustrated and stop playing, which is never a bad thing.

2 Comments → How You Play the Game: The Dumbass Law