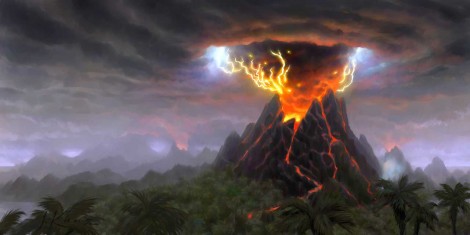 By name alone, patch 4.03a, seems like just another update to the World of Warcraft. This is no ordinary patch though, this has been dubbed “The Shattering” and Azeroth will never be the same after patch arrives this week.  This patch is to prepare the live servers for the arrival the Cataclysm expansion which literally alters the terrain of the main continents, and removes (and adds) content to the game forever.

For explorers, like myself, who have left WoW and have no hopes of being wrapped up in end-game content, this reshaping of the land is one of the main draws of Cataclysm, and what separates this expansion from earlier ones.  Gnome and Troll starting areas are changed, thousands of new quests are available for levels under 55, and that doesn’t even include the additions of new races and class combinations available when the expansion is available on Dec 7th. It’s the closest thing we have to a full fledged sequel, so for some of us it’s like the game just launched and it’s 2004 all over again.

G4 has broken down The Shattering and Cataclysm changes including what is live this week and what goes live on Dec 7th.