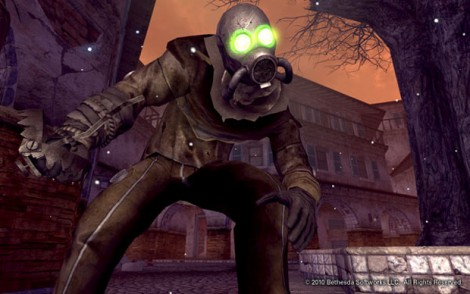 It was pretty obvious that Fallout:New Vegas was going to be getting some DLC and by now everyone knows that aforementioned DLC is “exclusive” to the XBox 360.  Now, Bethesda has released details about the add on, including a December 21st release date.

Titled “Dead Money”, the DLC  revolves around the legendary Sierra Madre Casino, whose grand opening was preceded by the nuclear war that shaped the landscape of the Fallout series. Someone was definitely being optimistic in relation to that blunder. All is not lost however, as the your character will be able to explore the mysterious locale thanks to the convenient interception of a radio broadcast. Sounds easy enough right? Of course not, it wouldn’t be a Fallout game without some sort of catch and that catch involves poisonous gas, weirdos in bio hazard suits and a casino defense system that is described as “substantial” by the game’s senior designer Chris Avellone.

I’ve enjoyed Fallout: New Vegas immensely and am really hoping that Bethesda skips through the mediocrity of Fallout 3’s initial DLC and skips ahead to the quality of a “Broken Steel” or “Point Lookout” type effort. I also hope that there’s less fetching and more questing, but unfortunately someone has to be an errand boy and that usually turns out to be you. Regardless, I’m going to have to wait on the PC since its “exclusive” but maybe one of you Xbox 360 owners will invite me over to watch you play? I’ll bring pop and a blanket just in case we have a lot of fun and I need to sleep over.