Super Mario Bros. turns 25 years old this year and we wanted to know what everyone’s favorite Mario game is. This week’s REPLY TO ALL is all about the games that really cemented our love for video games.

This is a really hard question because there are so many great Mario games, but if I had to choose a favorite it would be the original. I’ve played that game more than any other game in my life and still play it every couple of months or so. It’s certainly not the best Mario game but it’s the only one I have beat in under 15 minutes. I remember when I first saw the game at a friend’s house and was blown away. I didn’t even get to play it but I knew I had to have this. From watching, I learned all the secrets so when it came to be my turn I was ready. 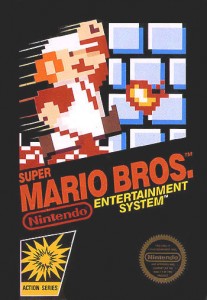 The start of it all for many.

I certainly also have a soft spot in my heart for the original but my favorite would have to be Super Mario Bros 3. As much time as I’ve logged with various games over the years, I don’t think any have come close to that one. I played every second of that game backwards and forwards. Though I haven’t done it recently, even up until a couple years ago I would still pull it out and play through every level. It was such a huge advancement over the first two, with different worlds and power ups and a rudimentary inventory of sorts. And of course earphones whistles (strictly for speed runs). And who wasn’t hyped for its release after seeing The Wizard? I wanted to play Super Mario Bros 3 with Jenny Lewis! I still do for that matter.

The Wizard!!!!!!!! Yes Mr. Ben Leonard that movie was the cats pajamas and also created a place in my heart for Super Mario Bros 3. I recall playing in my childhood, but SMB 3 really made its greatest impact on me during my days as a Boilermaker. 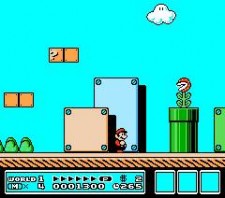 Nintendo really made a leap with SMB 3.

My BFFF (I’ll let you figure out what the extra F is) Matt “Shotgun Hittle” Hittle and I played that game religiously, enamored by the prospect of completing the game without the use of the uber feminine magical flutes. It was during this time that I achieved what I consider the greatest Mario Brothers out my butt obstacle avoidance technique on one of the later air fortress stages, utilizing the often under utilized Mario slide. That cannonball never saw it coming. A close second is Super Mario World, mostly because it was all I had to do during what seemed like an endless stage of awkwardness.

Super Mario World is my answer too.  I talked a bit about it in the last reply to all, but there is something to be said for adding new elements to the game (Yoshi, the switches, etc) and yet stripping out some of the other elements to focus on the more pure platforming experience, which in my opinion remains the standard for 2D platform games.

When you try and figure out why the early Mario games were so overwhelmingly successful compared to previous games and why they succeeded and helped launch Nintendo when the rest of the video game industry was in the toilet, there is one often overlooked key factor.  It wasn’t just level design or the gameplay itself being completely revolutionary, even though both of those things are true- it was the play control. 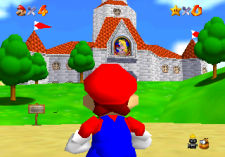 Remember your reaction the first time you saw this?

Play control was so awful and frustrating in so many early games, and Super Mario Brothers was the first one to take a leap forward in that area.  Play control used to be one of the key 3 ratings to a game in the old Nintendo Power magazines- can you imagine seeing that today?  But Super Mario World was another huge leap forward in this particular area- especially when you play it and SMB3 back to back- it just adds even more polish to what was already an extremely polished experience.

Super Mario 64 does win the ‘most mind blowing’ award for me though, but that is one of those ‘you had to be there’ moments. Kids today will never understand, haha.

Not much of a debate for me. Super Mario World is my definitive Mario experience. We’ve already talked about the additions and further polish that this game had, but I also feel that this was the 2nd most significant game for Nintendo behind the original Super Mario Bros. 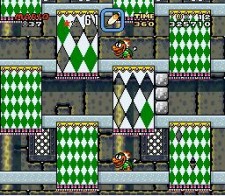 The series just kept getting better.

Without Super Mario World, the SNES isn’t a success and we are talking about Nintendo in the way we talk about Atari these days. It cemented their ability to define the newest console generations. The innovation in SMW is the trademark quality of Nintendo and what they try and bring to all of their major product launches (aside from the Gamecube and Virtual Boy).

Besides historical significance, it’s just the most fun and accessible Mario title. There’s a sharper difficulty curve in Mario 1, 3, and New SMB that they smoothed out in SMW. When I want to go back and play a completionist round of Mario, I reach for SMW. The stars in later titles are frustrating and the earlier titles didn’t encourage exploration to find different exits which is my favorite part of SMW when I see which one’s I can remember.

I’m impressed by Dustin’s list that he’s been able to put so many so far ahead of Mario 3. I figured we’d have a battle between Mario 3 and Super Mario World. I really don’t know where to rank the New SMB games and am surprised for the lack of love for Galaxy.

I’d have to say Mario 3 for me.  I’ve put so much time into that game it’s rediculous.  Like Ben I was super hyped for the release of that game after seeing the Wizard.  Just the variety of powerups and worlds in that game was perfect, from the awesome but useless hammer brothers suit, to world 4 with goombas the size of your mom. Super Mario World plays a close second.  The SNES is probably one of my favorite retro systems, and that game had such a polished look, but I still would go back to SMB3 any day.

I would probably have to say Mario 64. I played that one the most because I didn’t have a NES or SNES growing up. Didn’t have a Wii or GameCube either. So deprived :P. Anyway, I did enjoy playing Mario 3 when I had the chance though. Loved the introduction of  the Racoon hat, but even more than that, I loved the Yoshis in Super Mario World. That’s really when Mario started to get to the next level for me. I’d really like to play some of the newer ones but I really don’t want to waste the money on a Wii. I’ve got 2/3 major consoles right now. I’m good. 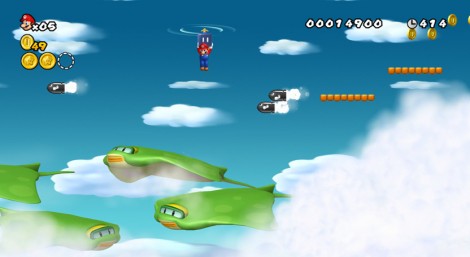 This game will be the Super Mario Bros. for the younger generation.

It’s a me Mario

Because Thanksgiving is next week, we decided to make this a two-parter. While this week was our favorite Mario games, next will be our least favorite and the defense of those games by others. I promise it will be well worth the wait.

4 Comments → REPLY TO ALL: My Favorite Mario