Admittedly, it was never my intention to spend much time with Kinectimals myself, but I had to see it to be able to help any of my friend’s kids play during the upcoming holidays. I was immediately sucked in. The game is much deeper than I expected, and very task driven so it’s easy to lose track of time. The problem is, no matter the details or achievement points involved, at a glance, no man wants to be caught playing Kinectimals by himself. 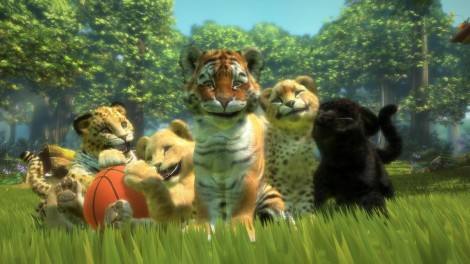 Too cute to be taken seriously

Motion controlled titles get a certain reputation for their simplistic graphics, thanks to the Wii. Part of the point of the Kinect launch titles is to show off how family friendly games can look with more powerful hardware behind them. Put Kinectimals up next to Nintendogs and see what I mean. However, no matter how sophisticated these fur effects are, or how realistic the animal spit on the screen looks, this game is beyond adorable. To a sickening degree. It just doesn’t feel right to play this game without a kid in the room. Don’t even think about trying to show off your latest tricks to your bachelor buddies as your spin move is much more Barney than Dwight Freeney.

Lost in all of the “You are the Controller” B.S. of the Kinect launch was the inclusion of the microphone in the device. The first time your Kinectimal responds to the name you gave it is a defining moment for this device. Pretty soon you are giving your pet commands and you lose yourself more and more in the experience. You may find yourself talking to your pet in that cute baby voice that doesn’t even appeal to babies or pets. Pretty soon you forget that the game only picks up on key words and you are telling your life story to this CG creature. Let’s just hope this thing can’t talk by the end of the game. 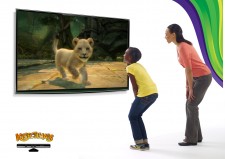 I’ve been trained to expect the bare minimum out of launch titles. All of the previews and trailers led me to believe that all Kinectimals had to offer was a pet, a field, tricks, and toys. Little did I know that some annoying “Bumble” character was going to fly us around a world map. Seriously, this game has a host and goals that unlock new areas of the island where you and your pet live. The entire point is to drive you to explore and find the mysteries of the island. This is where I got worried, on one hand a lot of this is going to be much more sophisticated than toddlers can handle. On the other, this is exactly the type of thing where I can measure my own progress and start to care about achievements. I’m no longer sure who the target audience is for the game, but I’m scared I have a reason to keep coming back.

The last concerning feature I discovered during my initial romp with Zorro, was the RC car. You drive the car around the field collecting coins and your pet gives chase. I discovered something more primal at work when your goal becomes to knock down totems that have appeared in the field. You can chase and run into your pet with your car. For some reason this gave me 10-15 minutes of hysterical laughter. Which opened up the door to trying to find all of the reactions the pet gives when you mess up and hit it instead of your target. Not only do you look like a complete douche when driving with your fantasy steering wheel, but now it looks like you should be reported to the ASPCA.

Don’t worry though after all of this shame and destruction, Zorro still loves me. Even if the world shuns me, and I abuse him. And that’s what really matters.