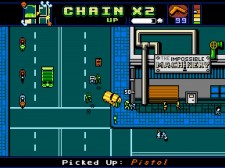 One of my more historical jaw-dropping gaming experiences occurred the first time I played the original Grand Theft Auto. I had never played a game that allowed you so much terrible freedom. Stealing cars, running over the owner, and gunning down pedestrians was good devious fun and feel entirely different than its more lifelike 3d sequels. Retro City Rampage sets out to restore the top-down glory of the classic crime game, but reaches even further back by giving it a distinctly 8-Bit appearance. The game doesn’t limit itself to GTA influences, expect nods to games of the 8-bit era, like Contra, throughout this very self-aware title. Check out extensive gameplay footage in the trailer above.

Retro City Rampage is being developed by Vblank Entertainment. It will be released in the WiiShop this December, and they are in talks to come to PSN/XBLA next year.