For those of you who don’t know, you can find some pretty good games on the cheap on Xbox Live Arcade. We’ve mentioned before that $15 can buy quality games that can be as good if not better than retail boxed games. Now we can add another must buy to that list: Costume Quest. Even though I miss trick-or-treating, at my age it is kind of creepy if I head out to take a candy grabbing lap around the neighborhood. Costume Quest doesn’t give me candy, but it does allow me to enjoy Halloween without leaving my living room. 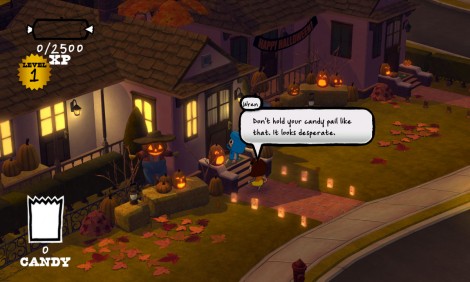 In Costume Quest, you take on the role of Reynold or Wren, twins who are going trick-or-treating on Halloween. I chose Reynold, the brother. After being designated ‘in charge’ by the mother, you take your twin sister out to round up some candy and make fun of her candy corn costume in the process. She gets kidnapped by a monster who thinks she is actually candy. You see, monsters have invaded houses looking for candy to take back to their leader Dursilla. You set out on a quest to rescue Wren while using your costume and its abilities to help you on your way.

I can’t talk about anything else before I talk about the costumes. Every kid imagines their costume to look way cooler than it actually does. In Costume Quest, this imagination is used to drive the battle system. When your character is not fighting, the costumes look cheap and are clearly homemade. That’s not to say they don’t all have their own charm, but once you are in the battle, the real show begins. A boxy chest and head in the real world turns into a Transformer like robot that shoots missiles out of its chest. I don’t want to spoil any of the other costumes, there are a total of ten, so you need to play the game to see how creative Double Fine was in making this game.

Simple Can Be Good

The game is a very simplistic RPG, one that could be used for children to break them into the genre. But don’t let the ease of the game put you off. It has loads of charm that will draw you in. The gameplay is simplistic to be sure, but that doesn’t mean simple isn’t fun. It’s the effortless nature of choosing your attack and doing a timed button press in order to fully execute that attack that made it so endearing to me.

Wait until you see the Statue Of Liberty's Special Move

While the battles definitely get repetitive (even the boss fights are the same), the appeal of the game doesn’t let it get boring. Outside the battles, you are basically trick-or-treating. You knock on doors to get candy. However, not every door has a nice neighbor behind it. Monsters have broken into houses to steal candy and they aren’t afraid to fight you for it.

There are three main areas of the game: Auburn Pines Suburbs, Autumn Haven Mall, and Fall Valley which includes a carnival. While each place is different in the way it looks, they are basically all similar in nature. But it’s not all trick-or-treating. There is a bobbing for apples mini-game whose proprietor has some ulterior motives. For those collector people out there, there is a couple collect-em-all items: battle stamps and creepy treats. Battle stamps are power ups that you attach to each character for certain bonuses in battle. Not that you would think any different, but they all have a Halloween theme to them. The creepy treats are collectible cards you receive during battles. They don’t give you any abilities or bonuses, but you will find kids looking to trade some throughout each level.

Even though I enjoyed the six or so hours I spent trick-or-treating in Costume Quest, the game is really easy. I only died a few times throughout and that’s because I wasn’t really paying close attention to my health. The last boss can be difficult, but once you figure out which combination of costumes to use, he’s a breeze. It seems like this could be a trend setter in a seasonal game and it was perfect for the time of year it came out. I might come back to it next Halloween, but it doesn’t seem like a game I’ll want to play at other times during the year. 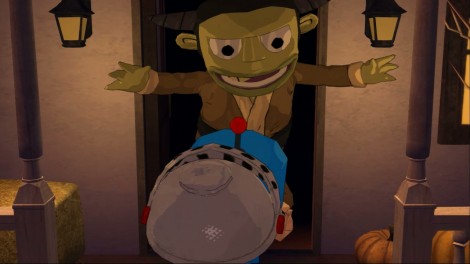 For those who like more difficulty in their games, you should probably stay away. However, if you like a game that has a good art style and a good sense of humor you should check out Costume Quest. Oh, and it’s an easy 200 achievement points if that tickles your fancy.