With so many details to love about Enslaved: Odyssey to the West, the moment that really struck me is one of the most intangible yet core elements that games seem to be missing these days. Right in the middle of my adventure when I successfully fended off another horde of mechs in destructive slow motion glory, I realized that I was having a blast playing this game. It isn’t immediately apparent, as it takes a while to see through its quirks and borrowed gameplay and story elements, but when Enslaved comes together it is one of the most refreshing games of the year. 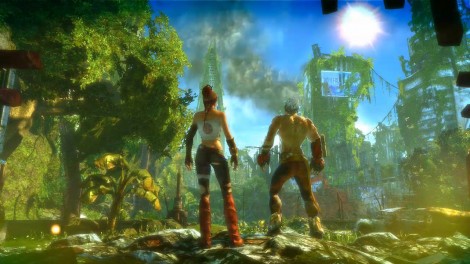 Ohhh, pretty. I mean, besides the death and destruction

Enslaved is a loose retelling of the classic Chinese tale, Journey to the West, which immediately gives the story some gravity even for those, like me, who are unfamiliar with it. The game is set in a post-apocalyptic world hundreds of years after mechs have taken over. The human population that survives is being picked up and enslaved through the use of mind controlling headbands. Your character, Monkey, wakes up in captivity on a slave ship that is about to crash. Using your brute strength and agility you escape only to be knocked unconscious back on Earth. Before you can wake up, Trip, a smart but frail teenage girl, fastens a slave headband to your skull. She needs your help getting back home across the mech filled remains of New York City. She has promised to remove your headband once you make it safely home, but if she dies along the way, the headband will kill you, too. You have no choice but to escort and protect her from the dangers that lie ahead.

I was told the apocalypse was brown

This isn’t your typical looking post-apocalyptic landscape. The world of Enslaved is lush with plant growth and vibrant colors that immediately set it apart in its genre. That’s the essence of Enslaved. Everything from the story to the gameplay feels familiar but has an extra layer of detail on top that makes it unique. The characters and voice acting are all well done, but it’s the subtle performance factors like facial expressions that end up pulling you in. Andy Serkis, of Gollum fame, is the game’s director as well as motion capture actor for Monkey. The team continues to perfect their motion capture craft since their previous game, Heavenly Sword, and the characters feel a lot more alive because it. Sure this is purely the presentation layer for Enslaved, but this is the definitive third person action game experience for being pulled into your character’s world.

I'd let Trip enslave me.

I’ve played through plenty of games where the story is my only driving force, and initially, I feared that was the going to be the case with Enslaved. You will spend a majority of your time in the game climbing and jumping your way from platforms inbetween fighting and shooting mechs with your staff. There are also computer controlled co-op moments with Trip where she can use different skills to distract your enemies or help you solve puzzles. She’s not exactly a huge help, but she doesn’t get in your way either. Controlling Monkey feels a bit loose when you first start playing the game, and timing your platforming and attack moves takes some getting used to. To be honest, I was pretty put off on it in the beginning and distracted myself with the setting as things got rolling. Before I knew it though, I was handling multiple mechs at once and swinging from ledge to ledge without a breaking a sweat.

You thought Donatello was a bad ass

The battles themselves get progressively harder as different combinations of mechs are thrown your way. By the end of the game, I had my strategies down and could survive most confrontations without being hit; is a baffling realization compared to my first fights. It’s not to say that the game is easy (I played on hard), because if you lose focus on what you are doing in a fight you can quickly become overwhelmed. However, the feeling of satisfaction I got from finishing the larger fights only increased as I continued through the game. You don’t level up your skills (even though you can purchase upgrades), but I did feel that I was becoming a better player. 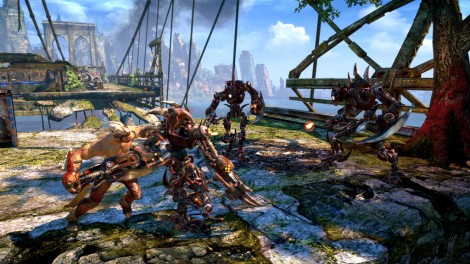 I'm going to bash your metal brains in.

The game tries to mix things up with each encounter. Some mech fights can be solved by avoiding them completely or by hijacking a mech with a gun. You’ll have to fight multiple mechs while trying to platform your way through the level to solve a puzzle in time. There are also a few boss mechs with a balance of puzzle solving and fighting to keep you engaged. By the end though, I felt unstoppable when it came to fighting the grunt enemies so I was on the look out for the next major encounter.

Just when you start to master the world of Enslaved, the story kicks starts to kick back in for a memorable climax and conclusion. Alex Garland, the author of 28 Days Later and The Beach, wrote the story for Enslaved, that again, seems familiar to a lot of other games and movies, yet satisfies in ways that most games have failed. You think you know what elements the story is going to focus on, and in the end it resolved what it needed to and left the right questions unanswered. Everything about it felt like it found the right balance between video game and movie and stands as an example of what this medium is really capable of.

As with most action-adventure titles these days, Enslaved doesn’t offer much in the ways of replayability. Which makes it a rental for most people, but as a fan of this genre I can say Enslaved is one of the most memorable games I’ve had the pleasure of playing through. Its quality comes from the sum of it’s better the average parts. Every piece of it has a stand out moment. Sure, you can find games that have better stories, characters, graphics, and gameplay, individually. You can also find AAA budget titles that bring everything together a little bit more polished. Enslaved is a stand out title from an up and coming developer that you will look back on as the beginning of their greatness. Enslaved‘s story and characters will stick with you long after you have put the game away, but don’t be surprised if it calls back to you years later for you to take the journey one more time.