Fallout 3 grabbed control of me in October of 2008 and didn’t let go until sometime in July of 2009. I put close to about 130 hours of play time into it and only stopped when the purchase of a new home and wedding planning took precedence. Never have I been so enamored with a game and never have I been so sad to put it down when all content had finally dried up. To say I hotly anticipated its pseudo sequel, Fallout: New Vegas, is an understatement. Imagine that night before Christmas feeling only multiplied by a billion.

It’s been about two weeks since Fallout: New Vegas finally arrived and my journey into the wastes of the Mojave Desert has been going on for about 30 hours. Most games would be over by this time, but the end is nowhere in sight. I’ll go ahead and state the obvious, the game is a face melter. For those unaware of that metaphor, it means awesome.

Peruse the webernet and you’ll find more than enough critical commentary, so much so that I’ve actually seen iterations of my own feelings toward the game repeated over and over. Yes the graphics are dated, yes the game play can be buggy and yes, it does teeter on that line between sequel and expansion. The amazing thing about Fallout: New Vegas though; none of that matters. 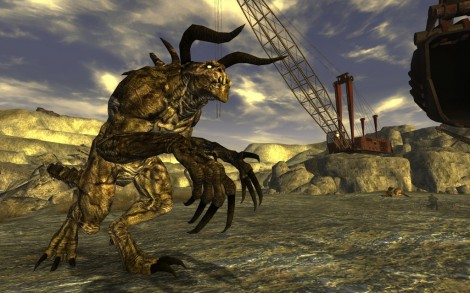 Not sure what animal that used to be

To me Fallout: New Vegas is like a cute girl sipping on a micro brew while every other woman in the bar wears low cut shirts and chugs cosmos. Good looks and simplicity can be fun but the longevity isn’t there. Those looking for a quickie should divert their attention elsewhere… New Vegas wants a long term relationship.

One of the best things about this series is the player customization options you have. Based on what skills and perks you choose determines everything from your preferred weapon to how certain missions play out. You can be a stealthy assassin, a hard-nosed gun slinger or even try your hand at resolving conflict with Loggins and Messina like smoothness.

The thought that counts

Fallout: New Vegas demands that players take a thoughtful approach to every action taken during their time in the Mojave Wastes. While its quite possible to take a viking like destroy and pillage strategy to conquering the game, many opportunities can be lost if care is not taken in how certain scenarios are approached. With the inclusion of a rather deep faction system, these choices are further complicated. Its not just a choice of playing the game as a good or evil character, rather you have to think about who you are being good or evil towards. Piss someone off early on and you may miss out on missions later. Its pretty interesting and gives an already highly re-playable game even more re-playability. 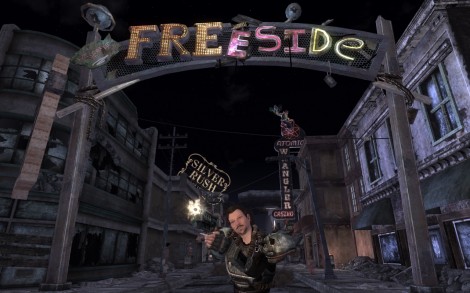 Shooting guns at people is poor incentive for visiting Freeside

There is just so much to do and so many ways to do it in this game. The main plot seems interesting but good luck sticking solely to the story quests. The game distracts you at every turn, making the vengeance laden plot take a back seat to a myriad of adventures that include everything from zombie battles to arms sales and everything in between. Some of these side quests can get tedious, but the game does a great job of putting incentive out there, whether it be new gear or the introduction of a new character or area. Exploration is a huge component and wandering the desert is often rewarded with interesting discoveries.

If you didn’t like Fallout 3, then you won’t like this game. New Vegas doesn’t deviate too much from the foundation set forth by its predecessor and borrows heavily from Fallout 3’s template of models and texture maps. The additions made, including weapons mods and an extensive crafting system were enough to freshen up the experience for me but I can see how some may be a bit disappointed with the similarities between the two. Still, I am confident in saying that those who loved Fallout 3 were chomping at the bit for more of what they love and New Vegas definitely offers that and then some.

I highly recommend this game to anyone, especially budget conscience gamers that need to stretch out an experience. There’s something for most everyone in this game and with Bethesda’s dedication to DLC, you know there will be a lot more. Don’t let the questionable graphics and internet buzz prevent you from experiencing one of the deepest games to be released in a long time.