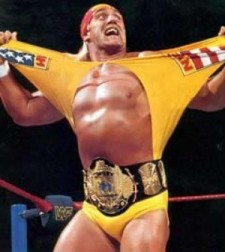 Before he was a rap star.

That could be my wrestling bias coming out, because he’s currently ruining TNA with an nWo clone called, after Hogan himself, Immortal. It’s dumb. Hogan’s dumb and the WWE’s version of Brooke, Jillian Hall (whose gimmick is that she’s a horrible singer), sings better than Brooke can.

All that negativity doesn’t mean I don’t enjoy this video immensely. Hogan proves he can rap which leads me to think that he should release an answer to Be A Man Hulk, “Macho Man” Randy Savage’s diss track about how he wants to fight Hogan for real.

With Def Jam Rapstar‘s ability to take 30 second clips from each song you perform, that rap battle can happen on their website. Imagine the possibilities.

Putting my bias aside, there’s nothing better than making a fool of yourself in front of friends and family. Hogan just does it in front of millions of people and I can appreciate that. I hope we see more of these videos and I really, really, really, hope Macho Man does one. OHHHH YEEEAAAAHHHH!

If you don’t know, now you know. BROTHER!