It’s been over 15 years since I last followed the Halloween tradition of knocking on a barely known neighbor’s door and asking them to make a difficult life decision. So that’s 15 years of forgetting things that I spent my whole childhood learning. Thanks to Double Fine‘s timely release I can learn things I never knew before courtesy of Costume Quest.

The Lessons of Costume Quest 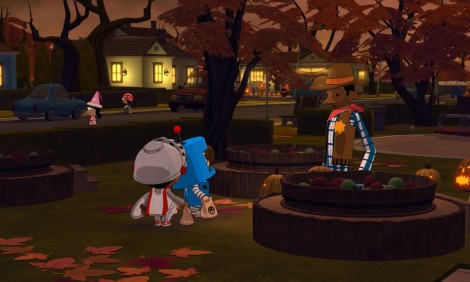 You can get candy bobbing for apples.

Candy is Everywhere, Hit Everything

Back when I was trick-or-treating, you had to go knock on doors to receive candy. Apparently, that is no longer the case. Candy hides in mailboxes, pumpkins, piles of leaves and even trash cans. I don’t know about any of you, but these are the last places I look for candy. Unless it’s one of those plastic pumpkins made for holding candy, I don’t go near those vile things. They always look so menacing. When you take your kids out trick-or-treating make sure that they hit everything with their candy bag/bucket/tote/pillow case. Thanks, Costume Quest.

Switching Costumes Can Be Advantageous

A robot and the Statue of Liberty walk into a bar...

How many people have ever switched costumes the night of Halloween? Unless there was some mishap involving mischievous paraphernalia, most people keep the same costume on for the duration of the evening. Hell, I even used the same costume over and over again. A good Jason mask is hard to come by and I loved the Friday the 13th movies, sue me. Had I known that changing costumes throughout the night would open up opportunities, I would have done so in a heartbeat. Even changing into a girl’s costume can provide endless benefits. They even come with kick ass super powers. Thanks, Costume Quest.

I always thought stamps were things that you put on mail in order for that piece of mail to travel to far off lands. And I always thought that stamp collectors were lame. Little did I know that stamps can give you added abilities on the night of All Hallow’s Eve when faced with dangerous mobs of simple minded monsters on the hunt for candy. These stamps are hard to come by but can be bought by the local stamp seller. Don’t have any money? Candy is the only currency you need. If you follow the first lesson and hit everything you see, you’ll be rich enough to afford the stamps. Thanks, Costume Quest.

Don’t Make Fun of Your Sister

Candy corn: the vilest of all candies and corns.

I must admit, this was the hardest lesson for me to learn. I love making fun of my sister. It’s so easy to do, but it’s not something I’ll ever do on Halloween. Even if she’s dressed in a crappy costume, I just have to take the punishment my friends dish out at me for trick-or-treating with someone who looks lame. Above any other day, Halloween is about looking cool and I can’t look cool if my sister looks dumb. Having said all of that, monsters might mistake her for candy, even though she could never be so sweet. Being the oldest, I have to be more responsible, so putting her in a dire situation ultimately falls back on me. Luckily I learned how to avoid getting my sister kidnapped. Thanks, Costume Quest.

Costume Quest has given me the tools to get back out there on Halloween. I am no longer afraid to brave the elements, put on a costume and convince strangers to give me candy. Thanks, video games.