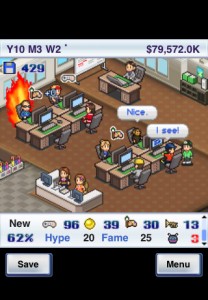 This is where the magic happens

I’m still having trouble comprehending just how much time this iPhone app stole from my weekend. It appeals to a small niche audience of gamers with game development aspiration and an affinity for sim games. Being a part of that group though, I can attest that this game is a dangerous time sink waiting to happen. I almost didn’t purchase it for that reason alone.

The concept takes addictive nature of the Sims, Tycoon, and Football Manager series, applies it to running a game development company, and sticks it on the iPhone for $4. After starting your game company you have to hire your first employees and take on some development contracts to earn enough money to build your first game. The goal of course is to build your company up to create a game that goes into the Hall of Fame. Along the way you train your employees to build up their skills, advertise for your company and games, attend game conferences, go to the yearly awards show, in hopes of building your fan base. The industry grows around you as new consoles flourish and fail. Earn enough money and you can even build your own console. 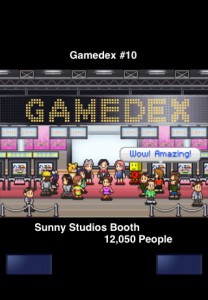 The game development itself is separated into a few steps. First, you choose or acquire a license for the console you want to develop for based on their popularity. Then, it is time to choose a genre and game type so you can make that Samurai Music title that everyone has been asking for. If you have the budget for such a risk, it’s time to move into development. Now, it’s time to select your project leads for concepting, graphics, and sound. Every staff member and contractor has stats in coding, scenario, graphics, and sound which effect their contributions to the project in fun factor, creativity, graphics, and sound. Of course before you can ship the game, you better remember to debug it because you don’t want that Samurai singing off-key. Ship the game, check out the review scores to see if you made it to the hall of fame, and watch as the sales roll in. But don’t stand around too long, you have another game to make.

Are you as evil as Activision?

Game Dev Story can be a bit overwhelming at first since the calendar is always moving when you aren’t actively managing dialog box. It took me about 3 restarts before I felt comfortable with where I was headed, but I went from producing 2 games in the first hour or so to having close to 30 before the weekend was out. Sure managing menial tasks can get repetitive, but it always feels like you are making progress and injecting creativity into your decisions. Those decisions fuel the addiction that drives you to complete just one more task. But how else are you going to see if the sequel to your Antoine Dodson Dating Simulator makes it into the Hall of Fame? If the answer to that question motivates you, I both recommend you give Game Dev Story a shot and stay far away from Game Dev Story.

WTF Is This – It’s weird, it’s game related, you should probably look away, but we’re going to look at it anyway.