Disclaimer, I am no where near being done with Castlevania: Lords of Shadow. But I have hit an impasse with the game after 6 hours of play. 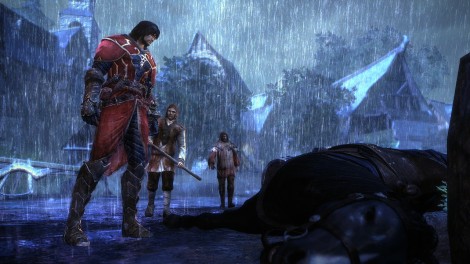 I am not entertained

I was ready to love Castlevania: Lords of Shadow. After all it’s the most polished 3D version of my favorite series. I wanted finally wanted to see it conquer the 3rd dimension and take the character based action game genre to its next step. I realized, after throwing my controller down from boredom during a giant boss fight, that it is more like a half-step back and to the side. The game seems content with being average and letting others lead the way.

I’m a huge fan of character based action games, mainly because they evolved from the style set forth by Castlevania and other early action adventure titles. God of War, Devil May Cry, and Ninja Gaiden rank as some of my favorite experiences of the previous gaming generation and of all time. However, even those trend setters suffered from not being able to push the genre forward with their sequels. C:LoS has a lot in common with these good-but-not-great sequels and even openly borrows a lot of their gameplay elements just as they did from each other. C:LoS even goes beyond these cousins to borrow elements from games like The Legend of Zelda and Shadow of the Colossus to broaden the scale and exploration features of the game. Everything looks fantastic on paper. Unfortunately, this game isn’t played on paper.

The problem is that the execution of these game features in C:LoS is even more flat than those other action adventure sequels. Climbing and platforming feel forced and deaths are unpredictable. The Quick Time Events (QTE) are repetitive and rarely satisfying. The action feels great when you use the basic attack moves, but the big combo moves, that you have to purchase, aren’t worth the effort since most enemies can avoid them. It wouldn’t stand out as much if your character, Gabriel, could dodge just as easily, but more often than not you’ll find yourself rolling right into an unblockable attack. The dodge move takes just a split second longer to execute than is necessary. All of the core mechanics C:LoS has to offer has done better in other games. 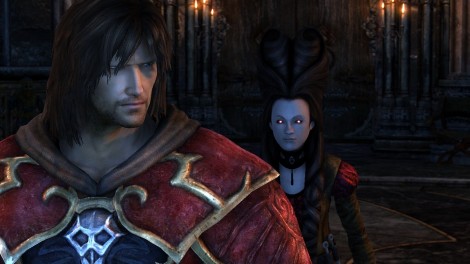 At first, the lack of gameplay polish wasn’t enough to deter my enthusiasm. I usually interpret that as the developer, in this case, MercurySteam, spent their time focusing on making some other aspect of the game shine. I was just hoping that this was going to be their unique take on the Castlevania name and story. On it’s own, I’m still very much engaged and intrigued by the story, characters, and the world of C:LoS. The story and fate on this new take of a Castlevania world will carry me through to the end when I eventually make it through. However, at this stage I can fully say this is not Castlevania in story or setting. Whips and a Belmont aren’t enough to call yourself Castlevania. As of the writing of this article, I see no signs of Dracula or the summoning of Dracula, nor do I see any reference or promise of a (magic) castle. Not that I mind the setting on its own, but without some sort of tie-in to the dark lord and castle’s master it just doesn’t feel like Castlevania. It’s a wasted opportunity for the series and a genre that could use a grand gothic adventure.

With rumors already starting about a sequel to C:LoS, I still believe series can still realize its potential. The game isn’t that far off from greatness. Underneath the mediocrity, the formula and foundation are there. With the proper care and attention to detail I think I’ve found three areas that would make the C:LoS series more than just an imposter.

1) Give it the AAA treatment. Taking the greatest hits of proven gameplay elements has worked for Castlevania in the past. Recently, it has worked even worked exceeding well for new games like Darksiders. You can’t half ass these features though. You have to fully and seamlessly integrate them into the gameplay. World traversal, the QTE’s, and fighting system all have plenty of room for improvement and plenty of examples of flawless execution. Bring them together the right way and it will take C:LoS beyond its sources.

I agree with this guy

2) Add a unique gameplay feature. You can’t just borrow from other games and expect to stand out on your own. The action should take care of itself and doesn’t need a radical departure. What this genre needs is to instill the player with a desire to explore. As it is now, C:LoS is a bit too restricted by it’s chapter setup even if it encourages you to revisit levels when you have powered up. The answer lies somewhere between a questing system in MMOs and the scanning and discovery elements of the Metroid Prime series. Nail that and make it fun and you will give Castlevania fans their biggest high since the inverted castle.

3) Ground it with the core Castlevania element: a castle controlled by a dark force. I’m ok with rewriting or starting anew with the Castlevania story and definition of the foundation of its game world. In fact, I think that was the right move and only way to sell fans on a new 3d Castlevania. This has to be done within reason since in the end it has the Castlevania name on it. As I’ve said, the unique settings for each level are one of the game’s strengths and I still hold out hope for a castle being heavily involved in the later part of the game. Regardless, the castle should be front and center from a story standpoint and I believe there are creative ways to tell that story that would make the outdoor levels feel more grounded in the Castlevania traditions. For example, these lands could be accessed through gateways within the castle or make the castle huge beyond scale so that they are actually inside of it somehow. The castle needs to be the bookend of the story, and it doesn’t have to make logical sense when it is all being controlled by evil forces.

I don’t hate C:LoS by any means. The fan boy in me has just been disappointed. This game is average at its worst and just plain good at its best. Nothing is broken to the point where the game is unplayable. It just lacks that extra spark of thrill, fun factor, and immersion owned by the standard bearers of the genre. You take out the Castlevania title and tell me it’s a new IP from MercurySteam and I’d tell you this isn’t a bad first effort. A series as historical as Castlevania, however, deserves more than a good try.

1 Comment → It Doesn’t Matter: I Should Not Have to Try to Love Castlevania: Lords of Shadow