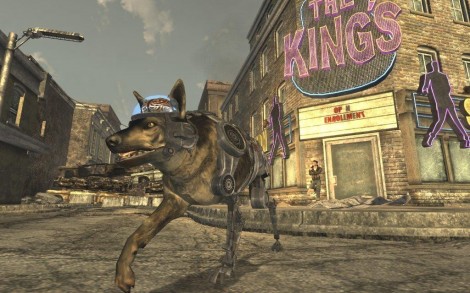 Not relevant to the article, but who cares...that's an awesome robot dog.

It was announced on Monday that Fallout: New Vegas would be seeing some DLC relatively soon, as in “this holiday” soon. Fans jumped and shouted with glee until the fateful words “exclusive” and “Xbox 360” were joined once more to give PS3 and PC owner’s the usual kick to the groin. No other details were given about the content of the DLC, but that didn’t stop millions of whiny gamers from shouting from the rooftops “This injustice will not stand!”

As a PC gamer, I’m not surprised, nor am I worried. “Exclusive” in gaming lingo means “everyone else wait 6 months” so I’ll patiently do so. I bought it for the PC and seeing that the graphics will be much better and there’s a gigantic modding community out there ready to rock, I don’t feel too cheated. It does, however suck for those that own a PS3. Still, it’s up to Sony to secure these kind of exclusivity deals, so if you want to get mad at anyone get mad at them.

In the meantime, you can remain occupied with the plain old version that doesn’t have early access to DLC, the version that will probably take you all of 6 months to explore seeing as the strategy guide is longer than War and Peace.