Until next month when the Kinect is released for the Xbox 360, something that goes by many different names has been our connection to the video games we love. Controller, joystick, control pad, joy pad. What we call them might differ, but they all play the same role. Without them we would be unable to find the princess in another castle, or defeat the vile red falcon. As much as the games of our past mean so much to us, so should the way we controlled our favorite characters.

If you’ve played any type of video game, you know that control pads have changed over the years. Bringing about innovations that are copied and sometimes improved upon by a competing company is just par for the course in this world. We have to thank the industry for this level of competition because without it, we might be stuck playing on the same old NES D-pad with an analog stick attached to it somehow. 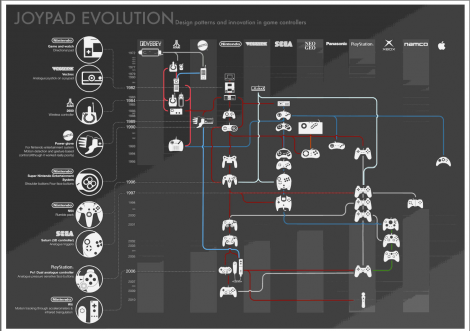 Thanks to Steve Cable over at cxpartners.co.uk, we now have this infographic timeline detailing the history of video game controllers. You can also buy this as a poster from imagekind.com. This is something that would look awesome in any gamer’s man cave.

3 Comments → The History of Control Pads in One Infographic