Remember when collector’s editions used to be the exception? Now, it seems like every game under the sun has a special version just because they can. I’ve taken a look at most the collector’s-ish edition games coming out this fall and holiday season. You may have different tastes in collectibles and games, but here’s what I’ll be picking up or laughing at. 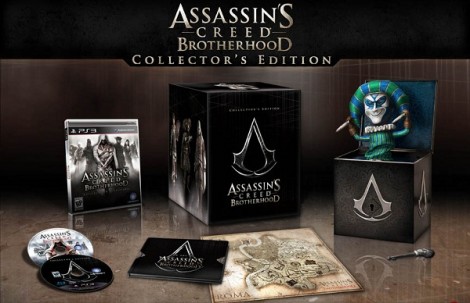 I didn't know I wanted a jack-in-the-box

They spoke to me

Halo: Reach Limited Edition – The last game of the Halo series for Bungie so you know they were going to go all out with the final package. Once again they release both a Limited and Legendary edition (see below) and I have to go with the Limited Edition. There are some in game armor bonuses, but the personal journal of Dr. Halsey and artifact bag sealed the deal for me. I’m a sucker for anything close to concept art and this is a great way to package notes about the game.

Fallout: New Vegas Collector’s Edition – Early candidate for my game of the year, hopefully the game holds up. This package comes with a little bit of everything and the pieces add up to something irresistible. We’ve got New Vegas poker chips, a deck of cards with artwork, a “platinum” poker chip, a graphic novel, and a “Making of” DVD. For as much as is in here the overall size of the package is pretty manageable and the individual items won’t take over your living room. More is better in New Vegas.

Assassin’s Creed Brotherhood Collector’s Edition – I’ve been late picking up the previous entries of what has become one of my favorite series of the current generation of consoles. Part of me wants to pick this CE up just to make up for my past mistakes. This has a solid package of expected bonuses like the soundtrack, “Making of” video, and an art book. What pushes this one over the top (in uniqueness and in price) is Jack-in-the-Box collectible. I even have to go with the GameStop version as The Harlequin character is pretty damn creepy looking. And I love creepy.

More expensive than your CE

Rock Band 3 Fender Squier Guitar – Not a CE by definition, but you better believe that this pro guitar is going to be the highlight of my holiday purchases. Using a real instrument to play a video game is anything but standard.

World of Warcraft: Cataclysm Collector’s Edition – I think I’ve said my peace about this CE. Bring on the art book, soundtrack, dvd, and in-game pet. I’m ready to sell my soul to Blizzard all over again.

Everything is awesome except your game

These are decent CE packages for games that I have no interest in.

Tron: Evolution Collector’s Edition – A game that I hope proves me wrong, but everything about it looks generic. But holy hell, that’s a light cycle, who doesn’t want a light cycle?! I don’t care how expensive it is, that’s exactly what your fans want.

Gran Turismo 5 Collector’s Edition – Everything seems in line with what a car lover and fan of Gran Turismo would want – model car, custom keychain, 300 page car guide, and nice packaging with authenticity certification. Unfortunately, I’d fall asleep before this game could load up.

Call of Duty: Black Ops Hardened Edition and Prestige Edition – My take on CoD recently is that Black Ops will be the video game equivalent of Bad Boys 2. That excites a few people that like a little less substance behind their explosions. This will sell a billion copies so what I say has no weight, I just wanted to justify my classification of these CE packages. I am a fan of the steelbook case in both versions, I wish all games had the steelbook option. The main collectible included in both is a medal in a display case, which I find ironic considering the name other modern war shooter that is coming out this season. The Prestige Edition includes a RC vehicle with custom controller. Sure they can tie it into the game, but at some point it seems like they are just throwing in random items to hit a price point.

Whatever, just give it to me

This is about as bare bones as CE’s get, you are lucky I like your game.

Castlevania: Lords of Shadow Limited Edition – It’s a Castlevania game, and I’m me so I’m getting the game without a doubt. The art book is welcomed addition to my Castlevania collection. Gotta say I’d like more with this significant of a Castlevania release, but the price is right for what they give you.

Need for Speed: Hot Pursuit Limited Edition – I have a developer crush on Criterion and a huge fan of the Burnout series. So toss this one into the “I want to support the developer and their new game” bucket, and I’ll take whatever the give me. This LE unlocks a few cars early, so it’s pretty much LE in label only if you pick it up soon after it comes out.

All that work for nothing, I’m sure someone thinks these games and their accessories are special (in their own weird way).

Halo: Reach Legendary Edition – This was really tempting just for the reason that it was the final game, and it’s a series I respect. I like to honor games like that buy going all out when they go away. Plus, this comes with a Todd McFarlane crafted statue and figures of Noble Team. Normally, I’d bite on this but in Legendary style the total package was just too expensive. I think if the figures would have been removable from the statue itself, that could have swayed me. But I didn’t really want a big stone that I could manipulate for that price. 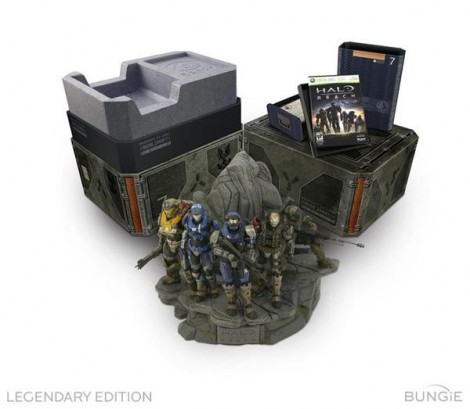 Civilization V Special Edition – I love Civilization even if I’m a late convert to the series. However, there’s nothing about the art style or presentation of the game that draws me in. It’s all gameplay, so this doesn’t fit well with why I would want to connect items related to the game. Decently priced for having the behind-the-scenes stuff, art book, and figurines. It’s just not for me.

Disney’s Epic Mickey Collector’s Edition – Seriously endearing concept for a game, and it looks fun as hell with a ton of promise. But it’s on the Wii, and I don’t even play Nintendo games on that anymore. Best of luck to you. I’d steal the vinyl figure if I could. 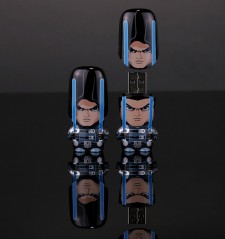 That's cool, but who are you again?

Star Wars: The Force Unleashed II Collector’s Edition – Sure, it’s Star Wars, but that shouldn’t mean the game gets a CE by default. I liked the first game, but it’s definitely a rental level game that you are one-and-done with. The game itself should be priced cheaper so I can’t justify spending more money than usual on a CE. Digital art books aren’t as good as physical art books. The one great feature of this package is the Mimobot 2 GB Flash drive. Too bad it’s the main character from the game and not someone more memorable from the rest of the universe.

Dead Rising 2 Collector’s Edition – I’m sure zombie fans can dig it, but all these zombie protection accessories just aren’t interesting. The world of Dead Rising isn’t the main draw, it’s just zombies that we like, not YOUR zombies. Just a CE that wasn’t necessary.

Fable III Collector’s Edition – I may very well end up picking this game up at a later date. But as with the other Fable games, the more they promoted it, the less interested I got in the game. This is another series were I haven’t really fallen in love with the style, world, or presentation so collector’s accessories to that don’t really interest me. There is a lot of in-game content included in this package as well as playing cards and a distinctive coin. I’m not seeing the additional value here at all.

Medal of Honor Limited Edition – Surprisingly, there’s no ridiculous CE for this me-too franchise. Just EA’s LE that gives you early access to specific unlockable weapons, and the label on the package. Same price as the standard edition (if that ever comes out). Can’t get mad about that. Save that for the game.