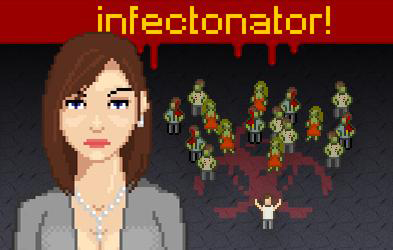 One should always stay busy at work, but sometimes droughts of activity validate a little bit of fun and these tiny tidbits should satiate the gamer inside until the work days done.

With the recent release of Dead Rising 2, we’ve all had the opportunity to be placed right in the middle of a massive zombie infestation and given free reign to decapitate and dismember thousands of stubborn corpses. Now its the zombies turn to star as the protagonists of an undead invasion and they do so on a global scale in Toge Production’s Infectonator: World Domination.

I know the game has been out since February, but it seemed relevant to what with the arrival of the aforementioned Capcom title and Halloween just around the corner. Plus, zombie slaying guilt may have set in with some of you and nothing dampens that emotion like a bit of retribution. 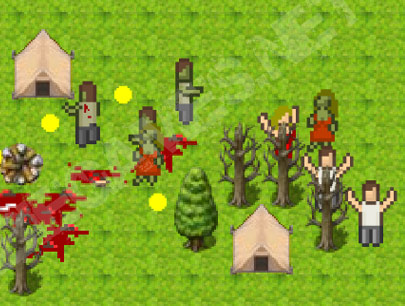 Tents are not safe places to hide from zombies

I can best describe the game as a zombie takeover simulator with slight RPG elements and enough length to burn an hour or so. Your mission is simple enough; click on the screen to release a virus and watch the chaos unfold. The throw back graphics fit well with the game play and fill a nostalgic void left empty in this era’s ultra realism.

It’s not exactly a tough game, but challenges such as police officers and soldiers make the starting point of your infecting click very important. As you progress, you earn money to put towards the strength of your virus as well as for the purchase special zombie types that tip the scales in your direction.
The game is fun and while zombies may be saturating the market, the concept is original enough to make even those with the heaviest zombie fatigue take a shot.
Even if you’re not a fan of browser game, I:WD is worth a look. Besides, developers have to get started somewhere so why not support the little guys before they ascend to the ranks of Blizzard and THQ.