What started as a curious investigation in a small town complete with its own deadly amusement park eventually led next to a diabolical encounter with a vampire. Now in Professor Layton and the Unwound Future things take a strange turn when the professor and his apprentice Luke find themselves in what appears to be London’s dystopian future  after a time-travel demonstration goes awry.

After two and a half weeks and almost twenty-two hours of game play I finally completed this adventure and I have to say, I was very impressed. At more than seven hours longer than the previous games this one is mind-blowingly deep. 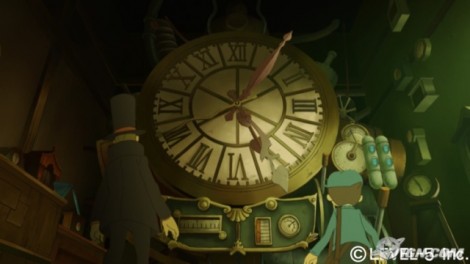 Reading between the lines:

One of the first things I really noticed about this game is the story line. It’s much deeper, darker, and intense than either of the first two stories. There are more twists and turns when you least expect them, as well as some overwhelming moments that are incredibly emotional for a game like this. In fact there are even some points in the story where you stop and think, “What is this rated again? E 10+?? Really!?… Well, I guess they don’t show anything…but still!” We get a lot more back-story on the good professor which is entirely welcome. He’s a pretty cool guy, and now we know a little more about why. And to top that off there’s even a love interest that’s not a preteen girl, and I hear she has a sister!

A Puzzle is worth a thousand words: 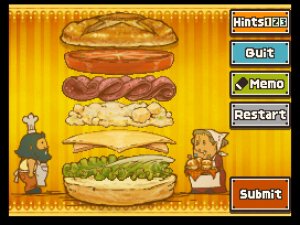 Now it wouldn’t be a Professor Layton game without a ton of mind-bending puzzles, and this game is no different. Boasting over 165 this time the types of puzzles are much more varied and more difficult than ever before. They increase in difficulty throughout the game and after the first fifty or so they become pretty hard. One of the added mechanics in this third installment is the addition of secret areas that react differently when tapped, leading the player to inspect each and every location in great detail. Along with the puzzles in the game are three entirely new sub-games that you collect pieces of throughout. While in the last game you had to collect camera pieces or pick out the differences between two photos, the sub-games in this one take a lot more cunning to solve and are MUCH more fun to play!

The only thing I would change about this game is actually its length. There are a few parts that suffer from “Return of the King Syndrome” where it feels like it should have ended three times before it really does and has some strange timing for puzzles that stop the action in its tracks. I did find myself toward the end using a lot of hint coins just because I had gone through so many puzzles already and was ready to get to the end of the story. This was not because the story was so long, but because I wanted to know what was going to happen next without taking the action to a halt. (Only Professor Layton would stop to solve a puzzle while in the middle of almost dying several times…)

This game is a natural evolution from the previous two games, and will please older and younger fans alike. I wouldn’t necessarily recommend jumping straight into this one if you haven’t at least dabbled in the earlier installments, if only because you won’t get the jokes poking fun at the first two. This one is full of fan-service, but not for its own sake. They work it in with the storyline supremely well and put together an experience that is flat out fun as hell! If you’ve played any of the Professor Layton games, pick this one up ASAP and you won’t be disappointed. If you haven’t played any of them, go out and get Professor Layton and the Curious Village and prepare yourself for an obsession that will have you seeing puzzles everywhere!

Now keep solving and carry on! 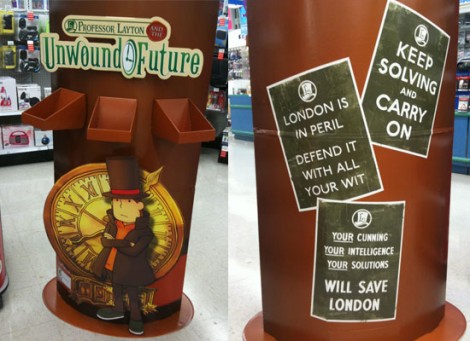 I almost stole one of these from Fry's last week...