Before you begin reading this review, I want to make something very clear. If you didn’t like the original Dead Rising or the recent prequel Dead Rising: Case Zero, you are not going to like this game. Simple as that. New additions to the Dead Rising formula make the sequel feel relatively fresh, but not a lot has changed. Does that mean it’s a bad game? Absolutely not. 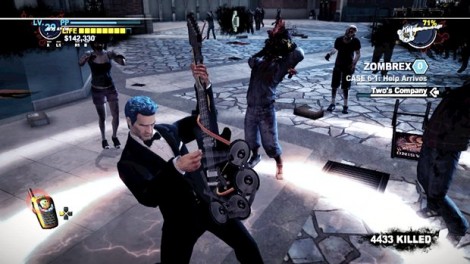 Dead Rising 2 takes place a few years after the incidents in the previous game. Zombies have spread throughout the country and their management is just as important as keeping stray dogs off people’s lawns. You play as Chuck Greene, a former motocross champion and current contestant on a reality game show involving zombie themed activities. Things get dicey after a show and Chuck not only has to survive a massive zombie uprising, but prove his innocence as well.  Add in a daughter with the need for medication to stave off a zombie infection and you have a hero with quite a bit on his plate.

Not another B Movie

The story is SyFy channel fare  and you’ll find yourself clicking through most of it until things get a bit juicier near then end. However, if you bought this game for the story, you’re an  idiot. Dead Rising 2 is all about over the top violence and it delivers…with a vengeance. 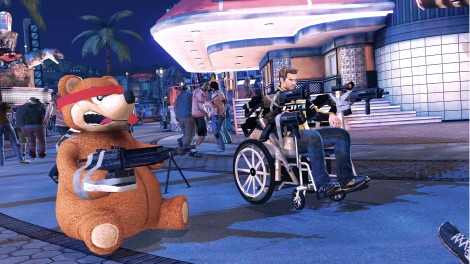 The level of weapon creativity isn't deterred by political correctness

Zombies run rampant throughout Fortune City and the many casinos and stores give you a ton of opportunity to slay the undead in a variety of clever and inventive ways. The photography from the first game is gone (thank god), replaced with a weapon modification system that takes zombie slaying to an all new level. A variety of items can be combined to make all manner of weapons, from electric rakes to my favorite, a pair of MMA gloves covered in nails.  A few creations can’t be carried in the inventory, which is pretty frustrating but nothing that can’t be overlooked. The combo weapons net you experience points, which gives quite a lot of incentive to explore all of your options.

A little old and a little new?

In addition to weapon modification fueled zombie kills, there are missions to complete, survivors to save and psychopaths to kill that all help level up your character. The main missions drive the story and like in the first game, failure ends the progression of the story. Survivors are much more common this time around and aren’t quite as stupid as their predecessors although a few scenarios can be very annoying,especially one involving a wheelchair. The psychopaths are back and seem to be re-skins from of the Looney Tunes from the first game. Some can be fun to fight but most will infuriate you with cheap moves. Just be prepared to restart the game many many times. 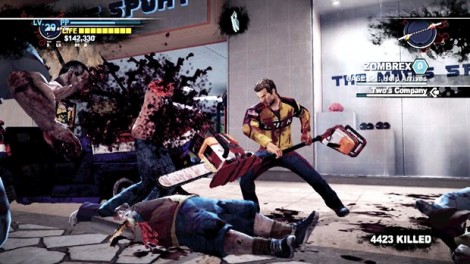 The game looks pretty good, especially when you see the amount of undead onscreen. Textures look like complete crap up close though, which makes the already hard to stomach cut-scenes even worse. The control scheme is solid despite a few camera and response issues, which can be overlooked. Those that get really excited about loading times will be pretty fulfilled upon completion of this game but normal people may get a bit irate.  The flaws never draw attention away from a game that while not GOTY material, is a solid title for those tired of titles that take themselves too seriously. The Terror is Reality multiplayer mode is a good deviation from the main game, but its mini game style of play won’t keep you playing for too long. All in all Dead Rising 2 is an incredibly fun and surprisingly lengthy experience.  Multiple endings and a plethora of achievements will have you completing multiple playthroughs and the added co-op option will help to keep this game dust free for quite a bit of time.  The best thing is, when the zombie apocalypse does come, you’ll have more then enough good ways to protect yourself.