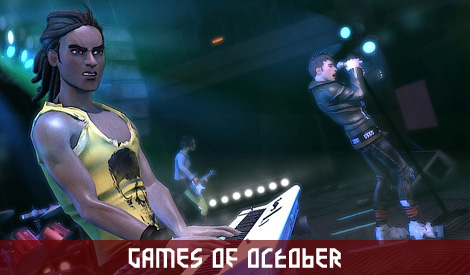 Here we go, time to unleash the games. The next two months have an intimidating amount of quality titles to play and we hardly know where to start. Music games have a big and diverse month inbetween a slew of action/adventure titles. We’ve asked The Cursed to break down what they will be opening their wallet for to help you sort through the flood.

What we will be playing.

JDevL
I’m not going to lie I’m picking up quite a lot of games this month, and I don’t know how I’m going to play them. If I had to focus I’d say most of my time is going to be spent on Castlevania: Lords of Shadow, Fallout: New Vegas, and Rock Band 3. Castlevania may not be perfect in the end, but it looks like it is going to satisfy Castlevania fans and that’s what I am. Big story, lots to explore, great combat, and Patrick Stewart is enough for me to spring for the Collector’s Edition. Fallout: New Vegas will take over my life for the near future. It took me a while to get into Fallout 3, but I was hooked hard once I gave it a fair chance and I’m excited to be in from the start in New Vegas. The new setting and the fact that New Vegas has electricity and isn’t a complete wasteland looks to be enough reason for me to explore for 60-100 hours. Last, but most likely my game of the year is Rock Band 3. I will be picking up a the Fender Squier guitar to try and play guitar for real, or as much as a video game will let you. I can’t wait to have my fingers bleed and callous for a less embarassing video game based reason. The song list looks great, the keyboard instrument should be a blast, and a few of my fellow singers will be excited to try out harmonies on their favorite songs. 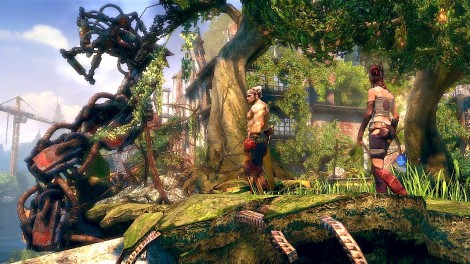 A much more colorful apocalypse

Colefacekilla
October is full enough for me to consider quitting my job so it doesn’t get in the way of playing video games. The first week of October is ridiculous and I’m interested in 4 games: Castlevania, Def Jam Rapstar, NBA Jam (although I’ll probably just wait for the xbox version) and Enslaved. It’s going to be a hard month on the wallet for me and I’ll probably only be getting Costume Quest at the end of the month. I downloaded the demo for Castlevania but have yet to play it. All I know is it’s Castlevania. I hope I’m not disappointed. We’ve talked about reasons why Def Jam Rapstar is on our radar but to be honest, I’d be perfectly happy playing that game by myself. Enslaved is intriguing. I love things post apocalyptic and this is a different take on it all together. Maybe even Christina would like this game because it’s not just gray and brown. This one has green! What more can be said about NBA Jam. It’s going to be awesome no matter the console. It’s one of my favorite retro games that I have never gone back and played. I might be looking forward to this one the most.

Wizardtrain187
Fallout: New Vegas is already preordered and I am thinking its going to be my personal GOTY. For people that are only buying a few games this season, FNV really looks to give the most bang for the buck and all previews point to improvement in terms of gameplay and graphics. Most the other games seem like rentals, especially Splatterhouse since I can’t imagine it validates a purchase. Medal of Honor looks ok, but I may wait until Call of Duty: Black Ops comes out in terms of my multiplayer shooter fare. Still, I really enjoy realistic war games and will probably pick it up just to see if it is relatively true to the actual conflict.

What happens in New Vegas?

Coopopolopolis
If I pick up anything on this list it’ll probably be Rock Band 3. I’m pretty intrigued by the Fender Squier guitar with pro mode. And if I purchase the game with the Fender Squire I’m sure that’ll eat up my gaming budget for the rest of the year. I think Harmonix took the game to about the only level they could by making you learn how to play the actual song on the guitar which i think is cool. I applaud them for not pulling an Activision.

Pixelmixer
I’ll definitely try to pick up either NBA Jam this month and am considering Sonic 4. It seems to be the dawn of great revisited classics and I am optimistic that they will be amazing. As much as I like Sonic, that one has a better chance of a purchase since it will be available on xbox immediately. I might end up waiting on NBA Jam until it is released for Xbox later this year before attempting to dust off the old Wii.

Robeque
Enslaved: Odyssey to the West definitely has my interest piqued. I always wanted to play Heavenly Sword if I had PS3, so this will give me a chance to play something from the same team on me old 360. It looks to me like it will be a fun and interesting action/adventure game. I’m not sure that I’ll pick it up right away, though…. my queue is way too long at the moment. Comic Jumper of course also looks like a fun one. I have some points on my account that just might find their way into purchasing that. Like Dustin, I think I’ll wait to see about a 360 release for NBA Jam before picking that up.

EndlessBen
The one definite for me is Fable III. I loved the first two and the new one looks promising. I’ll probably pick up NBA Jam and Sonic sometime for some old school / modern fun. I didn’t know much about Comic Jumper until recently but that looks like a pretty fun time that I will probably have to check out. And the Star Wars geek in me might take the plunge on the Force Unleashed II if I find a decent deal on it.

What are you picking up this October?

2 Comments → The Games of October Take Your Money