Rushing headlong into any situation can have dire consequences, no matter what occupation or lifestyle one has. Observation is key and modesty can mean the difference between success and getting caught with your pants down, pants that you’ve pooped in because your sphincter loses control when you die. These are the lessons I learned from Fallout 3.

The Lessons of Fallout 3 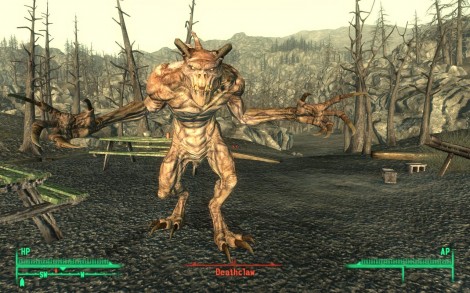 Those new karate moves probably won't be enough in this scenario

A Level up doesn’t constitute a quantum leap ahead

I learned something today. Improvement is essential to the survival of any species, but humanity suffers from a side effect of this increased ability called overconfidence. Setting a personal record in a foot race or increasing your squat max is great, but doesn’t mean you’re ready to compete with mutant bears or soldiers in robotic armor. Judge your skills honestly and appropriately for all situations and you’ll do just fine. Thanks, Fallout 3.

Words are just as strong as Bullets

I learned something today. As easy as it is to use physical aggression to accomplish goals, sometimes intelligent communication can prove more useful. What appears to be a straight forward task could hide a door to increased fulfillment that a fist would surely close. Remember that hugs are useful in defusing most any situation, even those involving apocalyptic settings. Thanks, Fallout 3.

But sometimes miniature nuclear weapons are the only resolution

There’s a lot of grey between good and evil

I learned something today. Every decision one makes has a multitude of consequences, but perceived notions of good and evil aren’t always apparent in the beginning. The road to hell is paved with good intentions but the road to heaven may feature some evil asphalt as well. Donating money to a homeless man seems nice but you never know what faction he’s involved with. Use your gut and follow your heart because in the end gray is often the way. Thanks, Fallout 3.

I learned something today. Everyday routines can grow tiresome and boring, but a rut is avoidable with increased perception. Putting on blinders because a situation or locale is familiar may prevent you from discovering something that wasn’t there before, something that may be good but also quite dangerous. Confront every situation, old and new as if the possibility of danger lies around every corner. People never expect giant radiated animals until its too late. Thanks, Fallout 3.

Take a look around, make calculated choices and the occasional educated guess in route to a successful journey through life. Thinking too highly of yourself and miss judging actions could result in embarrassment, infamy or missing limbs.