After a decade, we have arrived at the end for Bungie developed Halo games. The series and its creators are both at a crossroads. Before we move on completely, we journey to Reach to see how the events of the rest of the series almost never happened. Will Halo: Reach rewrite the standards for prequels or is it just a story that was better left unplayed? 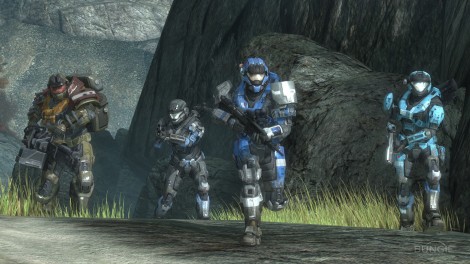 Team Noble coming at you

The story of Halo and I have a mixed past. I gave up on the stories during the main campaign, but connected with the events of Halo: ODST. The premise of Reach did not bode well for my interests. The glassing of the planet is well told throughout the Halo series, so with a predictable ending, I wasn’t sure if I’d be able to get pulled in. Thankfully, the narrative builds on the same hooks that I connected with in ODST, and ends up being the most polished story and gameplay in the entire series.

You play as Noble 6, the newest member of the Spartan squad, Noble Team. Each member of Noble Team has their own individual personality and class-like skills. Through a majority of the campaign you are paired up another member of the squad, before meeting up with the group, and go your separate ways with a different member. Though there are no stand out voice acting performances or over-the-top characters, you still feel a part of this small team that is trying to have an impact in the larger war that is overtaking the planet. Nothing is overdone or perfect about the characters, but you do character about them a lot more than the nameless marines that accompany you throughout the core Halo campaigns.

Apart from your team, the mission structure returns to normal Halo form in that there is no hub world connecting missions like there was in ODST. Each mission’s setting and goal are unique, and Bungie did a fantastic job of mixing up battle scenarios throughout 80% of the game. Just when battles start becoming predictable, vehicles, including a new starfighting scenario, keep the pacing balanced. Things only start to get repetitive near the end of the campaign so it could have been a bit shorter to be a tighter story overall, but if you like Halo gameplay, you will have nothing to complain about either. Playing through the end (and through the credits) made for an completely satisfying campaign experience. 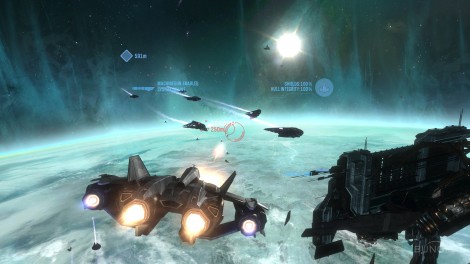 Speaking of Halo gameplay, everything you know and love about classic Halo action is here and it’s polished more than ever. Bungie can create interesting battles against the Covenant in their sleep by this point, but they really put some care into the pacing of Halo: Reach. Playing on heroic requires just the right amount of weapons strategy and battlefield awareness that veterans will struggle on the solo campaign, but not to the point of frustration or boredom.

About halfway through the game, I encountered a particularly difficult fight that took me much longer than it should have. However, at the end my adoration for Halo was restored when I had an epiphany and my hit-and-run strategy ended up working out much better than my previous sniping and turret strategy. That’s where Halo shines. The same battles can play out entirely different based on the strategy you choose. Sure, after a while they can seem like puzzles more than gunfights, but that is a testament to the great game engine that Bungie has built.

Of course the campaign is only a small piece of a Halo package. Every day Bungie issues new challenges for you to measure your skill across the campaign, multiplayer, and firefight game modes. Classic multiplayer is what you’d expect, they aren’t going to break the formula that works. They’ve just added more subtle refinements and polish on top of an already great experience. Firefight is new to non-ODST players, and has a team of players as Spartans fending off waves of AI-controlled Covenenent forces. Unlike ODST, Halo: Reach supports matchmaking for Firefight so it is easy to jump in with a team on day one.

I have to say, as a gamer with only passing interest in online Halo multiplayer, that matchmaking has come a long way since the early days of Halo 3 and Halo 2. There are plenty of filters to set up so that you can try and find the right kinds of strangers to play with. When the inevitable offensive player takes over the microphone, it just takes a few clicks to mute them. The game even has auto-mute built in for those gamers that have been muted more often than not. It still isn’t perfect, but I’ve had a lot more annoyance free gaming sessions with Reach than I ever had with the rest of the online games in the series.

Where Halo: Reach really gets scary is in it’s reputation system for you Halo: Reach career. Every battle, campaign or multiplayer, offers experience points to rank up your character. Each rank unlocks customization options in the armory that you spend credits (earned in single or multiplayer) on new armor pieces for your Spartan. In addition to normal Xbox Live Achievements, Halo: Reach incorporates both commendations and daily and weekly challenges. Commendations keep track of specific game actions like headshots and level up over the time earning you more credits. 4 Daily challenges refresh every 24 hours to give you even more motivation to try out new game modes to hit specific goals for credits, along with 1 weekly challenge per week. Those are a lot of carrots to dangle in front of players of an already addictive experience. This doesn’t even include the improvements to Forge and Theater for playing back and sharing your greatest Halo moments. Let alone, Halo Waypoint that keeps track of your entire Halo career. You get the feeling that Bungie doesn’t want you to leave Reach until their next game comes out. 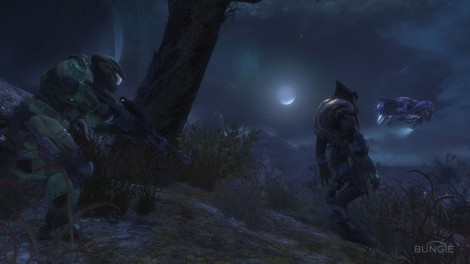 Spartans are deadly at nightfall

This is the end

Skeptics of the Halo series, including myself, doubted the necessity of a 5th game. Especially when the recent games had only shown marked improvements over its predecessors. Bungie could have just gone through the motions on this one and moved on to new horizons away from Microsoft. However, you can feel the care and detail that went into Halo: Reach. Bungie leaves its mark on console shooters with Halo: Reach just as strongly as it did with Halo burst onto the scene 9 years ago. Only now, they have the console and finely tuned story telling chops to craft a complete and polished game that stands proudly as the best Halo experience of all.