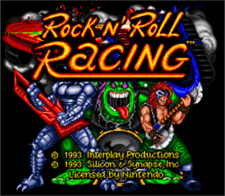 His guitar IS an axe

Adrenaline, speed, noise, crazy outfits, and loudspeakers. Two things contain all of these elements: racing, and good old fashioned Rock and Roll. Throw in a little intergalactic rivalry, dangerous alien roadway conditions and you end up with Rock n’ Roll Racing for the Super Nintendo.

I’ll start off by saying, if you haven’t played this game, you are greatly missing out. This was a time when racing games hadn’t started trying to be realistic yet, which meant they could just be flat out crazy. This entire game takes place as you travel from planet to planet racing against that planet’s villain on elevated highways, generally situated above something unpleasant like acid or hot lava. You start out with a pick of basic vehicles, and as you race and gain money you can beef up your current vehicle by adding nitros, weaponry, etc, and eventually buy bigger and better rides (I always lusted after the expensive hovercraft).

An interesting thing about this game is that you can blow up or fly off the track as many times as you want, the only thing you lose is the time it takes for you to respawn and continue racing. Bonuses are gained by destroying or lapping other racers but it all comes down to the points you gain by placing well in the races. Get enough of those points and you proceed to the next planet to take on their dominant racer. Through each race, your are encouraged by the hilarious commentary of Loudmouth Larry. With each character having a name, Larry actually calls out what is going on with such profound statements as “Rip is about to blow”, “Shred should avoid mines!”, “Holy Toledo!”, and “Let the carnage begin!”.

Now we can’t talk about Rock n’ Roll Racing without talking about its soundtrack. When Rock n’ Roll is in the name you better be able to back it up and this game does so with flying colors. Cheesy as SNES music may sound to us now, the fact that this game included stylized versions of George Thorogood’s Bad to the Bone, Black Sabbath’s Paranoid, and Deep Purple’s Highway Star among others made the soundtrack pretty awesome for its time. 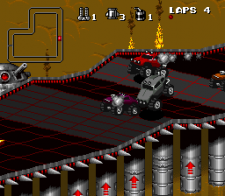 In terms of graphics, the closest comparison I can think of is Battletoads in isometric view. Bright, colorful, and violent, which sounds just about right to me.

This gem of a game won Best Driving Game of 1993 by Electronic Gaming Monthly and was created by a hole in the wall company named Silicon & Synapse. Never heard of them? I wouldn’t expect you to, they haven’t gone by that name in quite some time. These days they go by Blizzard Entertainment, creators of little franchises like Diablo, StarCraft, and Warcraft.

So seriously, go play this game, because you may never get to get to drive on an alien planet and blow your opponents apart with rockets while blasting Black Sabbath again.