The streets are awash with blood and brain matter, chaos ringing from every corner. Whats left of a formal government has retreated into a mountainous stronghold and the only shelter in town was overrun days ago. The undead have come a knocking, but you’re not worried. You knew this was coming and you prepared by paying extra special attention to Better Homes and Gardens.

In Plants vs Zombies, you’re tasked with defending your home from an onslaught of animated cadavers in a tower defense style of play. However, the tools at your disposal are not what one would expect when combating the undead. Instead of guns and grenades you’re given a slew of garden variety plants with different defensive or offensive abilities such as pea pods that shoot damaging projectiles and walnuts that halt the progress of attacking zombies. The variety of plants is huge and can be mixed and matched in between rounds to create a suitable strategy against the attacking horde. 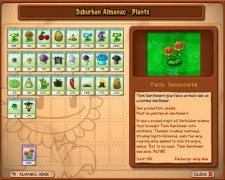 Variety isn’t only reserved to those chlorophyll fueled crusaders as zombies also have a multitude of flavors to offer. While the first few levels feature your tried and true shambling corpses, later battles feature armored zombies, aquatic zombies and even zombies driving zambonis. It takes a bit of trial and error to figure out how to defeat each unique enemy, but the game is good about easing you into new opposition. A few examples are more frustrating than fun (zombies attached to bungee cords can remove whole plants from the battlefield) but the game gives you a sneak peak at what zombies will be attacking, thus allowing you to pick the proper plants to counter them.

In addition to the zombies, you must also plan accordingly for the environments you’ll be attempting to protect. You’ll fight at night, in a pool and even up on the roof. Each has a particular challenge to overcome and helps with the monotony that comes with some tower defense games.

The main game plays out like most, featuring progressing levels that reward you with money or new plants upon completion. The money can be used to buy supplies from Crazy Dave, your speech impaired neighbor which include plant upgrades and last resort defense mechanisms such as rakes and pool cleaners. The story isn’t too deep, but that’s not what this game is about and most will find the light hearted humor refreshing. 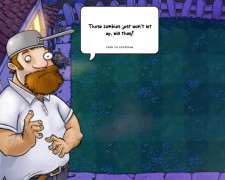 Not as much crazy as...well ok he's crazy

The art style is eye catching despite not featuring the current generation of 3D graphics. The zombies and plants all have distinct looks and animate beautifully. The designers at Popcap games really went the extra mile in making the visuals pop while at the same time keeping the action easy on the eyes.

Fun on the cheap

Where you get the most bang for your buck is the amount of content that gets unlocked after completing levels in the main game. There are puzzle modes and mini games to play, including an interesting take on BeJeweled as well as an infinity mode, which lets you duke it out against an endless stream of the undead. Another interesting addition is a mode called Zen Garden, which has you growing plants in a greenhouse and spending money earned on gardening supplies and new plants. Its not exactly a complicated or exciting extra, but achievement junkies will pull out their hair trying to get all the plants. Its almost like a botanical Pokemon, only with less battling and not as much yelling. 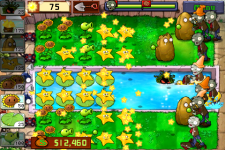 This scenario is really confusing unless you play the game

The game has different features depending on what platform you purchase it on,so be cautious when purchasing. The iPhone doesn’t have the zen garden or puzzle mode and the XBLA version actually has additional Cooperative and competitive modes as well as you few others. Each version’s price matches its features, with the GOTY edition running on Steam at $9.99(originally $19.99), $2.99 on Iphone and the XBLA version going for 1200 Microsoft points(around $15.00). Still, no matter where you’ll be playing it, it always ends up being a great deal.

Plants vs Zombies is an affordable and fun game that can be played for a couple minutes or a couple hours at a time. The indie game scene has already made a presence in the market and Plants vs Zombies further highlights the potential for small studios in the future.

2 Comments → Plants vs Zombies Review: Only My Nuts Can Thwart The Undead