My original affliction of World of Warcraft lasted me 18 months. It is a time that I look back on with fond memories, even though, I still stand my decision to step away from the game. The fact is I’m a much happier gamer when I’m playing a lot of different games rather than being dedicated to one. However, there is always a Troll Hunter in me that wants to go back to exploring Azeroth. Every time an expansion is announced, the itch to go back to the grind returns. I’ve bought both expansions but have yet to play either one since most involved new high level content and I’d want to start over. Then, Cataclysm was announced. The entire world is changed, the starting areas are redone, the world reshaped. Still I resisted. Then, I saw the collector’s edition… 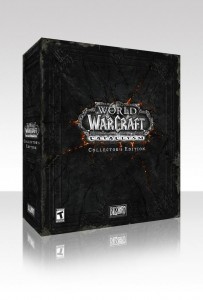 The style of Warcraft is what drew me to Warcraft originally, hooked me in Warcraft III, and swallowed me whole in World of Warcraft. It is also what makes the world so engrossing to explore and timeless enough that the graphics have only recently started to show their age. I have tremendous admiration for the artists at Blizzard and their ability to build this universe from scratch, and now break it a part to show us something new. I have been a collector of game art books for quite a while, and have one of the first art of Warcraft books that came out while they were concepting WoW. I can’t wait to compare the Cataclysm art with the originals while listening to the soundtrack. Epic is an understatement.

For me it’s about getting immersed completely, and I’ve found I get lost a lot easier if I have a few easter eggs to hunt for while I’m playing. It’s been a while since I fully caught up with the world and story of WoW. I’m always a sucker for behind the scenes content with the minds of the creators of games that I respect. I’m really interested not only to see what has happened, changed, and grown, but why these decisions were made. Throw in the great cinematics and trailers to watch on my TV and I’ll pop some popcorn to check out the behind-the-scenes DVD.

My Expansion, My Pet

I’ll admit it. Even though I don’t play the game and haven’t for years. I’m a little bit of an elitist when it comes to the fact that I own the original collector’s edition of the game. I get a kick out of logging into a new server and selecting one of my collector’s edition pets (usually Diablo himself) and having people ask where I got that and how they can get one. Because they can’t. Needless to say, I need to start this new world with a new pet, and it better be hard for others to get down the road. 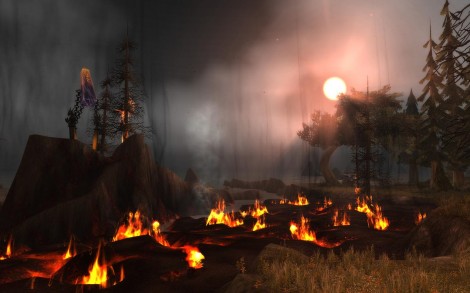 Things have changed. I need to come back.

I Am/Was Going to Get It Anyway

As I said before, I own both the other expansions and I have yet to play them. The draw to Cataclysm is much stronger than the other expansions. The entire world is new, not just a piece of it, plus I have all of the other content that has been added in the years since I’ve played. Day one, I can see new things, and that is why I played Warcraft to start. I will limit myself to 3 month of play (come save me if I don’t stop), and after I gave up that fight, the collector’s edition was the only way to go. May as well buy it before they even announce a release date.

You’re Gonna Get It Anyway
Everyone knew we were going to cave and make the purchase in the end, so here’s a look back at our transparent reasoning for putting up a fight in the first place.

Impulse Buy – Sometimes you don’t put up a fight. You just buy it. Without thinking. It is done. But did you make the right choice?