The week leading up to Labor Day weekend made for a slower news week than usual. Fortunately, PAX had a few surprises to keep us on our toes. 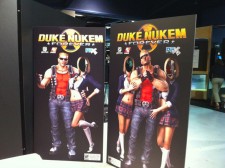 You missed your photo op at PAX

28 headlines distracted us last week, in reverse chronological order here’s the best from that list.

Microsoft Raising Xbox Live Price – G4
Hmm. I didn’t really expect this until the next Xbox, they should probably detail why the price is increasing.

Review: Guilty Party – Destructoid
Bet you never thought of this one as one to watch.

Review: Monster Dash – The Easy Mode
Looks like I’ll be upgrading from Cannabalt.

LA Noire officially delayed to first half of 2011 – Joystiq
Duh. But Rockstar, take your time, you won a new fan with Red Dead. Do what you gotta do.

Duke Nukem Forever coming ‘2011’ on Xbox 360, PS3 & PC, courtesy of Gearbox – Joystiq
It’s rare that an announcement is both exciting and unnecessary.

‘We bought Duke Nukem.’ Franchise rights transferred from 3D Realms to Gearbox – Joystiq
Just when we thought we’d heard the last of Duke, it looks like it’s all just getting started.