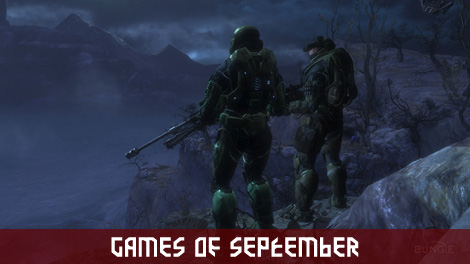 After a summer full of cowboys, catching up on missed games, and tons of downloadable titles, it’s time to prepare your wallet for the onslaught of new games and hardware that is the end of the year. This month sees a couple of great franchises make their return, Sony tries their hand at motion controls, and the downloads keep on coming even before Game Feast can start. Take a look at the headliners this month, and read on below to see what games have our money’s attention to help you find the games worth your time.

Halo: Reach – Halo needs no introduction, and I’m not it’s most die hard fan. However, I do admire Bungie and all they have down with this franchise. The greatly improved graphics, power-ups, and gameplay tweaks are normally enough to get me to buy a sequel in a great franchise. The real draw though, is that this is Bungie’s last (foreseeable) Halo game as they enter into their publishing deal with Activision after this, and Microsoft holds onto the Halo franchise. I just want to see how Bungie says farewell and tells the story of Reach.

Spider-Man: Shattered Dimensions – I can’t say that I have ever played a Spider-Man game. The only time I’ve ever played as Spider-Man was in Tony Hawk Pro Skater 2 and that’s pretty much all I did in that game. Ever since the first videos of SD came out I have wanted to play this game. Actually, I just wanted to play the Noir level because I think it looks so interesting and different for this type of game. I didn’t even realize that it was going to be out this soon. (Colefacekilla) 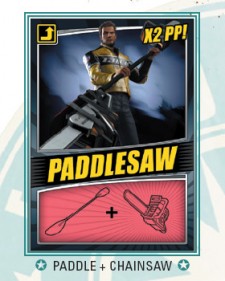 It's all about weapon combos

Dead Rising 2 – Even though most the previews state its similarities to the first game, I am still pretty excited for Dead Rising 2. I’m a huge zombie fan and the undead bashing fun that results from a mall full of zombies is hard to pass up. Not expecting anything in the spectrum of GOTY, just some shallow gore and fun weapon combinations. (Wizardtrain187)

Civilization V – StarCraft 2 may have gotten all the RTS attention recently, but the other flag bearer of this genre returns this month. I got sucked into Civ IV, and previews of Civ V worry me. As they say everything has been streamlined and improved. Firaxis has taken the UI lessons it learned while making Civ Revolution for consoles, and improved the interface for the PC. I’m sensing impulse buy when this comes out, and then sleepless nights of bullying the world into submission.

Quality downloadable titles keep on coming this month. We’ve already talked a bit about Hydrophobia kicking off Game Feast at the end of the month. Plants vs Zombies drags its way to consoles this month on XBLA, promising all the addictive gameplay of it’s PC and mobile versions plus the addition of multiplayer modes. The sudden sequel, DeathSpank: Thongs of Virtue picks up where our loud-mouthed hero left off back in July. More of the same for sure, but that isn’t a bad thing for DeathSpank fans.

Back on the console front, FIFA Soccer 11 returns to the pitch after the World Cup. The developers have revamped the passing mechanic completely, so it may be worth trying out the demo to see if this feels like the right soccer game for you. Batman: The Brave and The Bold has been generating a bit of buzz on the Wii for it’s quality writing, graphics, and steep difficulty. Oh yeah, and Sony has this PlayStation Move thing coming out in the middle of the month. I’ll let Kevin Butler sell you on it.

What are you playing this September?