About a year ago, I bought a software compilation for the Mac that included all the Tales of Monkey Island episodes. Little did I know my wife would discover that game a few weeks later and hog my Macbook for the next couple of months. I decided to ask her a few questions to find out what it is about this game series that she loves so much: 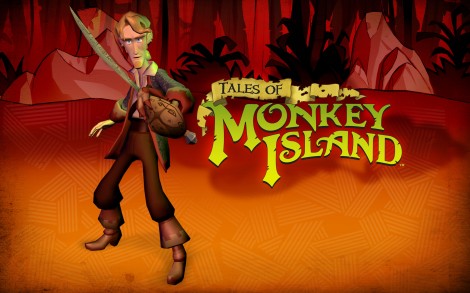 I lost access to my laptop because of this game.

What did you think of Tales of Monkey Island the first time you saw it?
I always like those adventure games with puzzles, like Myst and Riven. I like how you have to collect things and then combine the items to be able to use them to advance the story along.

How long did it take you to like Tales of Monkey Island enough to keep playing it?
The first puzzle I played in The Screaming Narwhal because combining grog with the sword had me cracking up. Plus Guybrush Threepwood’s wife is too hot for him and figuring out why she would want someone who is less intelligent and needy made me want to continue the adventure. Let’s not forget about the monkeys. They look like they’ve licked a few Zuma frogs in their day. 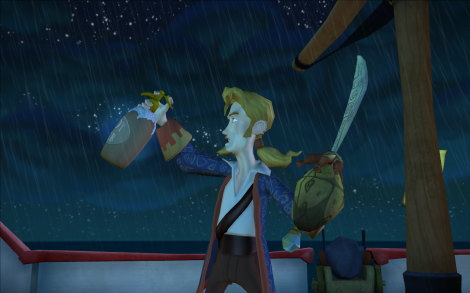 That spritzer magic-ifies your sword.

What makes you go back to Tales of Monkey Island?
It’s hilarious. I found myself relating it to things in real life and laughing out loud. For example, “Darn you socks” with a fist shake, had me cracking up. I saw the word esponja at work one day and it reminded me of “la esponja grande” and I was laughing like an idiot in the bathroom.

When I wasn’t playing the game, I’d be thinking about it and laughing to myself in my own little ‘Monkey Island’ world.

Have you ever played the previous Monkey Island games?
No. I didn’t know there was other games and hadn’t even heard of the series before this one.

You played the game after every episode had already been released. Would you have enjoyed or even come back to Tales of Monkey Island if you had to wait a month for each episode?
Hell yeah! I’m a completionist and I had to find out what the result of each cliffhanger was. However, the breaks in chapters were necessary for me. At the beginning of each chapter it clears your inventory of what you don’t need and gives you a fresh start, dumping out clutter in your brain. 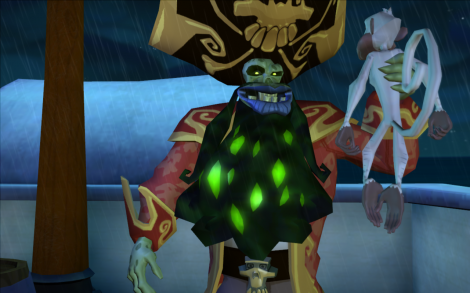 Also, LeChuck is evil and he keeps trying to steal Elaine from Guybrush. Considering Guybrush is such an idiot, a lovable idiot, you’d think that LeChuck would have been a little more successful at it. I guess Elaine must really love Mr. Threepwood.

How would you describe Tales of Monkey Island to a friend in order to get them to play it?
It’s like Pirates of the Caribbean with a far less intelligent Jack Sparrow with some of the same humor. Throw in all the puzzles from Myst and you find yourself either staying up to late or wasting an entire Sunday afternoon.

I haven’t told my wife of the different games Telltale Games makes. I’m sure she would immediately get into the Sam & Max series. Even though she loved this version of Monkey Island, I tried to get her to play the remake for Xbox Live. While she laughed during the demo, she hated the controls and couldn’t get into it. I could lose the laptop, but the Xbox is all mine! At least when she’s not playing Zuma.