In the last few RIS articles, I talked about great games from the past that I’d like to see make a resurgence. Sometimes, however there are games with a lot of potential that made a bad first impression. We’d like to give them a second chance as well.

Flagship studios had very lofty goals for Hellgate:London, the kind of goals that seemed right up the alley of the former Blizzard employees (some of which had overseen the development of Diablo). Up until that point there wasn’t much differentiation in the world of MMORPGs. Hellgate was supposed to turn that style on its head.

The idea was to give players the MMORPG depth alongside the action oriented play style of third person/FPS games. That meant more skill and less standing in one place and clicking the mouse. It also ditched the fantasy setting for a bleak future filled with advanced technology and a savage demonic presence. It had all the makings of a classic, but a slew of bugs, accessibility issues and flat game play made it a huge disappointment.

Grinding is only fun at high school dances

One of the biggest issues of Hellgate was also a marquee aspect of the game. Levels would change every time you played, that way a gamer never saw the same area twice. While it seemed a great idea for prolonging playability, it sabotaged the possibility of the setting and made for a confusing experience. It was true that map layouts were always different, but locales were based on the same boring templates and didn’t deviate much from tunnels, burning streets and temples. Part of the fun of any game is the aspect of discovery, but after a couple hours you’d pretty much discovered most that Hellgate had to offer. Instead of focusing on an ever changing environment, the programmers should have created a memorable setting that encouraged exploration. Fallout 3 successfully featured a real life location and the possibilities of London and the surrounding countryside would have made for a spectacular journey.

The theme of boredom doesn’t stop with level design as the structure of the game’s many quests also lacked any real excitement. While fetch and elimination quests will always be large parts of MMORPGs, Hellgate took it a bit far. In the end, your role as a courier seemed more important than your ability to fight demons. Story missions need a more epic scope and should stand apart from side quests, but that’s a lot easier to do in a single player game.

It’s the end of the world as we know it

How the game could have alleviated this issue is by focusing more on the multiplayer by developing a sense of urgency that tied in with the apocalyptic theme. This could have been accomplished by introducing a game play element that I will refer to as apocalyptic prevention. Essentially, while some quests would advance the story, others would focus on preventing the spread of the demonic creatures by retaking lost ground or defending against invasions. These type of missions would impact the Hellgate community as a whole as opposed to just an individual player, thus promoting cooperative play. For instance, one mission may have a human compound being overrun by zombies. If enough people join in, the compound could be saved, if not then players as a whole lose the services offered by the location as well as eliminating a respawn point for players that have died. Such game play elements would distract from the bland mission design that goes hand in hand with online play. 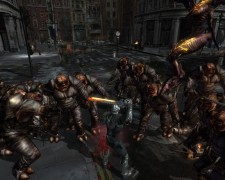 I could really use a friend, damn instances

There was PvP in Hellgate, but it didn’t really fit. Why would humans fighting for the same cause ever fight each other? Even the poorest examples of humanity would have a hard time trying to validate killing someone that could save the planet. What I would do is introduce a faction system reminiscent of World of Warcraft, one that would allow players to be either humanity fighting for survival or a demonic entity struggling to climb through the ranks of hell. This addition may appear to create an issue I’m trying to fix, but I think it would work. Demons don’t really have morals or a code of ethics and the best way for them to get stronger is by fighting the feral creatures that exist in the world. The apocalyptic prevention element I mentioned above would still fit but the end goal would be overtaking the humans as opposed to preventing the apocalypse. This would be accomplished by defeating competing demons from a PvE standpoint as well as fighting humanity through PvP. While I imagine the subways of London would be humanity’s fallback location, the demonic faction would dwell in a hellish dimension and the streets of London would be the in between.

In the end, the problems with this game where based more on an identity crisis than a complete failure from a design perspective. The game was spread too thin between a single and cooperative standpoint and would have benefited from a focus on one or the other. While capable of being single player, the scope of the game seems best suited for a multiplayer experience and the emergence of a fresh Hellgate: London would see greater fan fare by honoring the areas important to such a game.