We all have that moment, our first video game memory. I’m just young enough that the NES was released less than five months before I was born, and I have a brother 10 years older than I am, which meant there was always an NES around, even before I was old enough to play it. So with a few years of watching these games under my belt, when I was old enough to wield that mighty brick of a controller, I dove in head first. I pretty much played whenever I could, whether it was at my own house, a friend’s, or at my grandparents with all of my cousins. I remember playing plenty of Super Mario Bros., Excitebike, and Castlevania II: Simon’s Quest, but one game still sticks out in my mind as something completely different from any game I had played before. The game was Faxanadu, and I’ve probably played it more over the years than almost any other game. 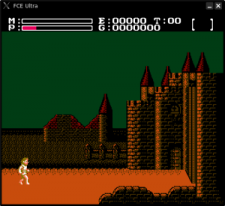 This game had it all. Daggers and wingboots, mantras and monsters awaited me just like the front of the cartridge said they would. You are the nameless hero, come back from a long journey, and what do you find? Your hometown is in ruins and clearly the moral fiber of the the country has broken down, with people smoking in front of shops while monsters roam nearby, kings giving away money willy-nilly to any old hero who may come along promising to save all of civilization, and inhabitants that blink and twitch more than meth addicts. The setting of the game is an interesting one in that all of the towns and paths make up the Worldtree. The hero begins his quest in the roots, and must climb his way to the top to defeat the evil that has fallen from the sky.

I’m not sure what was so immersive about this game to me but I remember losing hours and hours to it without feeling like I was grinding even if I stopped for an hour or two to kill two enemies over and over again to get enough golds (Japanese mistranslation alert!! It was supposed to be “gold” instead of “golds” but extra “s’s” add to the excitement!) to buy a magic spell called Death. I think this game got me hooked on the style of game I’m still in love with today, the type where you’re dropped in a strange place with little direction except for maybe a couple of people to talk to, and your own mind to figure out what you should do next.

I remember one big reason that I played this game so often was that my brother hadn’t beaten it, nor had any of my cousins, and I was determined to be the first. I finally beat it a few years ago and claimed the title of champion. The great thing? It was totally worth it, the time, the effort, all of it. It was an even more fulfilling feeling than beating Simon’s Quest on my own for the first time, and that was pretty great.

As for the enemies in this game, they are hilarious, ranging from a dwarf looking guy named Sir Gawaine to an eskimo who shoots fireballs while flashing you, as if the fireballs weren’t enough on their own. Check out the Beastiary if you don’t believe me.

Sitting at #36 on IGN’s top 100 NES Games Of All Time, Faxanadu is a fun side-scrolling action RPG with an addictive soundtrack, and a great storyline leading you through the game. The comments I’ve seen about this game around the web all say the same thing, “Anyone who’s played this game, has loved it.” I recommend you play it as well if you have the chance! Take the challenge, save the tree, wear your wingboots proudly!