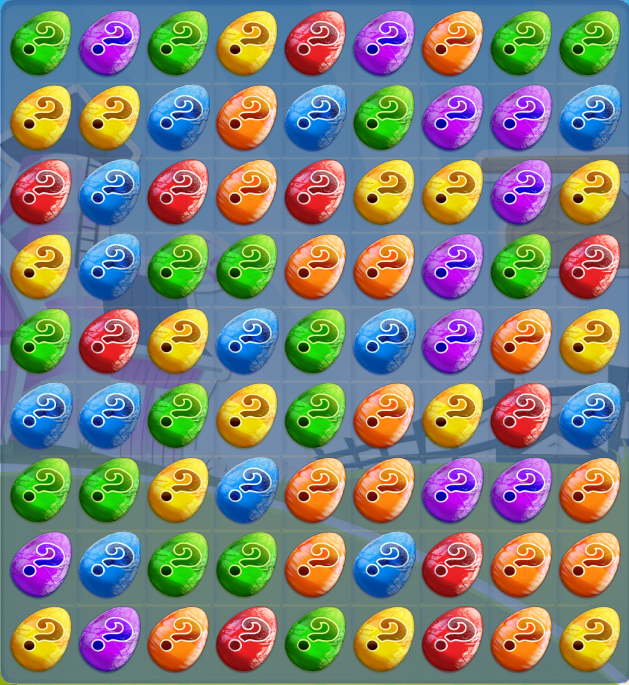 The thing about (gaming) accessibility is that it can be hard to get fired up about if it’s not affecting you. It can even be hard to get fired up enough to write about when your own accessibility issue really doesn’t bother you that much on a day-to-day basis, which is an embarrassing thing to admit when you consider how many people who love (or would like to love) gaming are partially or fully excluded from the experience.

Fortunately, I don’t play baseball games, but according to Cameron Giraldi at Kotaku, MVP Baseball 2004 was a big offender.

However, when you’re trying to figure out which codex entries you’ve read and which ones you haven’t and you’re standing two feet away from a 55” HD screen trying to see the little yellow-orange star in the top right corner of an image that’s yellow-brown, it suddenly becomes a lot easier to go, “What the hell, man? Why can’t I see this and why didn’t anyone playtest for this?”

Before I start throwing out statistics (which I’ve tried to source from scholarly articles rather than just dumping Wikipedia links on you), let me say two things:

Let’s start with my reference to Ishihara. There are several tests for color blindness (which, it turns out, is a poor description for color vision deficiencies) and the only one I was familiar with from the eye doctor was the Ishihara Plates (which you can read all about, as well as the other tests, here). Although it’s not the same as going in to the eye doctor for a diagnosis, I went ahead and took the Ishihara 38 Plates test as well as the Farnsworth D-15 Arrangement Test and the RGB Anomaloscope tests online. It’s not exactly peer reviewed science, but it gave me something practical to go on. All three tests pegged me as weakly deuteranomalic or borderline, which was what I was expecting. 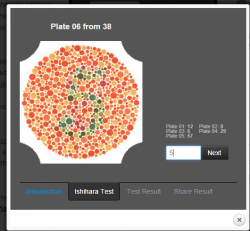 Although I can see that this is a 5, I actually have to strain.

[Ed. Note: They also engendered a lot of cursing from me, particularly the Ishihara Plates, because I could either almost but not quite see ones designed to diagnose deuteranopia/deuteranomaly or I had to stare at the screen with my teeth gritted until the number finally revealed itself.]

There are a variety of different color vision deficiencies, which I’m not going to go into too much detail about (you can read my ophthalmologist source’s entire email and check out more info here), but in short, the majority of color blindness has people being green-weak (deuteranomaly), while smaller proportions are red-weak (protanomaly), red-blind (protanopia), or green-blind (deuteranopia). Because they’re sex-linked traits carried on the X chromosome (the one you get from your mom), they’re much more common in men than women (if you skipped freshman biology: here you go), but in aggregate, color vision deficiency affects about 8% of men and 0.5% of women. 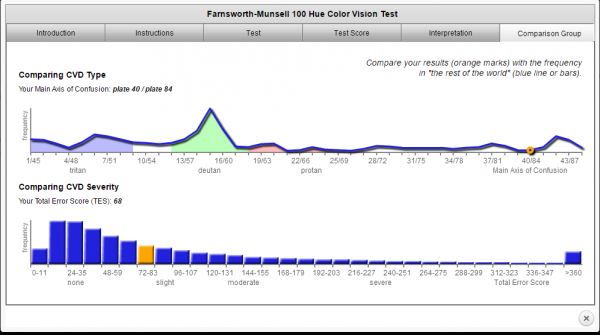 Just color blind enough I can’t be a pilot, electrician, or pilot-electrician.

How I Saw the Light…and Colors, Too

It was the fact that a setting to address color blindness showed up that brought this entire topic to my attention – I was having some network issues and screwing around in the settings of Titanfall when I realized it had a color-blind setting. I turned it on, fixed my network issues, and…wow. I’m not exactly sure what they shifted, but it was probably using blue and orange to identify friendlies and tangoes, as well as applying something called a Daltonization Algorithm to modify the color palette. [Update 04.24.15 While Daltonization is something used when there are just a couple of colors, an entire palette shift can create new conflicts; according to Mr. Hamilton via Twitter, Titanfall changes the colors of key elements which is, “the best way to do it.”]  Although I’m not great at Titanfall, there was a marked-if-not-hugely-significant improvement in my gameplay because I could suddenly see the radar and movement on the screen just a little better. 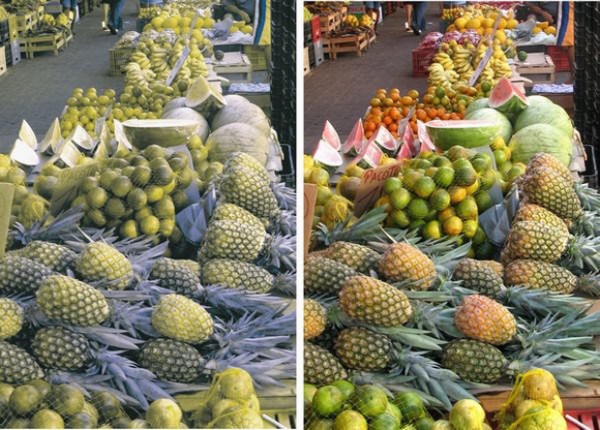 Most image examples are for really serious cases – while I think this is still more severe than what I have, it’s a somewhat more subtle comparison. Kind of like turning down saturation a lot in Photoshop.

I got a little excited and initially called one of my best friends, who just so happens to be an ophthalmologist to grill him ask him for some background – I linked to his detailed email above. I then started doing some research and talking with Cathy, AKA IndieGamerChick, who somewhat unintentionally became a spokesperson for gaming accessibility as a result of her own photosensitive epilepsy.

She hooked me up with Ian Hamilton, a UX designer and accessibility specialist who intentionally got involved in the accessibility field. He’s pretty heavily involved, especially for a guy who got interested in accessibility watching profoundly disabled preschoolers getting to play some games that had been adapted specifically for them and seeing the life-changing impact that had. (He’s also English, so his spelling of words is more correct than my bastardization of the Mother Tongue). Addressing color vision deficiency came about because, “Studios would spend so much time and effort on minor details…only to throw it all away by trivial decisions over accessibility…So really, it just ended up annoying me into trying to doing something about it.”

When you take into consideration:

it’s mind-numbingly stupid that a game studio of any size wouldn’t look at accessibility as a relatively easy way to increase its bottom line. As Mr. Hamilton described it, 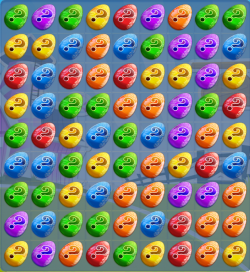 If you’re deuteranopic, you can’t tell if they’re haemorraging human blood or vulcan.

“Candy Crush in particular is really frustrating to see, for most of the game it’s a shining example of how to design in a colourblind friendly way…and then later on they introduce different colour bombs and eggs, which are all the same shape as each other. Candy Crush’s income is measured in hundreds of millions of dollars per quarter…so they must be haemorraging huge sums of money as they start losing colourblind players later in the game.”

Since we’re all in agreement that video games are a business and businesses like to make money, we should also be in agreement that there is a balance between investing resources and money into a game and how much money the game makes for the developer – the game’s return on investment. So, maybe making games more color vision deficient accessible is something really only the big, well-funded studios can do: Gears of War used orange and blue for team colors, World of Warcraft is cranking up its color filtration options, and Battlefield, Titanfall, and Call of Duty either have on/off options or design decisions to minimize negative effects on those who can’t see certain colors all that well? Not so much, says Mr. Hamilton.

“That’s just the thing – it’s not necessarily about having a colourblindness setting. The first port of call should simply be to avoid relying on colour alone to convey anything important. [I]f thought about early enough in the design process, that’s just a simple design decision; the resources needed are pretty small, if any…[i]f thought about early, it can be easy; to go back and unpick everything at the end is difficult and often prohibitively expensive.”

Awareness is the Name of the Game

[Ed. Note: In the event that someone makes an awesome game called Awareness, especially if it’s a creepy, atmospheric thriller with psionic powers, I want a cut.]

In the end, making games more accessible is often as simple as bringing issues into the light. Mr. Hamilton pointed out, “There are even colourblind developers out there for whom the idea of colourblind support has never occurred to…[but] Unreal Engine and Photoshop even have their own built-in, real-time simulators now.”

What really did it for me, though was a player’s response to World of Warcraft’s efforts:

“I’m not color blind myself, but it allows for more people to play WITH me, so thank you, Blizzard.”

Be kind of nice if as many people who wanted to, regardless of who they are or what challenges they have in life, could have the opportunity to be exposed to the awesome world of video games I love so much.

If you’d like to read Mr. Hamilton’s much more detailed email interview, you can check it out here.

Thanks to Dr. Blair, MD; Cathy AKA IndieGamerChick; and Ian Hamilton.