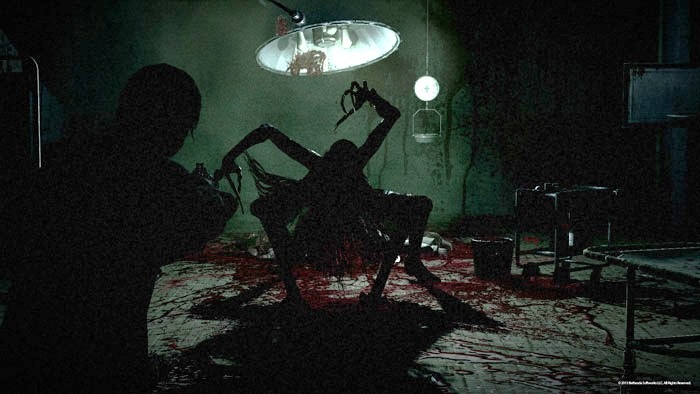 Let it never be said that I refuse to come out of my comfort zone and try new things. I was sitting in front of my Xbox One last night, about to use it for the first time in three weeks and realized I really didn’t feel like playing Destiny because it just hasn’t done it for me. So now what? The easy answer was to buy Alien: Isolation, because I’m a huge fan of the (first two) movies. Because there are brief windows in which I can be easily influenced, I recalled some back-room chatter with Justin L. when we were drafting our Games of October article. In passing, he mentioned that he would be interested in seeing me play a horror game. When that memory combined with some of the negative buzz about Isolation, it was like he had pulled a full on These Aren’t The Droids You’re Looking For on me. I downloaded The Evil Within.

I’ve never horrorgamed before, unless you count The Binding of Isaac, so I figured, “Go big or go home.” I went to the basement, turned off all of the lights, put my headphones on, and fired it up. If you haven’t picked it up yet, I’m a pretty even-keeled person who enjoys most horror movies (movies like the Saw sequels aren’t scary; they rely on a gore/disgust factor and I don’t really have time for them), so I was pretty psyched to try out this “perfect blend of action and survival.”

Two of the games I played most recently prior to playing The Evil Within were Deus Ex: Human Revolution (on hard) and Alpha Protocol: The Espionage RPG (also on hard). These are a couple of games that rely very heavily on stealth, so having to tip-toe around enemies is a skill I’ve got pretty well honed right now. 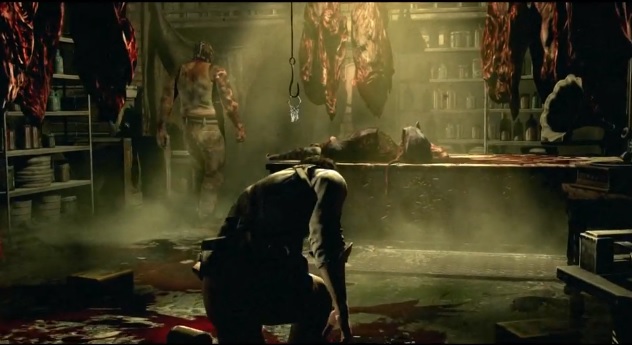 So here I was, sneaking around some weird-assed slaughterhouse, avoiding what seems to me to be a generic chainsaw-wielding maniac, hiding in cabinets and sticking to the shadows and my heart’s ticking along at a leisurely 60 or so beats per minute. I am a little concerned about this guy’s chainsaw blades, because there are few ways better to dull a device intended to cut wood than by using it on 2″ thick steel bars. I complete the prologue chapter, hoping that my blood will get up at least a little bit as I progress.

Can I Borrow a Sphygmomanometer?

Time passes. I’m sneaking around, shanking     bad guys from behind and feeling pretty good about myself. Still not even remotely anxious, but maybe moderately irritated. The film grain effect when it’s dark does give it a ‘realistic’ feel (because the rods in your eyes, which help you see at night, aren’t great at picking up detail), but it’s also frustrating. I’m tempted to turn it off. I complete another chapter and I never even used my pistol.

I’ve gone through a village and wiped out…uh, well, a small village worth of the, um…whatever they are. Humanoid things who wish me harm. I’m heading through the woods and notice a bonfire. I check my ammo and health and medkits and slink around, noticing that I apparently haven’t wiped out the whole village, as, in the immortal words of Corporal Hicks, it “looks like a goddamn town meeting.” I have 16 bullets and the evil people are pretty squirrelly and hard to headshot (which is no guarantee of death), so I attempt to skirt the cannibal buffet quiet-like.

I’m unclear on how a head-shot is more effective than a 2 foot long spike, but I’m easily distracted.

Whether this was an automatic cutscene trigger or whether you can successfully sneak around this demonic gathering, I don’t know, but suddenly I’m being pursued by more enemies than I can possibly kill. I’m running, firing wildly even though I know it’s not going to fix anything. Then…cutscene and end chapter. My teeth are gritted, and I’m leaned as far forward in my seat as I can get. I have to take a deep breath before the next chapter starts.

Don’t Mind Me, Just Passing Through

Several hours in, here’s my takeaway on The Evil Within so far: