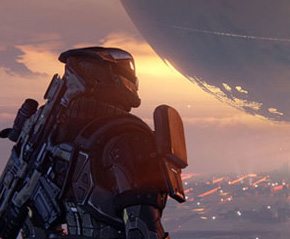 You can always count on September to step up and bring some serious games to the table. After a summer full of indie games and delays of major releases, we are hungry for some meat. This menu is looking quite tasty.

Coop – I pre-ordered this title the day I bought my PS4. For me, it’s the game I bought a next-gen console for. The beta sealed the deal and left me satisfied, but ready for the full thing. Although, I am nervous and excited to find out how big the game actually is. For Justin’s own personal enjoyment, I look forward to it being my first MMO.

Justin L – The game that made me get back into games this summer. I dunno when I turned into a fanboy for Bungie’s atmosphere, but this has been my most anticipated game since it was announced. The guns feel great and I can’t wait to see it trick people into playing their first MMO.

Cole – It’s all about Destiny right? Had a blast playing in the alpha but didn’t want to dive to deep before the game came out so it could be somewhat fresh. The world Bungie has built seems cool and playing with your bros is going to be great. And the loot lust is strong with this one.

Ethan – I can”t play this anytime soon, which is sad but I’ve got plenty to keep me busy. I will have a close, beady bloodshot eye on it though as allergy season is upon us and I don’t hate Bungie related merchandise.

Jason – I barely touched the Xbox 360 beta, but the taste I got was sweet. I hate that this isn’t getting a consecutive PC release, but I haven’t been excited for a console title in a really long time. This title has changed that. I’ll be interested to know if I’ll be the only one eying the 360 version.

Justin G – It’s Bungie, so I’m buying it. Not totally on board with the large co-op missions yet, but I’m inherently distrustful of strangers’ good intentions. Online.

Jordan – I actually haven’t been that excited for Destiny. From the little bit I have seen it’s just reminded me of Warframe – which never really grabbed me. I don’t plan on buying a PS4 or XBone, so I’ll probably just wait until its makes an appearance on PC. Maybe by then everyone’s stories of space wizards and great feeling guns will have hyped-trained me into it.

Aaron – Gimme that space-y, loot-y, Dinklage trippin’ about wizards from the moon goodness, Bungie! I preordered Destiny without much thought, played the beta for a few days and can confidently say that the way to make shooters better is to have hover bikes appear out of your butt. 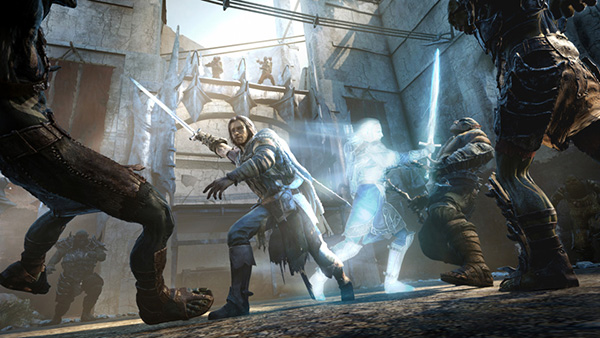 Justin L – I like this formula – combine the top selling mechanics of two of gaming’s biggest franchises (Assassin’s Creed and Batman’s Arkham games), add your own awesome mechanic (Nemesis system), and you probably have something worth playing. Oh yeah, and there’s a strong chance that this will be the greatest Lord of the Rings game ever, too.

Justin G – I was pleasantly surprised with War in the North, and the unspecific specifics of Arkham plus Ezio plus random other thing sounds shiny. Call me a late-early adopter on this one.

Jordan – being the only other game on the list I’ve even heard about – I do love me some character driven, third-person, fantasy RPG. In spite of the fact its a Lord of the Rings game (which for some reason makes me what to disregard it entirely), I’m ready to get back in there and kill me some ugly monsters with a big sword. The nemesis system sounds kinda hokey though. We’ll see if the game carves out a little special place in my gaming heart, or if it’ll be completely eclipsed once I get the The Witcher 3 into my trembling hands. 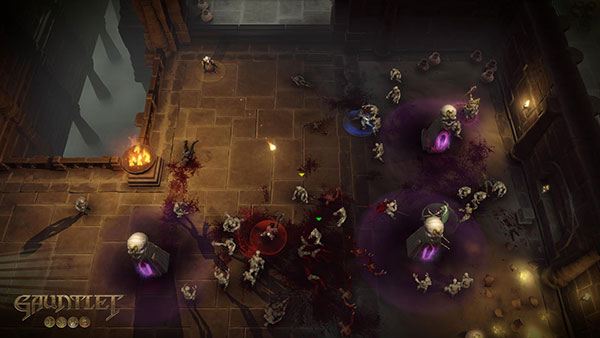 Ethan – I remember this game from my youth, but nostalgia is a poison and I’m unsure how it will turn out (never really got into Legends). After playing Hammerwatch and enjoying it, I think there may be a bit of enjoyment to be had, though it’s a couch co-op game and I lack a reasonable couch and enough people to occupy said couch.

Coop – I’m intrigued by Gauntlet. I loved the game on NES and even played a decent amount of Gauntlet Legends on PSone. I wasn’t originally planning on picking it up right away, but I could probably be talked into it pretty easily for a co-op night. I’m sure it’ll be in my library soon.

Justin L – My original dungeon crawler returns on my birthday. I gotta say that previews have me a bit mixed on this, but Arrowhead knows how to have fun so even if it doesn’t turn out to be the Gauntlet of the future I know I’m gonna have some good times.

Justin G – I plowed a lot of hours into Legends on 64. Call me cautiously intrigued, but is there room for it with so many other co-op games on the horizon? 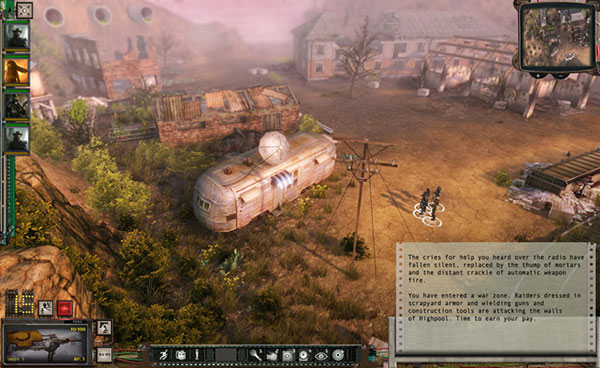 Ethan – I feel like I’ve been waiting for this game forever due to a decade of rumors and most recently, quite a few delays (unlike most, I see delays as good things, rather than bad). Fortunately, Divinity: Original Sin quenched my thirst for turn based RPGs, thus making Wasteland 2″s slide from August to September easier to swallow. That being said, I’m still extremely excited to dive into the game, especially after playing the beta. It’s not for everyone, but I get the feeling it’s just for me.

Jason – This is another one of those early access titles with an extremely steep price. But I will say that I’m with Ethan on this one; this has been on my radar for a long time. I’ll be curious to see what Ethan thinks before pulling the trigger, but I think I’m the most excited for this title. 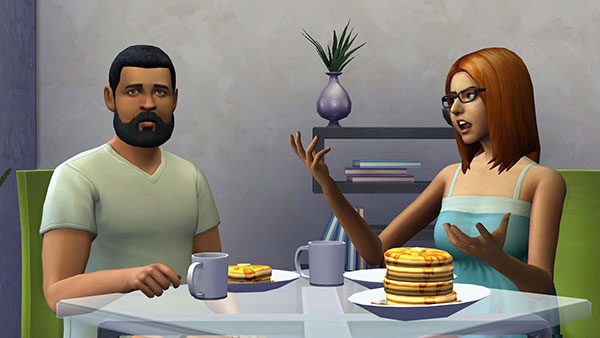 Carrie G via Justin G – Justin bought this (ed.: preordered and wrapped an empty box with a ginned up Sims 4 label) for me for my birthday. I’ve played everything on Sims 3, including expansion packs, so the new houses and character traits and outfits are exciting. I’m coming home from vacation to this, so if my husband seems to disappear for a couple of days from HIS gaming, it’s because mama needs some Sims time.

Jason – Maxis/EA can only mess up one major franchise, right? I’ve seen some early gameplay from Let’s Players that I trust, but I doubt I’ll be shelling out for this title. Will likely get my kicks from the nosebleeds on this one.

Justin L – I was watching some preview coverage of this the other day, you know, so I could make fun of it but still check in on Maxis. I have zero trust in Maxis at this point. Nor do I have the time to engage with Sim anything. After laughing my ass off at some Sims being Sims (4), I unconsciously opened Origin to check out the price of the game. I scared myself awake and shut the application before I did something I’d regret. However, I kind of feel like I crossed a line I can’t come back from and if I’ve come this far… 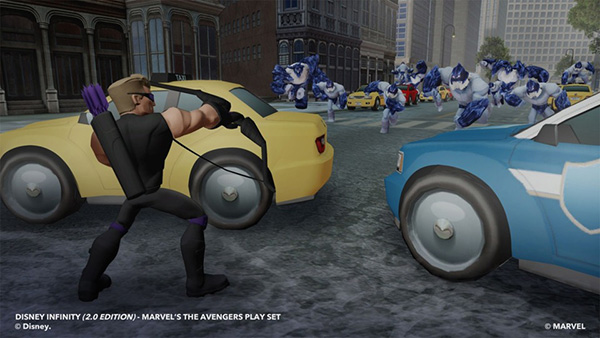 This is the character you want to be.

Disney Infinity Marvel Super Heroes – Jason: Oh the possibilities! Can a grown man of 31-years-of-age keep this one a secret? Hmm… unlikely. It’s probably best to watch this one from a distance. But not a creepy single person hanging out in the park kind of distance.

Theatrhythm Final Fantasy Curtain Call – Aaron: The first Theatrhythm was one of my favorite portable games and it certainly deserves an encore. I still have a weakness for music games and it’s even nicer when you don’t have to hook up large fake instruments to feed the need to rock. Though if I could hook up drums to a 3DS and throw down on One Winged Angel, I’d do it.

Defense Grid 2 – Justin G: Had to mention because of the time I spent on the first one. I will buy this and I will get yelled at for playing just one more level over when I have responsibilities.

Velocity 2X – Cole:  Haven’t played it yet but downloaded it as soon as it was available. On the surface it’s giving me some strong Master Blaster vibes with the in-ship and out-of-ship activity in one package. The verdict is out but color me intrigued.

Planetary Annihilation – Jason: The early access price of this one always seemed a little too steep in regards to how much I would get out of this title. But I have had a hankering for a strategy RTS for some time now and watching Korean Starcraft tournaments has still yet to teach me a new language. (I’m too cheap to buy Rosetta Stone.)

Warframe (Xbox One) – Justin G: I once wrote an article about giant fucking robots saving Christmas. On what planet do you see me missing this title? Not this one, that’s for sure. 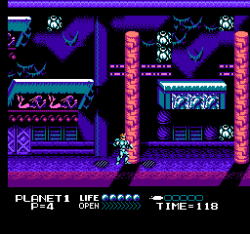 Street Fighter 2010 – Justin L: Yeah, I keep buying virtual console games cuz I’m a sucker, but SF 2010 may be the weirdest game I rented multiple times as a kid and never ended up buying it. I gotta own it, and I gotta see if I can finally get passed the 3rd level.

Fifa 15 – Cole: I probably won’t get this game but if there is a demo I’ll be downloading it. Ever since the World Cup this summer I’ve been intrigued by soccer and have been wanting to play the virtual version. I think once I get a taste I’ll be good but we will see if it leads to a full purchase.

Hyrule Warriors – Aaron: I’m very much a Zelda fanboy (check my GOTY lists), but Hyrule Warriors has a lot to prove this year. When you get Dynasty Warriors in my Legend of Zelda, is the result sweet or sour? It looks gold though, which at the very least gives me something to drool over until the Zelda game hits the Wii U.

9 Comments → Games of September Remember How to Play