This week’s REPLY TO ALL is brought to you by IRObotDave. The question he asked is a companion to last week’s podcast. “What movies should be made into a game?”

It’s hard for me to pick a movie that can be translated well into a game format. I like movies that make you think and wonder what will happen next and one of my favorites is Se7en. But I can only see this as something more along the lines of Heavy Rain. 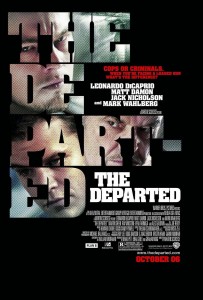 Could this be a great game?

I think The Departed could work but then again it would only work as an open world game where you do jobs for Frank Costello before unravelling the story. Actually the more I think about it, The Departed would be cool because you could have two story lines running concurrently with Billy Costigan and Colin Sullivan working against each other. Play a chapter as one and then switch to the other. I would not envy the game designers in coming up with cool ways to tell the story without letting the player know to much along the way. Rarely is there a twist in video games that you can’t see coming. Once they master that segment of story-telling, then we might be able to further compare movies to video games.

It’s been a while since I’ve seen The Departed, but I think developers would have to really work to differentiate it from GTA style games.

As for my suggestion, the first thing that came to mind was The Bourne movies, although after a google search it looks like they already made a game a couple years back, although I don’t think I know of anyone who played it so I’m not sure how the execution went on that one.  I think the ideal game for that universe wouldn’t necessarily involve things straight out of the book or movie plots, there’s plenty of other spying / action situations to into.  Just talking about the Bourne series reminded me of a really great thriller book I read a long time ago before I had heard of the Bourne books called Vertical Run that was supposed to be made into a movie but never was- maybe a game could take the movie adaptation’s place?

Now that I think about it, has there ever been any action movie series more suited to be made into a video game than the Crank movies?

The Bourne series would benefit from similar gameplay to the Batman: Arkham Asylum games. When they tried the most recent Bourne game it sounded like they made the hand-to-hand combat interesting, but everything else was a bit flat. Throw in some detective work and support for some car chases and you’d have a helluva package if it was polished. I do like the idea of pulling from the books or other source material rather than revisiting the movies. Games and movies should be inspired by one another rather than be direct interpretations. 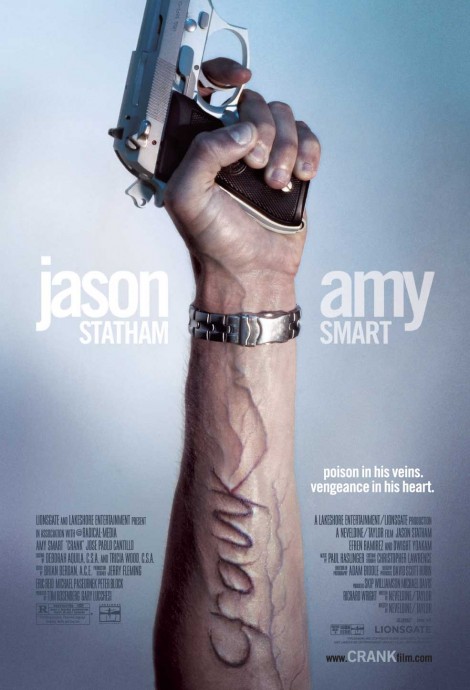 Doing crazy shit to keep your heart rate up? Sold.

I can’t believe a Crank game hasn’t been made, maybe it’s just too obvious. I’m picturing a frantic and crude update of Bad Dudes as a downloadable game.

I’d love to see a game based on Gladiator. Don’t tackle the story, but give me the varied arena scenarios to play out on top of a solid fighting engine. Of course, it has to be focused on entertaining the crowd above all else which would make room for some interesting “fatalities.” If the developers were feeling particularly brave, you could even do some competitive multiplayer and co-op for the larger scenarios.

Dude. Yes. Gladiator would be amazing. Someone needs to get on that right NOW! Maybe the arena fights with a cinematic storyline in between and possibly some decision tree dialogue similar to Mass Effect to gain loyalty with other gladiators and what not.

I never saw Crank all the way through, but it seems like that concept would work pretty fun for a game. What else would be cool?…

I don’t know… I’m thinking about the Gladiator game and nothing else sounds nearly as cool. I did just find this older game called Colosseum for PS2 that looks pretty similar to what a Gladiator game might be, but let’s just ignore that.

I would have never thought of a Departed game, but the ability to play as conflicting sides of a story would be interesting. Elder Scrolls: Oblivion had a small Gladiator like section as did Fable II and I imagine it could be similar in terms of a single player experience, but what would be great is the introduction of multi-player. Think of the carnage as 10 guys fought it out with all types of weapons, rule sets and the occasional chained animal. 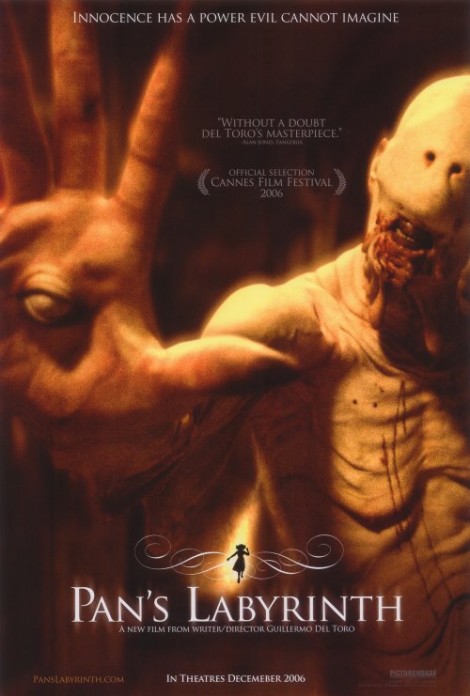 This could be one messed up game.

I think a game set within a world Guillermo del Toro created would be really neat. I am thinking Pan’s Labyrinth would be awesome, especially the juxtaposition of WW2 and a young girl drifting into a magical world. The Orphanage and The Devil’s Backbone are two supernatural themed movies that could make for  Crimson Butterfly like games with a more adventure/puzzle solving approach. The imagery of that man has yet to be topped in my book.

A Guillermo del Toro game would be fantastic in many ways. But the developer’s would have to come up with some original ideas or I could see those games being retreads of previous efforts. Imagery is where that man shines, but as we’ve all seen in the past, just because a game looks good doesn’t make it good.

I asked my wife (RatedGarface) her opinion on this question and she said the musical Chicago. With the advent of the Kinect, the gamut of the movie musical is covered. You have singing, dancing and now the acting game Yoostar 2. I don’t know if it would be a huge success but there could be some interesting implementations of old ideas to create this new product.

I never played the Gladiatorial sections of Oblivion, but if they are anything like Fable II I’m thinking they are missing the different types of weaponry, enemies, and vehicles that I’m picturing for the scenario based combat in the Gladiator game. I hate it when I get myself excited about something that doesn’t exist haha. 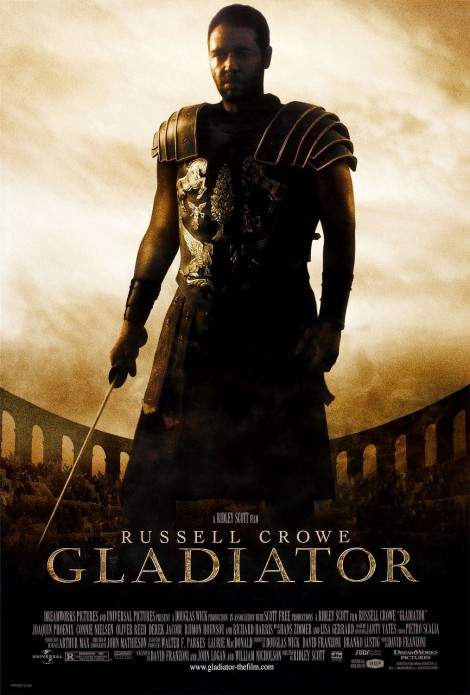 Will you not be entertained?

I’m interested to see what del Toro adds to THQ. Rumor has it that he is working with the Red Faction team to start and that series could really go for an overhaul on the style side of things. Everything about Guerrilla‘s graphics was serviceable and average. The focus was on the destruction, but I was never pulled into the characters. That connection is what will take the series to the next level and del Toro can definitely help in that area.

I don’t even know what to say about Chicago, because next you’ll suggest Glee and I’ll have to leave this conversation even if they are good ideas for that audience. What manly movies need to be made into games, that’s what I want to know! haha.

Shoot Em Up would make a great game.  Lots of action with some great humor to keep you interested. Carrots give you health but also act as melee weapons. I’d also play Grindhouse: Planet Terror.  Although it might just end up being a more gory remake of Left 4 Dead.

Dude the carrot mini-game possibilities in Shoot Em Up are endless.

I don’t know why or how, but I want a MacGruber game. Especially if it involves celery.

Second-of-ly, it seems like science fiction movies seem to lend themselves to games very easily. I mean, it’s almost impossible to count the number of Star Wars games. Even the ones that were direct adaptations of the movies were fairly good, though often impossibly hard.  I also seem to remember a Blade Runner game for the NES? Or maybe I dreamed that. The Lord of the Rings games were fairly decent too. Zombie movies tend to make great games too, like the Planet Terror suggestion, even though the zombie game thing has more or less been done. That doesn’t mean I wouldn’t enjoy swinging a cricket bat as Shaun, fighting my way to the Winchester.  I didn’t see The Departed but knowing about it, I could definitely see that working as a game.  Same with the Bourne movies, though I had no idea they made those already. 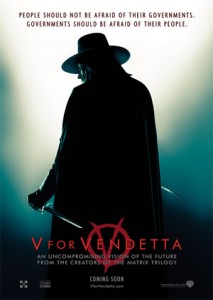 Knifing dudes and planting bombs. Sounds good to us.

V for Vendetta could have made an interesting game. Kniving dudes, planting bombs, avoiding Fingermen.  Also, this is random and I know they made one for I think the SNES, but I would like to see an updated Rocketeer game. I always thought that was a very game ready concept.

If you like rocketeering you should try Dark Void. I thought that game kicked some ass… at least the action and rockety part.

Maybe another good question would be how you can take a bad ass movie that isn’t an obvious lead into a game design and make a great game out of it? Say for example a Big Lebowski game. What could the Dude do in a game that would be as entertaining to play as the movie is to watch? The only movies that come to mind right off hand are all the obvious run and gun type roles but what about something like 12 Monkeys?

Ooh I know! something like National Treasure would be sweet. A game where you raid tombs seems like a great concept… but it would need to star someone way hotter than Nicholas Cage.

I also had a thought, what about a game based in one of the many fantastical worlds cooked up by Studio Ghibli? (Spirited Away, etc) But, then I looked it up and there are already two versions of one coming out in the next year, one for the DS and one for the PS3- should be interesting what they come up with.

As I think about it more, part of the problem with games based on Crank and Shoot ‘Em Up is that the movies themselves were inspired by games (and to a lesser extent Looney Tunes) so I’m not sure how easy it would be for developers to come up with something non repetitive.  But I did watch The Rundown again last night and a game based on the bounty hunter lifestyle of The Rock’s Beck has potential.  To quote Walken: “That’s a lotta cows.”

The whiny escort missions in The Rundown may wear a bit thin, but hopefully the shoot-out level during a stampede would make up for it. 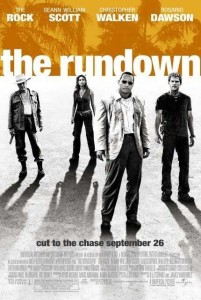 Walken and The Rock in a game together. Need I say more?

Maybe they could combine the game with the Yoostar game that Cole was talking about so that you have to do a solid Walken impression before moving on to the next level. He has at least 3 speeches in that movie worth duplicating.

There a lot of movies that we’d like to see made into games. From Crank to The Departed, to the crazy imagination of Guillermo Del Toro. It might even be possible to one day have a game based on a musical. At the end of the day, we are only idea men. It’s up to the game developers to make these games and make them worth our money.