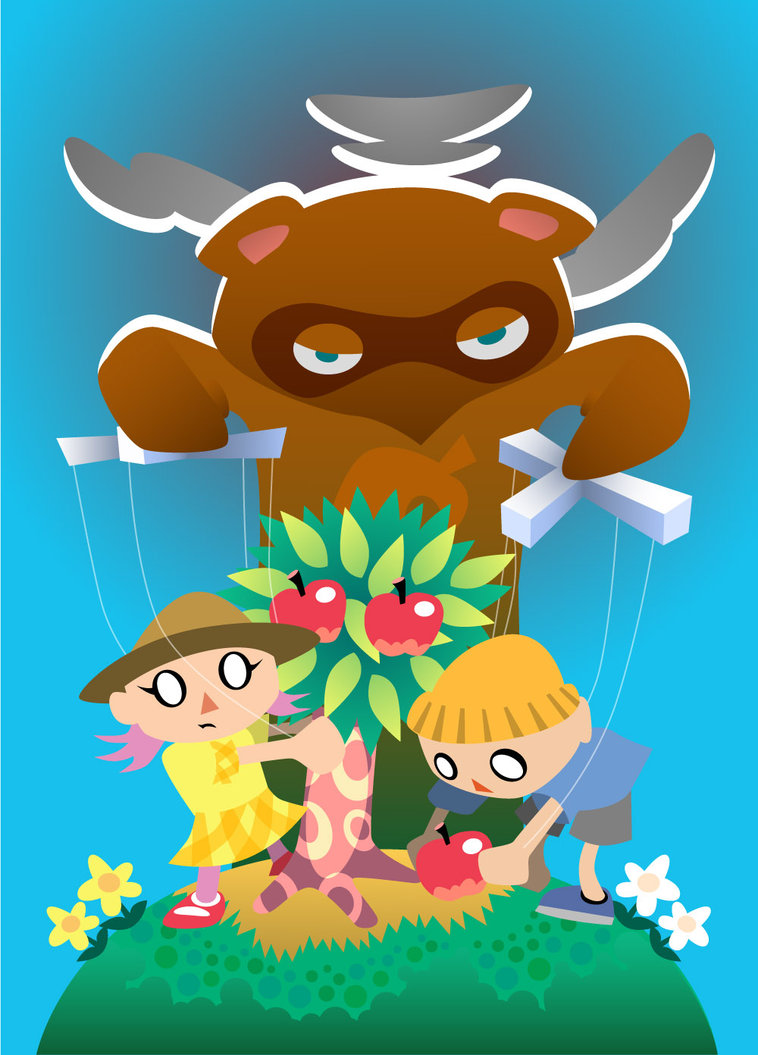 What game universe do you think you could dominate professionally? 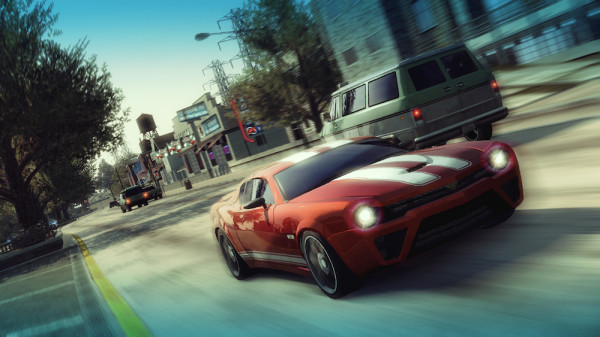 Justin L – I think the most obvious choice is Burnout’s Paradise City. The entire city is populated by sentient cars, yet it is full of empty (but great looking) office space. I’m not sure if there’s a safety concern there or not preventing people from co-habitating with these car beings, but if you could strike a deal with the local automobile magistrate I’m pretty sure there’s a really affordable infrastructure in place to launch a new technology business. I don’t think you’d want to necessarily cater your business to the locals (that’s an option though), but just the lack of normal start up costs and overhead should give you a leg up on your competition.

Back to the local population. I’m not sure how these sentient cars handle routine maintenance, but I think there’s definitely some profit to be made in the detailing business. Even if their technology allows them to regenerate car parts, that cannot replace the personal touch of some hands on deep cleaning from life forms with opposable thumbs.

Jordan – I’m sure there is a huge pin-striping void created by the lack of finer motor skills. As long as you practice your free hand technique, you’ll do just fine Justin.

I really can’t picture living anywhere other than in Hyrule. Aside from my fanatic love for the Zelda series… I see an industry ripe for a bucky, entrepreneurial visionary to revolutionize the landscape. The Kingdom of Hyrule has seemed to always suffer from a terrifying lack of glass bottles. For a society with such advanced medicine, they don’t seem to have a reliable means to store or transfer these life saving potions. They could use ceramic pots but I’m afraid the life expediency on hyrulian pottery is very short.

I’ve been to an actual glass manufacturing plant for work. The whole process is beautiful, dangerous, and seemingly not that difficult to replicate. I wouldn’t need an investor to help get the factory set up. I’d start with a small landscaping business until I’d unearthed enough rupees to start construction and hire and train the glass artisans. Then we’d partner with a local alchemist (or witch – I don’t care who’s bed I have to lie in) and start Hyrule’s first global pharmaceutical conglomerate. And then, the kingdom and crown will be mine!

Justin L – You aren’t worried about the landscaping competition from upstart heroes? Maybe if you got a crew together or a security team you could keep them away from the more lucrative bushes. Actually the security business may be more of the route to go in Hyrule. You can protect the local flora and pottery from these heroes. Granted they could destroy your security force if they wanted to, but I don’t think they are the type of people to murder innocents just to smash one more pot. They have more important business to take care of. 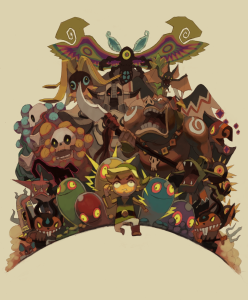 Security options are there, effectiveness may vary. Image by tot

Jordan – While I like the idea of hiring some Moblins and forming Hyrule’s version of Blackwater, going around beatin’ down on any hooligan that might mess with Miss Beasley’s prized rose bushes, where is the end game? I have my sights set on ruling! King of Red Lions and Ganodorf be damned! Once I corner the market on healing potions… I’ll be the one who lives forever!!! MUHAHAHAAHHAHAA!!!!!

Ethan – Not to go back to a conversation we had a few weeks ago, but the denizens of the Borderlands universe don’t really do a whole lot outside of standing around and offering quests. It’d be quite easy to just turn down aforementioned quests and trip them or something.

Justin L – I dunno if I’d want to deal with Handsome Jack, but you do have a point that most of the characters aren’t too mobile. They are more like interactive landmarks than active citizenry. However, if you could somehow make a profit on every single quest these characters are handing out, you could probably stay off of Jack’s radar.

Chris – I was just talking to my brother and he had an amazing response to this question. So this idea is credited to Chris Wilson.

The people who live in the world of Goat Simulator are always moments from injury and death. They’d leave but there is a giant invisible wall preventing them from escaping this sleepy suburban town. So really good health care and life insurance are essential for the residents of Goat Simulator…. and would come with a huge price tag. The people of Goat Simulator seem to be doing alright financially. I’m guessing the Low Gravity Research Center pays well. They own very large beautiful homes that are unbelievably resist to demon goat attack (I’d love to hear the contractors up-sale pitch for that improvement). They can usually be found partying and having having a good time over by the never-ending drift car. So for a little town with tons of money, a door to door insurance salesmen could make a killing… you know… before the goat comes along with all the actual killing. And don’t worry about having to pay out any claims. They signed up for the jet-pack goat injury… not hang gliding goat with a giant boulder injury. Hey, someone should financially succeed from the suffering of others.

Justin L – The Goat City Insurance salesman mean sounds like a nice gambling opportunity with trying to sell the people on really rare but high risk scenarios vs keeping the more likely scenarios out of the policy.

I can’t get through this topic without bringing up Animal Crossing. These “people” elect their new mayor by choosing the next random schmo that gets off the train so taking power won’t be hard. Staying in power and turning a profit though, that’s the trick. You need to change their way of life and push the Nook family out. The secret is bringing a sophisticated technology infrastructure to the town and taking a page out of Amazon’s playbook. These “people” rely on each other for getting new items. Everything is about bartering and trading. Being able to buy items online and have them delivered to your door by drones would change their lives entirely. No longer will apples have to be delivered by the random actions of tourists. You will be a hero to this town, and you will own their lives. 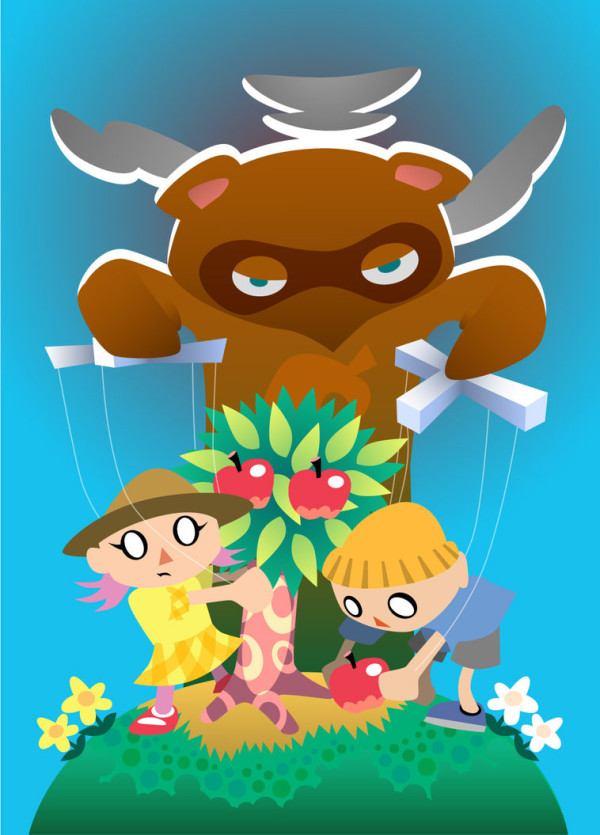 But who is pulling your string, Tom? (Art link)

Justin G – Please, please stick me in the Elder Scrolls world. I’d spend a little bit of time learning a good, solid cloak spell and/or saving up money to buy the potion. Then, posing as an NPC with a quest in mind with promises of treasure for a measly 1,000 gold, I could send mid-level heroes with a fat stack of cash but not a great level of skill to pick a fight with, say, a bunch of barrow-wights tens of levels above them. Following along closely behind them, I’d wait until the sounds of battle subsided, cloak, and go inside and rob their corpses with the barrow-wight none the wiser. If they succeeded, I’m still up 1,000 gold from the fee I charged them for telling them the location of this ‘hidden’ barrow mound.

Even if they survived and there wasn’t any treasure, how many times have you gone on a side quest to find mediocre reward and then remembered who sent you and taken revenge upon them? Probably not many. This is a no-lose situation and, in the process, I get to send a bunch of idealistic, obnoxious, doughty heroes to their doom for my own amusement.

Jordan – If its easy money you’re looking for in the world of Elder Scrolls, Gifford, just carry a large pot with you everywhere.

Unless you just really like the idea of sending young starry-eyed heroes to their doom and looting corpses. Because I can get behind that idea! 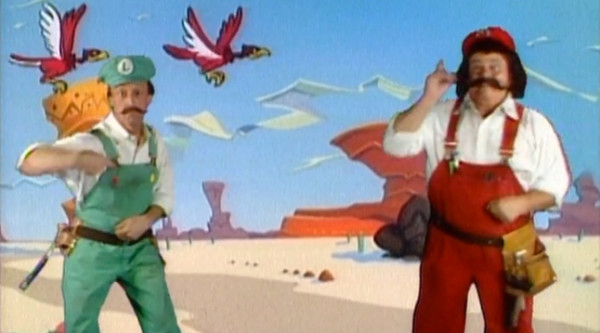 Justin L – Now I’m not the heroic type, nor am I as in shape as I should be, but I have a feeling that I could save the Mushroom Kingdom if I had to. This is assuming if you believe the version of the story that the Mario Brothers are actually Earth-based plumbers who randomly show up in the Mushroom Kingdom. If so, I’m going to guess that I am as strong and as good of an athlete, if not better than those two. So obviously when you arrive in the Mushroom Kingdom from Earth, you are given some natural strength and agility boosts. That being said I wouldn’t exactly need to save the princess as much as I would need to dispose of Bowser once and for all. After he either cowers or forcefully respects my superpowers, there’s no one really left to stop me from ruling the Mushroom Kingdom. No business expertise required this time. Just don’t tell any other human that’s more physically gifted than I am. (which would be most people outside of traditional plumbers)

Cole – I like the idea of going in and kicking ass in the Mushroom Kingdom but I was thinking about taking down the special suit manufacturers there. To think that they are hiding all that potential money in bricks (don’t get me started on the coins) just waiting for the right plumber, princess, or toad person to come along and break the suit out. I think teaching the Mushroom Kingdom a little capitalism could make me rich. Everything is free in that place except for lives. I feel like once I have purchased 99 lives, all that is left is to get rich. Because I can’t die trying (the whole 99 lives thing).

Nintendo’s games have left lots of room for takeovers (hence all the sequels), but Skyrim may be the most ripe for the picking considering you can practice most of your plan in game before finding a way into the world itself.