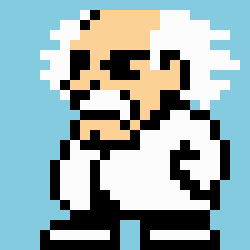 Not Pictured: My brother in law, Dr. Rowe. Yet.

I’ve seen a Game Jam in the flesh, but I don’t Jam (that’s what it’s called, right?) because I lack even a rudimentary understanding of coding, so watching people create games from scratch in a collectivist twister of caffeine and e-cigarettes is borderline sorcery to me. Similarly, when my brother in law, a MD/PhD specializing in pediatric oncology gets on a roll, I can keep up with him for about two sentences, provided I rhetorically tackle him about the ankles and hold on for dear life while he expounds.

So, when “Game Jam + Cancer Data = Crowd Sourced Genetic Analysis” pops up, I immediately think “Oooh! Magic!” …Or at least I think of Isaac Asimov, who coined the “sufficiently advanced technology” bit and also wrote the Fantastic Voyage, which involved a shrunken submarine (and Racquel Welch) going into the human body and doing medicine. Unfortunately, Play to Cure ™: Genes in Space isn’t about smart phone users piloting nano-tech hunter-killer bots through their neighbors’ bodies as a supplement to their immune systems.

What it really was is nearly as cool, though. Cancer Research UK teamed up with a group of people I envision as Gibsonesque Technomancers and a mess of light-side Drs. Robotnik and Wily from Facebook, Amazon Web Services, and Google to Jam a game that would analyze DNA microarray data in large chunks without tying up valuable computation time at research labs.

If your genes look like this, you’re probably a potato.

It turns out that one of the genetic faults that cause cancer is called Copy Number Alteration, which occurs during cell division and can result in chunks of your chromosomes being duplicated or deleted. Thing is, while computers can do the work, it’s resource intensive and, the datasets like the one above are particularly well suited to the Mk 1 Human Eyeball’s pattern recognition abilities. If you take that microarray data and stick a skin on it, it goes from “<groan> That looks like science!” to “Hey, look, I can successfully navigate an asteroid field without statistics!” in a hurry, as seen below.

The game is based upon two main goals: mapping your way through the asteroids to collect “element alpha” (a gameplay element/currency) and how you fly through the asteroids, collecting the element alpha. At least according to their own press, just playing the game can save oncological researchers hours of time to do other, more important things, like seeing how well Titanfall plays on a research supercomputer*. I downloaded and played a little bit and while it’s not the space version of Mario Kart, it tugs at my competitive strings hard enough I’ll probably pick it up from time to time for 5 minutes at a go. Also, it’s free and it apparently helps cure cancer, so I’m in.

You can download it from the App Store and Google Play.

*Which I’m sure no responsible scientist would ever do. That was a thoughtless jab and I apologize.