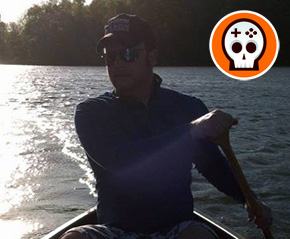 I got through 31 games in 2013 versus 25 in 2012, yet I didn’t get to play a lot of games that should compete in the Game of the Year category (Brothers, Gone Home, Tomb Raider, BioShock: Infinite…look, I have a backlog, okay?) I think the discrepancy is pretty easy to pin down: I got past my curmudgeonly ways and played a lot more multiplayer, which extended the life of several games.

I also continued my habit of playing 2012 and earlier games in 2013, unintentionally skipping big titles, unknowingly buying hugely under-performing games, and stumbling onto some new ones that surprised me like a slap on the ass. A twitter exchange with Bill Stiernberg from Zeboyd games (Cthulu Saves the World, which would win the Saints Row award if it weren’t for Saints Row 4 for being so damned funny) made me realize that being a grown-up (and one who’s spending spare time doing things like putting cribs together – yes, there’s a small GiffTor on the way) made the 2-10 hour gameplay games all the more attractive.

At the risk of stating the obvious (and I am), 2013 was a little bit interesting because we got to see what totally mature consoles looked like and had a small window into the new ones – it’s clear that the programmers, first, second and third party, have become comfortable with the systems that they’re working with and the tools and engines they’re building the games with are at their peak.

The reason I think this is worth mentioning isn’t for a BioShock to BioShock Infinite comparison – both were beautiful, smooth moving games, and it’s not even for Skyrim, a beautiful and incredibly expansive game coming out very late in the 360/PS4/Wii generation. It’s for the comparative value of Dead Rising. I got the original when I bought my first Xbox 360 and I got Dead Rising 3 with my new one. As I’ve talked about with the other guys in podcasts, I haven’t been chomping at the bit for shinier graphics (which, considering how Dead Rising 3 looks, is a good thing). On the other hand, being able to play this sandbox zombie apocalypse game with an impressive amount of onscreen zombies and a surprisingly diverse number of unique zombies/death animations is evidence of what the early-stage systems are going to be capable of. While Dead Rising 3 isn’t any shinier than anything on the late-cycle 360, the little details are something I’m not sure the X generation could have handled. It’s an exciting window into what this generation will bring (especially since they didn’t screw with the controller too much).

Let’s talk about what I did play in 2013 that is worth mentioning (and, along the way, heap shame upon a few games I unfortunately found myself possessing):

I was on eHarmony. It’s actually how I met my wife. On one occassion, prior to meeting my spouse, and after having sent a lot of emails back and forth with a clever and funny woman, I went on a date with her. She had appeared pretty darn cute in her face-only headshot; there was a reason her picture was face-only and I’d argue it bordered upon dishonesty. It also probably served to cement the fact that I’m a shallow individual and married up.

Aliens: Colonial Marines, a game I have been looking forward to with great expectations for several years (a hope encouraged by Gearbox’s showing at PAX 2012), was the game equivalent of that woman. That’s not fair. To her. She was funny and clever. Aliens: Colonial Marines was a steaming pile of crap that I paid full price for. Schadenfreude, enter stage left.

The “I Dreamt I Was Picked Last in Gym Class” Award – Trials: Evolution

Look, this is modern-times Excitebike, which made it worth playing. On the other hand, picking it up for like $2 10 months after all of the other Horrible Night crew had played it was a candy-box full of pissed off bullet ants. Every course I ran had the ghosts of Josh Lee, Coop and Justin L. taunting me from the very first track onwards.

Halo 4 makes my list for two reasons. One: I love the series’ story and gameplay and the shift-over from Bungie to 343 Industries was seamless in terms of both. Two: Some of the fiction describing the Forerunners and the conflicts, which I’ve read, was written by Greg Bear, who is kind of a big deal in Sci-Fi. Although the new weapons, for the most part, didn’t blow me away (being pretty clearly tailored to equivalency for multiplayer), I did really enjoy the environments and got some emotional resonance from seeing gaming’s sexiest non-corporeal Artificial Intelligence go crazy (which gets a big question mark for me because I’m still unclear whether Cortana is just Dr. Halsey’s brain scan…or a forerunner artifact. It’s conjecture and I have trouble letting go, so don’t harsh my buzz, man.)

The “Nuclear Fusion/Virtual Reality Is 30 Years Away” Award – Defiance

Kind of pretty, but in that vacuous, nothing-to-say kind of way.

Right after this came out and I’d gotten to play for a little bit, I wrote up a Tried It for Defiance, mainly because it was my first foray into the MMO world. Time has passed and one thing I wrote about still stands: I think the idea of some TV interplay with an MMO is cool. I put a decent amount of time into Defiance and, while the story-missions were entertaining enough, the gameplay didn’t blow my skirt up. Why is it on the list? Because someday, someone is going to get this type of format right, and when my kid comes home to tell me about this awesome ractive game, I’ll be able to say, “Yeah. That’s not new. Trion did it back fifteen years ago.”

Just saved the world, listened to some Aerosmith, imagined being Ben Affleck.

One emotional reaction that often gets overlooked in a game, perhaps because it’s fun and not requiring of a significant critical theory background is humor and laughter. Until Saints Row: The Third, I’d never laughed harder at a game in my life, Grim Fandango included. Taking the award (which I just made up but may reuse later) is its sequel, Saints Row IV. It was, in a word, ridiculous. I’m not going to go through an entire review of the game, and there were certainly things about Saints Row: The Third that I enjoyed more gameplay wise, but I wouldn’t trade climbing a rocket ship to disable it while Don’t Wanna Miss a Thing plays for anything; my wife actually had to check on me to make sure I wasn’t suffocating from laughing so hard. With the liquidation of THQ, it’s a happy circumstance that Volition Entertainment found a new home with Deep Silver. I don’t know that we need a new Saints Row entry on a yearly basis, but the last two have provided such a light-hearted counterpoint to the Grand Theft Auto series that I love having them around.

Although he didn’t refuse to talk to me because of this hole in my gaming, Cole had told me that his love for this series was strong, so I finally got around to it. I still haven’t played Uncharted 3 because I was working with a borrowed Playstation 3, but I did manage to power through the first two games in a little less than 5 days (our A Call to Gamers 24-hour Charity Marathon helped).

As the PS3/Xbox 360 generation came to a close, I didn’t feel like I could miss out on the entire series…and I’m glad I didn’t. If you haven’t played these, you like Indiana Jones movies, and can get access to a PS3, you owe it to yourself to get your hands on them. Although I’m still working out a way to get some time in with Uncharted 3, I finally figured out what all the fuss was over Nathan Drake and his misadventures (and holy shit, that opening scene in Uncharted 2! I know. Old news, but so is the fact that Darth Vader is Luke’s father and that hasn’t changed kids’ reactions to it.)

The “Holy Shit, This is Why Independent Beta Testing is Important” Award – Syndicate

Syndicate is Deus Ex: Human Revolution-lite. It has some fun play mechanics like taking over your enemies’ minds so that they kill their teammates and then themselves and mechanically it is a very competent shooter. Its storyline isn’t half-bad, its weapons are fairly entertaining with good-bordering-on-unique secondary fire modes and its sound production is top notch. 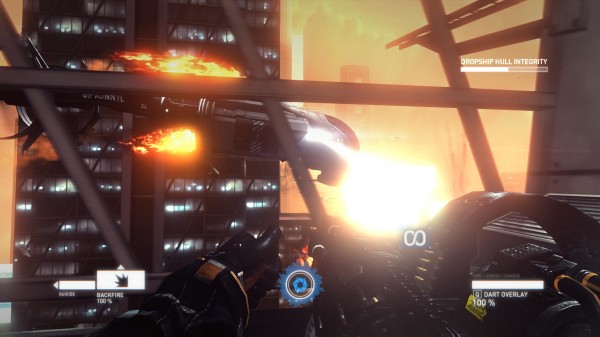 BLOOMZ! WELCOME TO THE FUTURE, WHERE EVERYTHING IS WHITED OUT!

However, this game has so much bloom lighting that I had to ask Josh Lee and Justin L. if there was something wrong with my eyes. There wasn’t. What there was is a proliferation of lighting effects so massive that it is like J.J. Abrams cloned his Star Trek-directing self a hundred times over. No, seriously. There is even an “additional lighting” credit. For like six people.

This is why you get outside feedback, folks.

The “I Can’t Quit You” Award – The Walking Dead – Season One: Episode One

This is a brief interlude for an entry that is only kind of a game. I don’t have anything to say about this great…game-cinematic experience that anyone else hasn’t said before in all of the print dedicated to it other than this: every time I thought about playing, I was like, “Erm. I dunno. It’s hardly a game…” Two hours later, I was totally engrossed and couldn’t put it down. I’m at the end game and still haven’t finished it, mainly because I can’t imagine leaving Clementine alone. Even if it’s not a traditional “game,” it takes a special piece of work to freeze me in the end game because I don’t want to let a character go.

I’m sure I’ll laugh at my complaints of having a back log at this time next year. I’m going to be a dad, and that’s awesome, particularly because being the gamer who doesn’t have the time to play everything and review everything (and passes along a love of gaming to the next generation) is kind of our schtick.