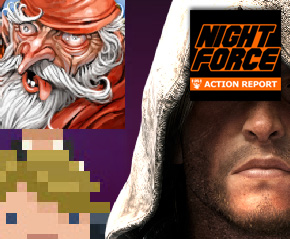 What Aaron and Justin lack in a third member of the show, they make up with hats. Aaron is still catching things but is mainly into pirating. Justin recaps the games of the charity marathon before returning to his Tiny Death Star. Plus spaaaaaaaaace.

Night Force Action Report – The editorial video game podcast where the HorribleNight.com cast gets caught up on the games they’ve been playing, new releases, brainstorms original material for the site, and pitches a few game ideas.

This show was recorded live on Twitch.tv/HorribleNight. The final video will be available on YouTube.com/HorribleNightTV.