Last week while I was leaving work, I was stopped by no less than 5 people asking questions about where the bathrooms are or what time does the buffet close. I thought to myself, “How can I avoid these situations?” If there was only some way I could get out of here without being seen. It was then that the lessons of Assassin’s Creed II became clear.

The Lessons of Assassin’s Creed II 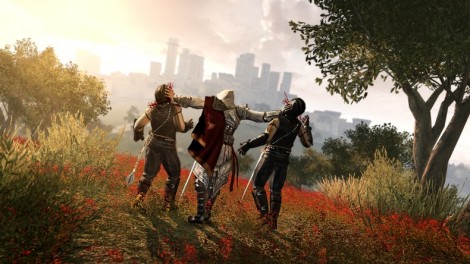 I learned something today. I learned it’s not all about running around killing people with no thought of the legality of the action or figuring out a way to get away with the crime. Sometimes you have to just go up to someone in the streets and stab them in the neck for everyone to see. Sometimes you need to jump off a building and stab two people at the same time with wrist knives. It’s really your choice.  I’m not saying you have to do this sort of action in your birthday suit as a hooded cloak might be the best option. Thanks, Assassin’s Creed II.

I learned something today. I learned that if you walk among a crowd of people you become invisible. It doesn’t matter if those people are prostitues, clergy or regular old joes. If law men are looking for you they can’t see you. Remember if you commit a crime, find a group of people to hide in and you’ll be fine.

That town crier can't even see me.

Some pieces of literature and games would have you believe a simple cloak could make you invisible. You wouldn’t believe how many kids there are at Hogwarts that you could hide amongst without using a cloak. Or you could just throw some money on the ground. People love free money and those guards just don’t earn a high enough salary to ignore money on the ground. Thanks, Assassin’s Creed II.

I learned something today. I learned that if you climb a tower, no matter the height, you can jump off of it and land safely in a hay bale. But only if you swan dive into a half flip back flop. It doesn’t even have to be a tower, it could just be a two story building! If only I thought of that when I climbed that tree in fourth grade and started bouncing on a top branch like I was surfing a twenty foot wave in Hawaii. It broke and I fell, slamming into as many branches as I could hit before finally hitting one of the big ones near the bottom and wrapping around it like a piece of bacon around a steak. I finally came to a rest in that narrow patch of grass between the road and the sidewalk. There was hay in the yard because they were re-seeding the grass. If only I learned the way of the assassin sooner. Thanks, Assassin’s Creed II. 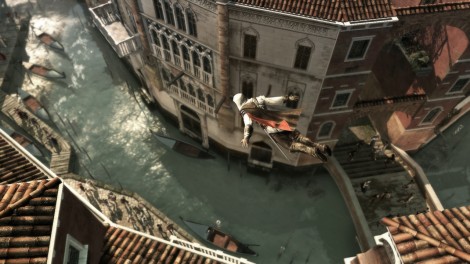 Okay, so maybe diving into water is a safer bet.

If I had known of these things before I played Assassin’s Creed II, I might not have the luxury of a “falling out of a tree” story. Yet, if I took a swan dive out of the tree, and landed safely it might have made the newspaper. I was in a video once, where I was chasing this guy. I wouldn’t have had to run so much if he had just found a group of people to hide in. And think of how awesome a chef I would be if I had wrist knives. That or I’d give Freddy Krueger a run for his money. Thanks, video games.