The rest of the HN staff has been giving me a really hard time about my inability to finish games this year. I’m not making excuses, but my gaming habits have certainly changed in 2013 alongside our increasing amount of livestreams. I will agree, I have blown a few opportunities to finish a few of the biggest releases of the year, but I can’t help but think even if that was out of the pictured that I’d still be focused on smaller games. I’ve gotten a lot out of downloadable/indie games this year and this weekend I got sucked in more than usual when I completed two of the better games I’ve played in a long time – Outlast and Brothers: A Tale of Two Sons. 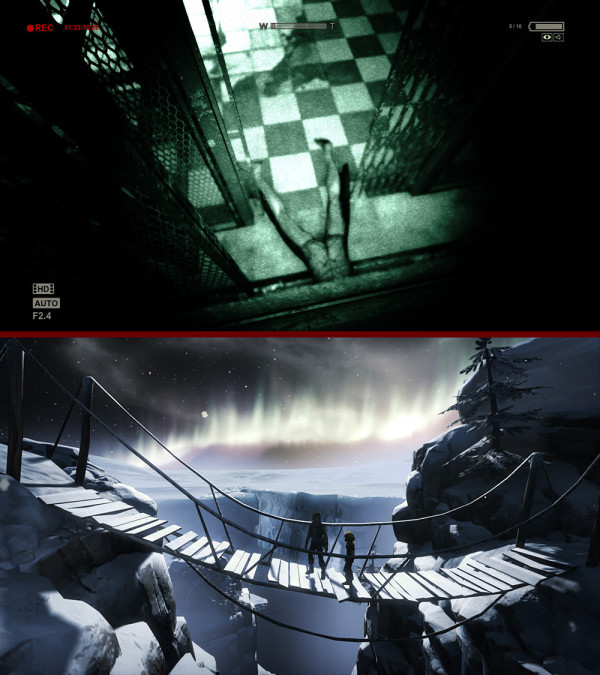 Quick summary of my weekend.

These games could not have been more different, but I loved both for how much they immersed me in their game worlds. I couldn’t get enough of either game, as both concluded entirely too soon. I went into the weekend with the goal of finishing Outlast so I could fuel my upcoming horror podcast episode with Ethan. Horror games can really sap your energy and your playfulness. After finishing Outlast, I just felt a bit disconnected from the real world and kind of numb to the issues of the day. I mean, I just went through a non-stop chase through an insane asylum so it was kind of hard for me to get upset at a puppy peeing on the floor of my house. I love horror movies and games, but there’s a reason I try to watch/finish them at the end of my day rather than the middle of the afternoon as was the case this time. Apologies to those that had to interact with me after my experience.

When I finally came back for more gaming that evening, I needed a happiness fix. I needed a dose of whimsy and adventure. I settled into the world of Brothers: A Tale of Two Sons due to the wondrous world it had placed in front of me during my first session with the game. Soon enough though, the game took a decidedly dark turn and the brothers were up against some evil events. I really didn’t expect the turn at all, but luckily I was eased into it and hooked in for the rest of the ride. Due to some other plot advancements, it became apparent pretty quickly that I was going to have to see this game through that night. I’m glad I did, because without spoiling my upcoming review and where the story goes, I can tell you that I will remember Brothers for the rest of my life.

Games took a toll on me this weekend. I didn’t know if I was going to have the fortitude to finish Outlast and the world of Brothers may be one of the biggest surprises of the year. After all that these two put me through, I just want to play more games now more than ever before.

When was the last time a game really took it out of you?

The Horrible Gamer – Reflections on recent game sessions and a healthy dose of gaming culture. You need it. I need it.