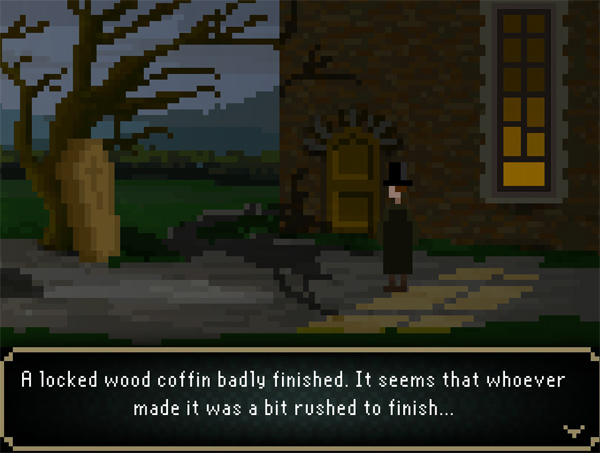 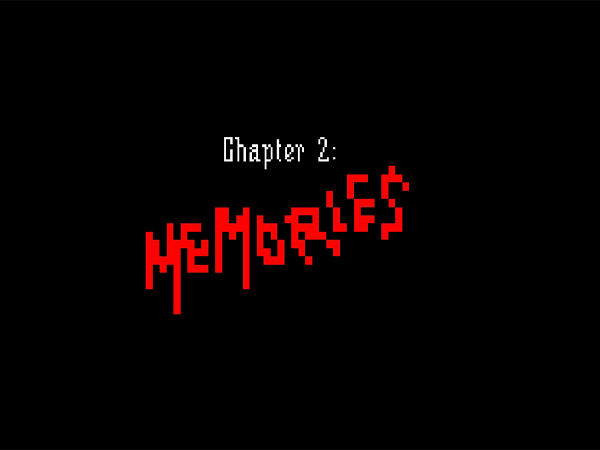 If you’ll recall, I stumbled across The Last Door in what can best be described as a “happy accident” while attempting to find a game for my weekly Cheap and Dirty Gamer series. I was immediately taken aback by the impact a seemingly simple point and click adventure game had on me, and as a result, I want to continue to follow up on this episodic series as chapters are released.

Note: I will do my best to avoid spoilers from Chapter 1, though should you be concerned go ahead and play through it before you read this.

I had every intention of publishing a review of the second chapter of the game last week, but a harsh case of “nerd flu” took me out of commission. This was a bit of a coincidence, however as “Memories” takes place in a sick ward that used to be the boarding school protagonist Jeremiah Devitt attended during his youth. The theme of illness, in terms of mental, physical and spiritual health is quite prevalent throughout as Jeremiah begins to unravel the mysteries behind the apparent suicide of his friend Anthony Beechworth. 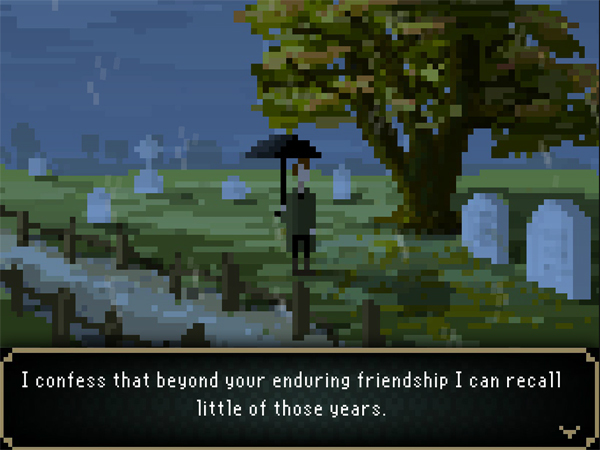 Poor Anthony, your death will leave a void that hopefully isn’t utilized by otherworldly forces in a campaign to retake Earth.

Like the Beechworth Mansion featured in Chapter 1, the boarding school has a very sinister air about it. It’s quite obvious that it is no longer the place of enlightenment Jeremiah remembers from his youth, but rather a place filled to the brim with the pain and suffering of those clinging to life and in some cases, sanity. Despite the simple retro graphical style, you’re constantly dealing with a sense of foreboding. You’ll curious about whats around the next corner while at the same time unsure if you actually want to face the darkness that’s entered into Jeremiah’s life. This is further complimented by some thoughtful sound design and an incredible soundtrack that fills in the blank left by the pixelated imagery. 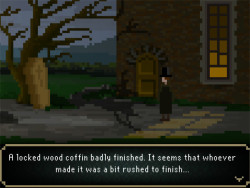 A coffin is never something you want to see when on a nostalgic trip through your childhood.

I’ll need to be very cautious about spoiling the plot as the plot is what will make or break the game for most people as story is the main entree in The Last Door series. What I can say is that the pace begins to build quite a bit as Jeremiah explores the boarding school while rehashing memories from his childhood there. While the story was never very cut and dry to begin with, it’s further complicated as Jeremiah is reminded of his days with the school’s Science and Philosophy group, which the now deceased Anthony was also part of. Boys will be boys. However, these particular boys appeared to have had some interests that were in direct conflict with the Catholic foundation the school was built on. While it’s not exactly spelled out, I get the impression that Anthony’s suicide may have been the result of guilt over a situation that is lightly touched on throughout the story.

While I definitely enjoy stories with a supernatural flair, I appreciate the fact that I wasn’t entirely sure whether what is going on in this chapter is actually supernatural. It feels supernatural though only because of the way Jeremiah views the world.  Because I don’t necessarily trust that Jeremiah has been relaying information very accurately (or at least his memories are too clouded) I’m not sure what exactly is happening or what will happen in the long run. That being said, the story has gripped me something fierce and I’m excited to see what happens next.

I thoroughly enjoyed chapter 1 of the Last Door and chapter 2 has only pulled me deeper into the creepy tale. I’d definitely recommend checking out the website and trying out the free demo as if you’re anything like me, you’ll be sucked in pretty quickly. Not only that, but if you decide to donate, you’ll get access to the soundtrack which is great and will make the perfect soundtrack for the coming Halloween season.