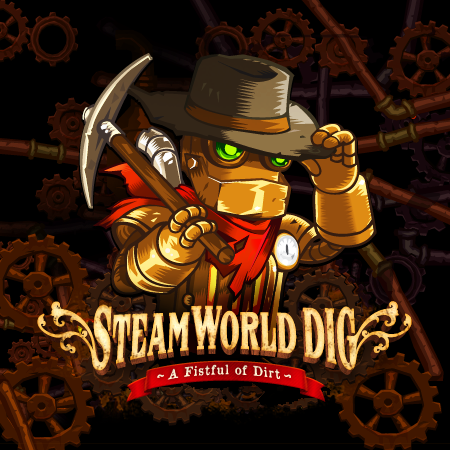 There existed a time where video game stories were just simple launch-off points for the player’s personal fun and imagination. SteamWorld Dig is a Western about steam-punk robots living above a sprawling mine full of riches and mysteries. Returning to town after the possibly untimely demise of his uncle Joe (not sure if robot deaths are ever timely), Rusty takes up his relative’s pick to find out just how deep the town mine actually goes.

Once in the mines, I found myself drawn to the simple act of removing earth to find riches. Rusty can swing his ax in the four main directions to make progress, with going sideways or downward being the most logical choices. Not that digging upwards is useless, but Rusty hasn’t been gifted with walking on air so the going gets trickier in that regard. Rusty is fortunate enough to stumble across several upgrade machines as he explores deeper, so it certainly becomes far more capable in traversing the depths. The townsfolk are also nice enough to exchange the gems Rusty retrieves for currency to buy items like ladders and upgrades for his ax and parts. It’s a tempting loop that kept me going back into the unknown. 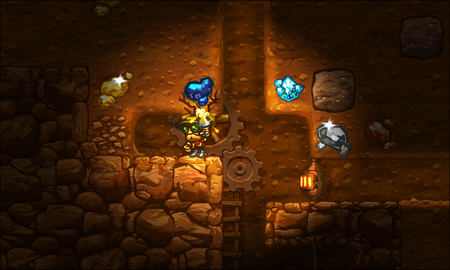 The soil is filled with more than just riches though. Strange and sometimes living remnants of old times are down there, waiting to give Rusty warm and dangerous hugs should he wander too close. Mindless bugs wander back and forth while zombie-like humanoids with a fondness for holding dynamite aim to ruin Rusty’s best laid plans in having a reliable means back to the surface. Combating these obstacles rarely proved too challenging, but I won’t lie about losing my riches as my robot body shut down after one too many run-ins with a spiky beast. The punishment isn’t too harsh, just pay a fine to be repaired and make a journey back to your dropped loot.

While the digging is simple fun, I could have stood to feel a little more challenge in my exploration. It hardly took long to get accustomed to the feel of an area, but the main obstacle to going further was time. Stronger picks are needed to move the increasingly harder soil, but money rarely proved an issue. Rusty is equipped with a lantern that eventually runs out of fuel and needs to be recharged, but the slight darkness was more of an inconvenience than a true hazard. I simply ascended (or even descended) to the nearest exit, still able to see the paths in front of me and the general layout on my mini-map. 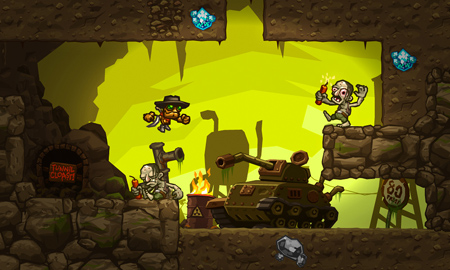 It’s hard to be mad at SteamWorld Dig about the overall lack of challenge when I was simply so charmed by the game. The western vibe resounds in every twang of the guitar and the town above the mine is as dusty as they come. Although, I had to be very conscious of the long clanging of my pick chipping away at ores when my wife was nearby as I was completely caught up in exploring the mine and looting everything.

SteamWorld Dig is yet another example of the kinds of games I want when I search the eShop. Reasonably priced, stylized and, most importantly, fun offerings that can keep the 3DS in my hands for a weekend or longer. I had long since moved away from my obsession to own carts and cases, but a game like this remains the perfect digital example to look to beyond the physical ones. My time with SteamWorld Dig might have ended sooner than I wanted, but the journey to the center was worth the ride.