I have mistreated all of the Valve games. As The International approaches and I continue to fight off playing Dota 2, I realized that even though I have tremendous respect for all of the company’s games, I have yet to ever completely lose myself in one of them. I even tried calling myself out for Half-Life 2, yet the game sits unfinished. I’ve been venturing back through my game library (thanks in no small part in trying to see which games do and do not have Steam Trading Card support) and visited two other Valve games that were on opposite ends of the spectrum of my neglected list. 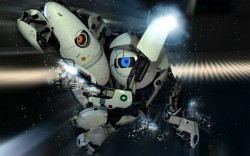 I will never be this close to Portal 2.

I technically finished Portal 2 when it came out. Actually, it is probably the Valve game that I put in the most honest effort into playing “correctly.” That is, I beat the game in two sittings. I actually recommend playing Portal 2 in as few sittings as possible, but don’t make the mistake I did and separate those sittings by long stretches of time. I revisited the first 2 chapters of the game, and I barely remembered them other than the major story beats. It really is amazing just how well written and well paced Portal 2’s single player story is. I just wish I could have selective amnesia with the puzzles and experience them for the first time every time. I also wouldn’t mind finding a co-op partner who has selective amnesia so that I can finally run through the co-op campaign because I definitely failed Atlas and P-Body.

There’s a strong chance that if I ever got my shit together, Left 4 Dead 2 would be my favorite Valve game. But as it stands I have only ever completed 2 campaigns in the entire series. On one hand, I didn’t mess up and just play the game single player with AI controlled partners, but I have not made a good enough effort to bring friends together to actually play through all of the campaigns. That doesn’t even include the other game modes which I haven’t even touched. Playing as a zombie is what first put this game on the map for me, yet I won’t allow myself to do it until I play more of the primary campaigns. The only loser in this scenario is me, because every single time I play the L4D2, no matter how badly we do (and we tend to be full of more failure than usual) and how many times I panic, I absolutely love it. I love setting off car alarms like an idiot, I love throwing pipe bombs, I love thinking I can take this Witch one-on-one,  and I love missing every headshot when it counts. So come on, why wouldn’t my friends want to play with me?

The real takeaway from all of this, to all of those video game perfectionists out there is – Don’t wait for the perfect time or perfect group to play a great game. Just play the great game. Had I just joined some public groups or bribed a puzzle-proficient acquaintance, I wouldn’t be pining for the best moments that I know are still yet to come with some of the best games ever made.

What great gaming moments are you still holding out for?

You and your bro will never look this cool: