Justin mounts his ballista to defend the fabulous eyebrows of his king in CastleStorm. If he ever stops shooting his own troops, he may learn just how satisfying it can feel to crumble an actual castle. 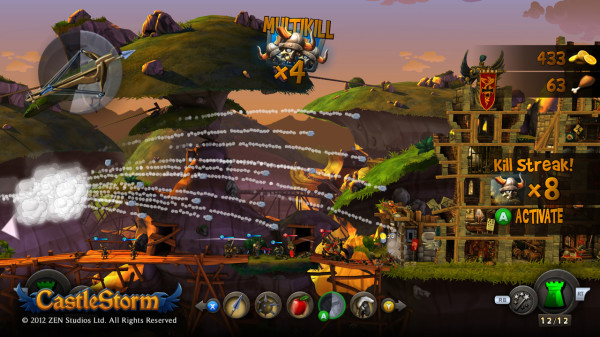 My first play session with CastleStorm left me a bit conflicted. Here we have a real-time strategy game with plenty of action elements, that I’m judging based on the introduction to the single player campaign experience. What surprised me the most was how much CastleStorm wants to hold my hand when all I want to do is slam my enemy’s castle as hard and fast as I can just to see it crumble. CastleStorm hides all of its chaotic fun behind a methodical learning curve, but graduates will be rewarded with a satisfying victory among the rubble.

CastleStorm’s biggest enemy is its first impression. There’s a lot going on in a CastleStorm battle and it isn’t immediately apparent what all is happening and therefore which players the game will appeal to. It features two castles each equipped with a ballista, an army of varied medieval troops that march out to meet on the battlefield, and a hero unit who thinks this is his own private hack-and-slash adventure. I’m good at maybe two of those things, and that’s only if I’m only worried about one at a time. Controlling all of this at once, on top of upgrades for all of the above, and customization options for the castle itself requires much more patience than I initially had on hand. It wasn’t until I began to see how all of the pieces work together into a cohesive battle strategy, that I began to understand why CastleStorm didn’t want to throw me to the wolves (who, it turns out, actually work for the vikings).

This highlights a problem with a lot of tutorial levels in games, especially those that are wrapped into a story mode. Some gamers need to be inched along and shown a single mechanic at a time, while others, like me, prefer to actually fail a few times just to get their bearings. Appealing to both the players that want to read each step of the instructions and be quizzed after each section, and the players that just want try it out and ask questions later is a battle that a lot of strategy games lose. CastleStorm almost lost me, but my last few battles revealed thrilling shifts in momentum that made me hungry for a lot more.

Good lookin crew you got here

While the story mode didn’t really engage me personally, Zen Studios impressed me with the overall presentation and the well-developed game universe of CastleStorm. The art and characters models reminded me of the timeless designs of Warcraft III, which is never a bad thing. The characters in the story and your field units in battle have their own silly personalities that make them memorable in better ways than just identifying them by icons in the menu. The only things holding me back from being absorbed in the world of CastleStorm was that the dialog itself is forgettable. The support/battle sounds, as well as the music, are also a bit generic when they should have been used to accent the highlights of the action to prevent monotony from setting in too early.

Once CastleStorm gets out of its own way and the heat of the battle starts ratcheting up, it comes into its own as a exciting and competitive strategy experience. The gamepad controls are incredibly well designed, making it easy to switch between destroying towers with your ballista, calling in more troops, and teleporting in your hero to protect your gate. As with any good fight things will get out of control on the battlefield, but the mark of a great strategy game is that it can keep up with the chaos to allow for your success to be solely dependent on your personal ability to execute on your quick decisions. CastleStorm may not trust you at first, but after you have bled together, both of you will be kicking castle asses with the best of them.

CastleStorm is available now on PC and XBLA.