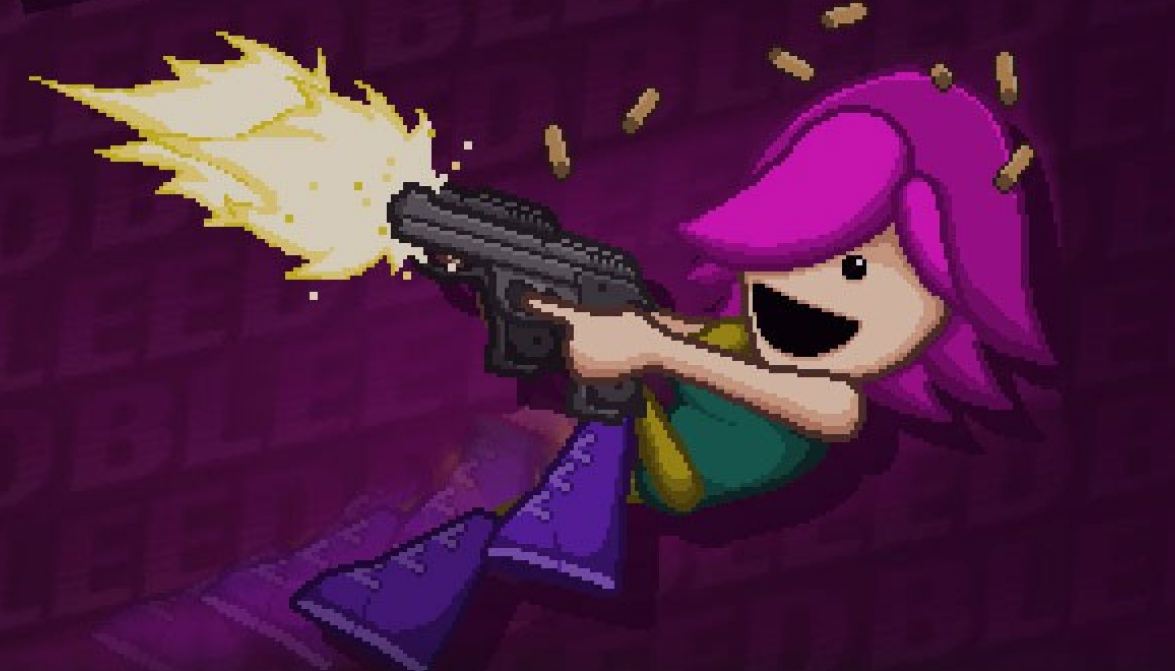 It always looks fun to dodge a helicopter in bullet time, but making it feel fun is just one of the things that Bleed gets oh-so-right. Justin had no idea just how much action this game was packing and Bleed let him have it. 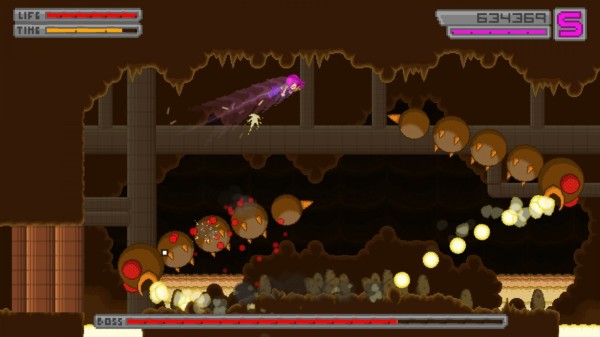 There’s no reason Bleed should work. When you combine a fast-paced 2D platformer with a twin stick shooter, there’s just too much that can go wrong. If you  want to add in bullet time and a ridiculous flying triple jump on top of the chaos, and I’m going to tell you that the controls are going to be inaccessible at best. If you still move forward with the game, I hope you have a big team of experienced developers who know the ins and outs of platforming. It turns out, that I have no idea what I’m talking about because Bleed was created by a one man (Ian Campbell AKA Bootdisk Revolution) development team and it could not be more fun. Bleed will also kick your ass and you will love it for it.

Bleed stars Wryn, a pink-haired girl who wants to become the “ultimate videogame hero.” She has some crazy moves, skills to match, and tons of guns to get the job done. In Bleed, she sets out to defeat the “Greatest Heroes of All Time” so that she can redefine that title herself. Now, that’s a noble cause that I can put a controller behind.

Bleed wants you to play it fast and loose, but its going to take some training for you to get there. The tutorial portions of the first level are well paced and introduce you to Wryn’s core abilities one at a time. When playing with a controller, shooting is handled with the right stick and the right trigger jumps. This combo feels a bit foreign after playing so many other platformers that allow you to jump using a face button. However, once you get into the flow of the combat it not only allows you to kick ass from all angles but it begins to feel right for your thumbs. As a discriminator against felines, I also enjoyed having evil (assumption) cats as some my first targets.

The action ramps up pretty quickly with tons of targets to shoot and dodge. Thankfully, Wryn can slow down time a bit using the other trigger which allows for some precise shooting and acrobatic escapes. The time meter does take a moment to recharge so you can’t abuse it, but you will be using it pretty consistently in order to survive.

Nothing better for target practice.

Survival is key because Bleed is not easy. The game doesn’t get off on its difficulty like some other brutal indie games, but practice and repetition is required to advance. Thankfully, there are checkpoints aplenty, but impatient players may get frustrated by the time they come across the first mini-boss (a freaking helicopter). Overcoming the helicopter will either make or break your Bleed experience. The battle forces you to use all of the skills you’ve learned to that point which in turn forces you to pull off some really sweet and satisfying maneuvers. Once I blew up the helicopter, I was ready to take on the world with Wryn.

The only knock I have against Bleed is that the music and sound effects can’t keep up with the action on screen. It’s not that the sound is bad, it’s that is forgettable and missed the opportunity to push the whole experience up to an 11.

It will kick you when you are down, but Bleed absolutely exhilarating to play. Its lessons make you a better hero capable of effortlessly pulling off epic maneuvers that will earn Wryn her title and you some more memories on your own gaming highlight reel.

Bleed was released on July 3, 2013 on Steam and is available for PC, Mac, and Xbox Live Indie Games.