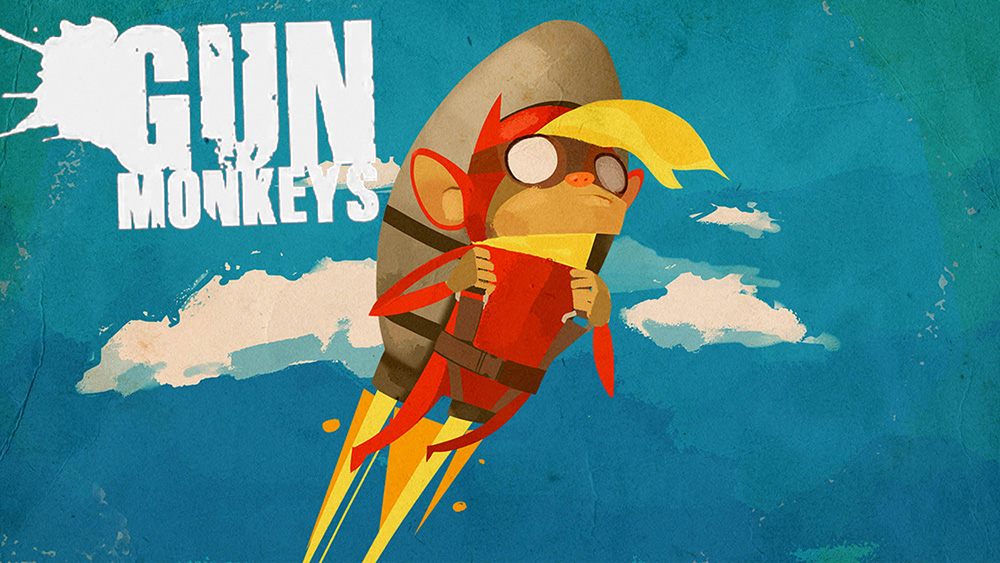 Justin and Coop, deathmatch aficionados, take to the Gun Monkeys arena to see just how competitive platforming primates can be when given crazy weapons, bombs, and the insatiable desire for more power.

As the plot goes, Gun Monkeys depicts an energy crisis that obliterates all human life on the planet. “Expendable monkeys” are sent forward in the future to collect and send back Power Cubes to present-day. When other monkeys show up with the same idea, the battle begins.

Gun Monkeys is a 2D platforming one-on-one deathmatch game with procedurally generated stages. Players must recover Power Cubes as they materialize in the level while fending off the other monkey with guns and bombs. Crates also appear randomly on the level that contain special weaponry like bigger, badder guns, power-ups for your monkey, or debilitating items hurt your enemy. When your monkey is killed, you are penalized by having to wait a few moments for a new monkey to be sent in and your power station loses a chunk of power points.

The action in a deathmatch game has to feel great. While the slow-motion deaths, varied weaponry, and 2D rag doll physics (to go along with the ever growing pile of monkey corpses) set up everything around Gun Monkeys’ action to be enjoyable, none of it is particularly satisfying. I never exactly cowered in fear from the weapons or sent my enemy running for the hills. It more or less felt like two wrestlers grappling in the middle of a ring full of fireworks until the smoke cleared and one of them had fallen to the ground.

Monkey movement and jumping is by-design very floaty, but I constantly fought against it to try to find a bit more precision in setting my shots and evading my enemy. In my short time with the game, the wall jumps and ledge grappling behavior of my character never clicked. I’d find myself attached to the wall at the worst possible moment, yet never quite able to grab onto it when/where I needed to. 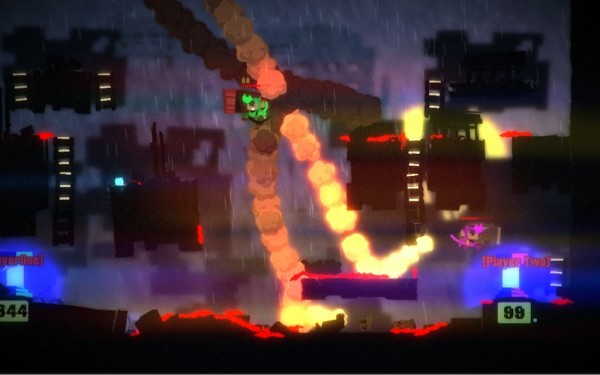 Do you feel anything?

The power stations are the central feature of Gun Monkeys. The point of the games isn’t to rack up your kill count or to get style points for using big weapons as in some deathmatch games. Your goal is to keep your power station full of energy. The match ends when your or your opponent’s power station energy level hits zero. I think the power station concept is a potentially brilliant support concept for deathmatch games. It adds a layer of strategy on top of the frantic action of trying to blow up your enemies. The problem is that Gun Monkeys’ other features aren’t good enough to make the power stations feel like any more than a means to balance out the skill difference between players.

Fling your poop, gimme something

While I appreciate Gun Monkeys simplistic style, the only portion of it that I truly liked was the blood physics when a monkey happened to lose a head or limb. The rest ended up looking like a blurry neon haze of vector shapes. Set against less than impactful sound effects and music, I was quickly clamoring for something about the game’s personality to get excited about. I did get more than a few laughs at some of Kevin Eldon’s commentary though.

Gun Monkeys is an awesome name for a video game, and it’s probably half the reason the game’s announcement stood out to me. Not every indie game can win the battle of having an effective title and Size Five Games nailed that one. Size Five was once called Zombie Cow Studios, who we discovered through its award winning sex eductional game, Privates. Developer Dan Marshall (@danthat) and his studio is one to watch. Based on Dan’s games so far, he has some truly weird and entertaining ideas in his head. Gun Monkeys, unfortunately, comes across as a more of a tech demo.

Gun Monkeys has the foundation for a really fun game. In 2013 though, when I’m in the mood to go one-on-one with a friend or strangers, there’s a lot of other video game options. I would have liked to see tightened up controls and physics, the inclusion of a 4 player mode, more impact from the weapons, and in-your-face killshots to give the action some real weight. Gun Monkeys can be charming and even a bit silly, but as it stands it is just a harmless monkey combat game. Gun Monkeys is missing a stand-out feature to give the player a reason to remember it enough to want to come back to play it again.