What a week of teases. I have to wait for Scott Pilgrim a few more weeks to show up on XBLA, Irrational Games made us wait all week for their announcement, and now people are talking about doing a Ducktales game? You don’t just throw that around, Mr Spector. 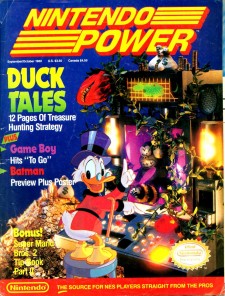 I dream of Scrooge McDuck

22 headlines distracted us last week, in reverse chronological order here’s the best from that list.

Look: Assassin’s Creed Brotherhood Collector’s Edition – Destructoid
I shouldn’t be as interested in this as I am, but I need a jack in the box.

Review: Scott Pilgrim vs. The World: The Game – Joystiq
This bodes well, quite well.

Scott Pilgrim pitch video shows an even more retro version of the game – Joystiq
Still crazy that this all looks to be coming together so well. Fingers are still crossed.

Borderlands DLC ‘Claptrap’s New Robot Revolution’ due in September – Joystiq
I wish every game could be supported this thoroughly.

Penny Arcade Adventures Episode 3 Being Released, As Text – Evil Avatar
I understand how it came to this, but reading vs playing doesn’t really fit their audience.

Irrational’s New Game Is BioShock Infinite – Giant Bomb
I dunno why I talked myself into thinking it wasn’t going to be a BioShock sequel, but the change of setting more than makes up for it.

Awesome father steals son’s games, sells them – Destructoid
Father of the Year candidate for sure.

id Tech 5 exclusive to Bethesda-published titles – Joystiq
Interesting. With the success of the Unreal 3 engine, you’d think they’d see some value in licensing this out.

Review of Monday Night Combat – Giant Bomb
Now to just convince others to give it a shot.

Warren Spector wants to make a DuckTales game – Destructoid
! It won’t be as good as the original hah.